The Government Dropped the Ball on U.S. Torture Accountability. Citizens Picked It Up.

Sheer stubbornness is required of us when our government violates the law and refuses to recognize it.

Seeking justice for the U.S. torture program of the post-9/11 period has required a lot of stubbornness. In North Carolina, a 12-year quest has led to a new report, “Torture Flights: North Carolina’s Role in the CIA Rendition and Torture Program.”

The report was released Thursday by the nongovernmental North Carolina Commission of Inquiry on Torture, a blue-ribbon panel of 10 commissioners established in 2017 after years of official inaction.

It examines the part that our state played in the CIA rendition, detention, and interrogation (RDI) program. To write it, the commission gathered all available evidence, sought public records from North Carolina government agencies, and heard testimony from torture survivors, former government officials, and legal, medical, and human rights experts.

After 9/11, the CIA created a global “gulag” of secret “black site” prisons where it systematically and secretly tortured. It also relied on foreign governments to torture prisoners.

For hauling prisoners — who were all Muslim — to and among these sites, the CIA turned to private aviation companies. Among them was Aero Contractors, which was — and still is — headquartered at the government-owned Johnston County Airport, half an hour from Raleigh. The company also operated a larger rendition jet out of the state-run Global TransPark in Kinston, 45 minutes away.

Aero was founded in 1979 by a former Air America pilot and has only one known client: the CIA. At last count, it had 130 employees at the Johnston County Airport. Its current activities are unknown. 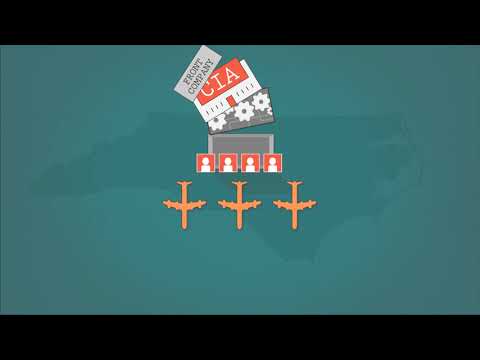 The Senate Intelligence Committee’s Torture Report, partially declassified and publicly released in 2014, named 119 men who were held and tortured by the CIA at one or more of its black sites. But, as the ACLU’s Steven Watt pointed out at the time, it did not cover the dozens of men whom the CIA rendered, often in Aero-operated planes, for barbaric torture at the hands of foreign proxy forces.

Our new report lists 15 of those not in the Senate report who were flown by Aero and calls for a full official inquiry into the fates of all who were rendered to foreign custody.

The report also finds that North Carolina played a larger role in the U.S. torture program than anyone previously realized. For the first, or “building,” phase of the program — from September 2001 to March 2004 — over 80 percent of identified renditions relied upon planes and pilots based in North Carolina.

The report further found that renditions were not just transportation to torture — they were an integral part of the overall process of torture itself. The Senate report focused on the “D” and the “I” in the RDI program: detention and interrogation. “Torture Flights” examines how renditions — the seizure and transportation experiences themselves — were deliberately designed as the first cruel steps toward dehumanizing prisoners with psychological and physical violence.

Directly on our consciences as North Carolinians are 48 men and one woman whose renditions were launched from our state. The youngest was 16 at the time of his CIA abduction, and the woman was pregnant. The report’s prisoner database provides flight logs of their renditions and what is known of their fates. At least four are dead: one in custody and three others after they were released. While a handful have received redress from other governments, none has gotten an acknowledgement, apology, or other redress from the U.S. government.

By refusing to act once the “torture taxis” were exposed by The New York Times in 2005 — the company, after all, continues to operate out of public airports — North Carolina officials have in effect endorsed the company’s torture-related activities. North Carolinians began protesting Aero in November 2005. The unbroken public silence of four successive governors — and two state attorneys general, one of whom is now Gov. Roy Cooper — has left commentary to Johnston County’s Board of Commissioners. Board members have on several occasions publicly praised Aero, harbored at their airport, and even defended the use of torture.

The report concludes that given the national policy of de facto impunity for U.S. torture, North Carolina should have long since opened a criminal investigation into Aero’s substantial role in it. State and county officials should join forces. They have a sound foundation on which to base such an investigation, including state laws that prohibit conspiracy to kidnap. In collaboration with local law enforcement, Gov. Cooper can and should deploy the State Bureau of Investigation.

When torturers face consequences for their actions, it will be a strong deterrent for anyone — or any entity — who might want to repeat their crimes.

The Horrific Stories of CIA-sponsored Torture That Aren’t in the Senate Report.

"A Train Wreck Waiting to Happen": Shocking Stories from the Senate's Torture...