One photo shows an Iraqi teenager bound and standing in the headlights of a truck immediately after his mock execution, staged by U.S. soldiers. Another shows a group of soldiers forcing a detainee to look at pictures of lingerie-clad women. Another depicts the body of Muhamad Husain Kadir, an Iraqi farmer, shot dead at point-blank range by an American soldier while handcuffed.

These are just three of thousands of photos related to cases of detainee abuse that our government refuses to release. We know little about the majority of these photos, but documents released to the ACLU over the last decade offer some clues to what they reveal. Today, on the 11th anniversary of the release of the Abu Ghraib photos, we're releasing everything we know about what's in the photos the government doesn't want us to see.

Six months before the Abu Ghraib scandal, the ACLU filed a Freedom of Information Act request for records, including photos, relating to the abuse and torture of prisoners in U.S. detention centers overseas. During the years of litigation that followed, we received almost 6,000 documents (all searchable in our Torture Database) illustrating these abuses, but the government has persistently refused to release the photos or give individualized reasons for withholding them.

She was reportedly sexually abused and assaulted and "made to crawl around on all-fours as a 'large man rode' on her,” striking her with a stick and calling her an animal.

Last month, indicating his impatience with the government's intransigence, U.S. District Court Judge Alvin Hellerstein ordered the government to "disclose each and all the photographs" relating to the ACLU's FOIA request — which includes some 2,100 pictures — or appeal the decision in 60 days. On May 19, the government will either release the photos or take the fight to the federal court of appeals.

We searched for mention of photographs in our Torture Database in an attempt to learn everything we could about what the government is hiding. By our count, more than 100 of the documents we received from the government either referenced photos related to cases of abuse or actually contained the photos, which were redacted before they got to us.

This spreadsheet details what we learned. The photos whose existence we discovered were taken at more than two dozen locations, mostly in U.S.-run detention facilities in Iraq and Afghanistan. There are also some photos from the prison at Guantánamo Bay. Many of them document autopsies and injuries, often resulting from abuse either alleged or confirmed. Other photos document detention facilities; many others are mugshots.

Some of these photos referenced in the spreadsheet were likely released with the Abu Ghraib disclosures, and thus are already in the public domain. Many of these have never seen the light of day. And while we can infer the contents in a number of the missing photos it should be clear that the scope is far from comprehensive. But what we found was instructive nonetheless.

In many of the cases, we deduced what was in the photos based on the investigations detailed in the documents, many of which dealt with alleged detainee abuse. In one case, prompted by the discovery of a photo, then-Secretary of Defense Donald Rumsfeld ordered an Army investigation after a photo was found of a female soldier "posing as if [she] was sticking the end of a broom stick into the rectum" of a detainee, bound and hooded in a stress position. The investigation found probable cause to believe the female soldier, as well as three other soldiers posing in the background of the photo, committed the offenses of conspiracy, failure to obey a general order, and cruelty and maltreatment.

But that kind of finding seems to be the exception rather than the rule. Many of the criminal investigations discussed in these documents were terminated after leads were lost, documents couldn't be tracked down, or witnesses couldn't be found.

Take, for example, the 2003 case of a 73-year-old Iraqi woman, who was arrested and flown by helicopter to an unknown facility where she was allegedly tortured for five days by U.S. soldiers. During those five days, according to the investigation, she was reportedly sexually abused and assaulted and "made to crawl around on all-fours as a 'large man rode' on her," striking her with a stick and calling her an animal. The Army's investigation began eight months after the fact and was closed in June 2004 after it "did not develop sufficient evidence to prove or disprove" the woman's allegations.

In another 2003 case, an Iraqi detainee was delivered on the verge of death to a U.S. Army medical center in Al Asad, Iraq. The detainee suffered from blunt force injury to the head and died a few days later. Investigators determined the detainee had most likely been interrogated at Abu Ghraib immediately prior to his arrival at the hospital and that his injuries were likely a result of a violent interrogation. One officer wrote in an email that the case was "obviously a homicide." Yet the investigation was closed with the identity of both the Iraqi victim and those responsible for his death undetermined.

Throughout the legal struggle over the photos, the government has argued that their release might incite extremists to violence, endangering Americans. That very same argument was made by some before the release of the executive summary of the Senate's landmark torture report. But, as we have argued before, this reasoning is both faulty and fundamentally undemocratic. As my colleague Jameel Jaffer has written:

"It's not just that the argument gives those who threaten violence a veto over political debate; it gives the government a veto, too. To accept the argument, at least in the absence of a specific, credible threat directed against specific people, is to give the government far-reaching power to suppress evidence of its own misconduct. And the worse the misconduct, the stronger would be the government's argument for suppression."

The Abu Ghraib scandal and its aftermath illustrated the power that photo evidence has to galvanize public attention and concern. To allow the government to suppress evidence of abuse is to invite a recurrence of that abuse in the future.

The big wheels in charge were very upset over this scandal. Those pics released to the world made their methods look bad. What sort of mentality would do these things? From the stories of homosexual rape against teen boys and others, rape is still rape. Denying riding a woman like a beast will not erase guilt if it happened. Why was it necessary to detain and put an elderly woman through all these things? Could the truth not have been found without resorting to the extreme measures taken against an old woman?

When you stoop to the measures of what is known about the prison abuses taken by those responsible, you have no moral high ground. You have lost your moral high ground and every good thing you were supposed to represent has vanished.

At least the Germans apologized for their part in the Second World War. Iraq had nothing to do with September 11 and they were punished horribly for their lack of involvement.

At last we must ask ourselves what we are, what we stand for and how can we look in the mirror knowing we do this sort of thing. If we believe in any higher power, would we be willing to explain to that higher power why we did it and why we are any better than any other system to allow such things?

America is nothing more than illusion of freedom and liberty that is only seen by the ignorant. We have become a corporate run plutocracy with the best elected officials money can buy. We as a nation are approaching the tipping point.

The thought that no one will be prosecuted for these crimes is sickening. Things like this is why many of us on the Left will never rise to say "I am proud to be a American" I am not proud that this was done in our name.

I can think of much worse torture than being forced to look at lingerie models. These people torture their own people including women and children. And I'm not talking about riding them and pretending they are cows. They skull f#*k toddlers .

You ignore the sexual abuse and physical torture...and how about we find a 200 lb guy to ride on your mother's back after she has been molested and tortured? It doesn't matterone bit what "they" do or are alleged to do.. so many in the US like to say we are so much better...yet we send people with the mentality of emotionally disturbed adolescents to represent us and supposedly protect us all over the world.

Don't kid yourself. The methods used were far worse than looking at lingerie. Far far worse. Victims were left broken, their lives shattered. . Some of the people were completely innocent. When they were released, they joined groups that acted against Americans and others. Before Abu Ghraib there was no ISIS. Abu Ghraib atrocities act as a recruiting tool for ISIS, and would have done even if the photos were not released. Torture spawned further atrocities, and made Americans less safe as a result. Our troops were placed at risk because of it. American interests were harmed. The prospect of another terrorist attack greatly increased. 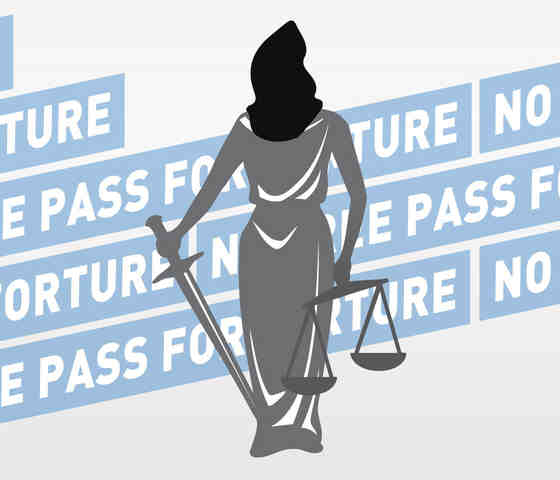