Last week, in response to a long-running ACLU lawsuit, the Defense Department released 198 photos relating to prisoner abuse by U.S. military personnel in Iraq and Afghanistan. These photos are disturbing, but they are almost certainly less disturbing than the approximately 1,800 pictures the government is still keeping secret — and we’re still fighting for those in court under the Freedom of Information Act.

The photos we did get mostly show close-ups of body parts — arms, legs, and heads, many with injuries. There are also wider shots of prisoners, most of them bound or blindfolded. The government didn’t provide any information about the human beings depicted or the contexts in which they were photographed.

But with a little digging, we were able to learn about the stories behind them. Sixty of the 198 photos have legible Army criminal investigation file numbers printed on them. We used those numbers to search our Torture Database, which contains some 6,000 reports, investigations, emails, and other documents the government has been forced to release to us in the course of our 11-year-old FOIA suit.

We found 14 separate cases of alleged or proven detainee abuse relating to 42 of the photos. Here’s what we learned. 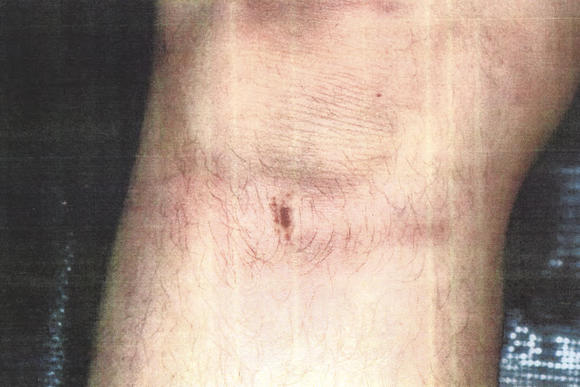 This photo most likely depicts a wound on the arm of Iraqi Major General Abed Hamed Mowhoush, who was detained, tortured, and killed by U.S. forces near Al Qaim, Iraq, in November 2003. According to an U.S. Army investigation, U.S. officials wrapped Mowhoush in a sleeping bag, tied an electrical cord around him, and suffocated him to death. American officials first reported that he died of natural causes, denying all charges of abuse, but Mowhoush’s autopsy report, finalized almost three months after he was killed, found his cause of death to be “asphyxia due to smothering and chest compression” and labeled it a homicide.

After more than two years, the Army determined there was probable cause to believe several U.S. military personnel committed a range of crimes, including murder, aggravated assault, and obstruction of justice. 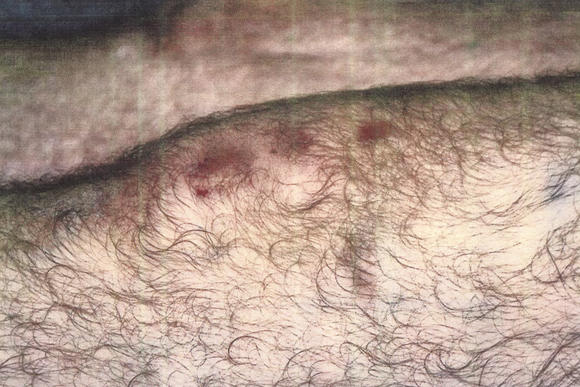 This photo most likely depicts the injured leg of Manadel Al-Jamadi, an Iraqi man captured by Navy SEALs in November 2003 and tortured and killed by CIA interrogators at the Abu Ghraib prison. The gruesome details of Al-Jamadi’s abuse and killing earned worldwide notoriety when photos of U.S. soldiers posing with his mutilated corpse were released by news organizations in 2004.

Navy SEAL team leader Lieutenant Andrew Ledford was the only U.S. official tried in military court for crimes related to Al-Jamadi’s torture and death. Ledford was ultimately acquitted of striking Al-Jamadi and lying to an investigator. 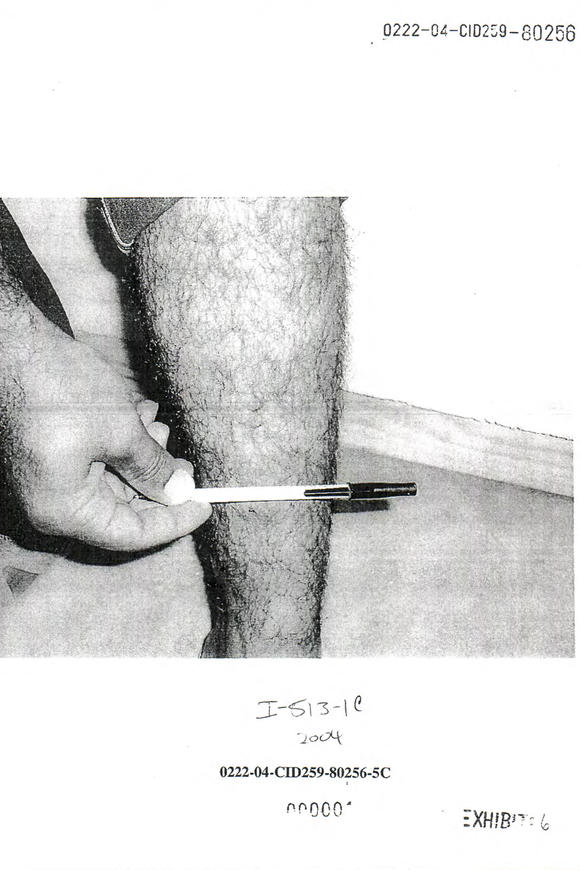 This photo of what appears to be a man’s leg relates to the case of an unnamed Abu Ghraib detainee who alleged he was beaten while detained by U.S. forces. The Army’s investigation determined that the detainee was most likely abused by Iraqi officials and dropped its investigation. 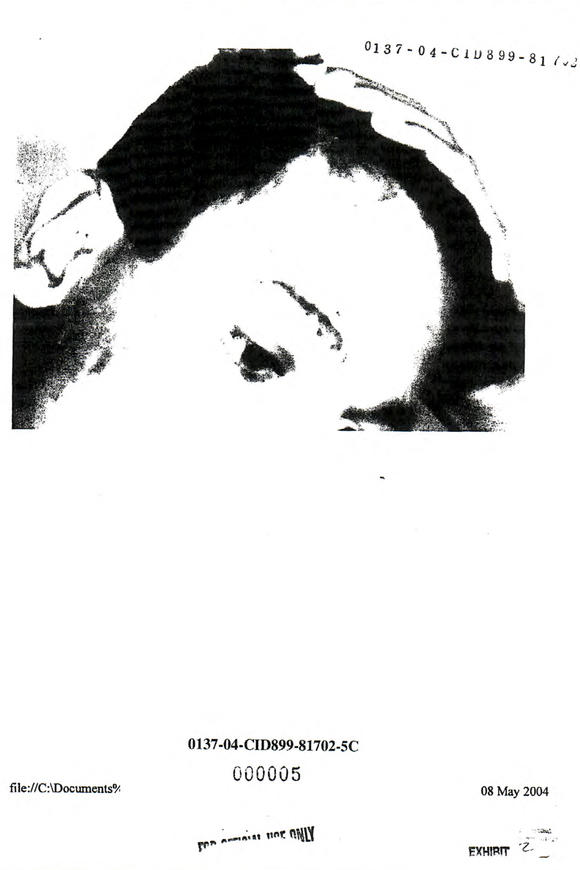 This photo is connected to the case of two Iraqi detainees — a man and his nephew — who were beaten by an unnamed U.S. sergeant while blindfolded and handcuffed in the back of an Army truck near Baghdad in May 2004. One detainee suffered a broken clavicle and injuries to his face, head, and back. The other had his face severely beaten. The Army’s investigation indicated the sergeant had committed aggravated assault, and a military attorney recommended that the sergeant be prosecuted. We do not know whether this recommendation was followed. 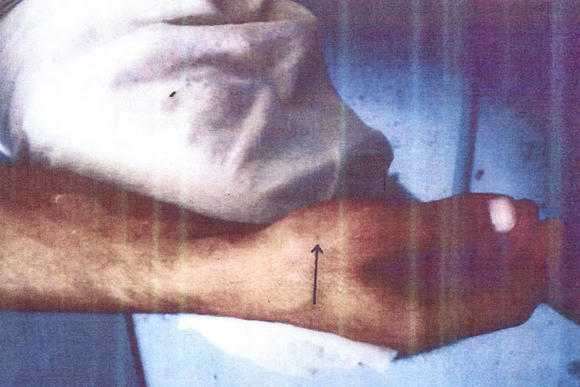 This photo relates to the case of a detainee at Camp Bucca, Iraq, who alleged he was slapped and shocked with a Taser by a U.S. official in June 2004. Army investigators were first notified of the incident by a master sergeant who witnessed another sergeant hit the detainee repeatedly. The investigation was dropped in part due to lack of evidence and the detainee’s diagnosis of depression, which, the report asserted, made him “not a credible source of information.” 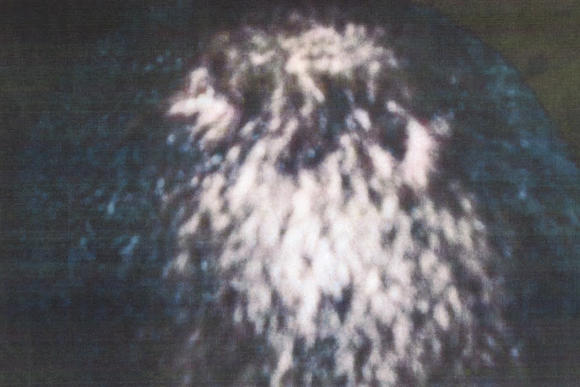 This photo of what appears to be the top of a man’s head relates to the case of an Iraqi detainee who alleged he was tortured while detained by U.S. forces at an unknown facility in Tikrit, Iraq, in April and May of 2004. According to the detainee, American soldiers stripped him naked while he was bound and blindfolded, beat him repeatedly with a cable and stick, held him in a small box, and discarded medication provided to him by Army doctors. The investigation and charges against the accused soldiers were dropped because investigators were not able to collect “sufficient evidence to prove or disprove the allegations.” 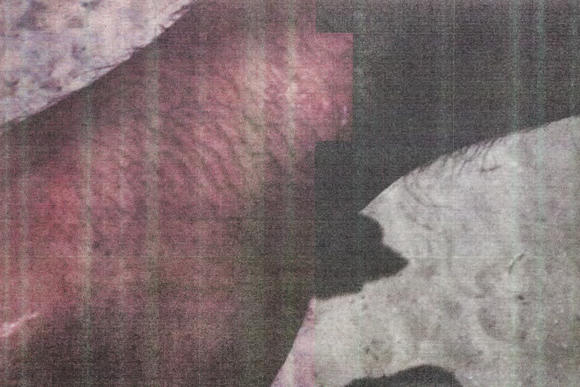 This photo is connected to an investigation into 10 U.S. soldiers who verbally and physically abused 44 detainees while they were escorting the prisoners to Camp Bucca, Iraq, in May 2003. One witness to the abuse, who reported that many of the detainees were suffering from previous injuries, said he or she watched a soldier “pull the prisoners off the bus … pick them up off of their feet and slam [them] down onto the ground and dig their face into the dirt.” Four of the 10 soldiers received a reduction in rank and an administrative discharge. The other six received no punishment. 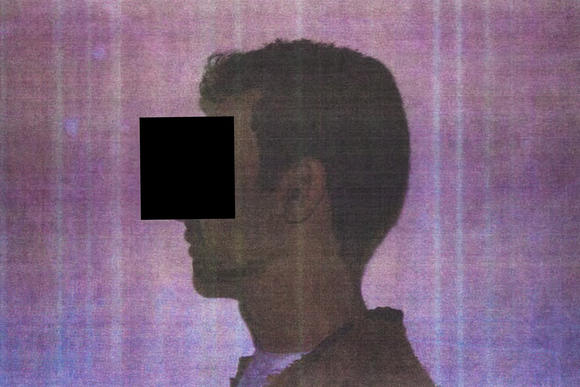 This photo relates to the case of a detainee who complained that he was forced into stress positions, punched, choked, and beaten until he lost consciousness by U.S. soldiers at Al Baghdadi detention facility in Iraq and by FBI agents at a facility near Baghdad International Airport. The alleged abuse took place in March and February of 2004. Medical screenings conducted after the alleged assault found the detainee was in “good health” and did not show signs of physical abuse, so the Army dropped its investigation. 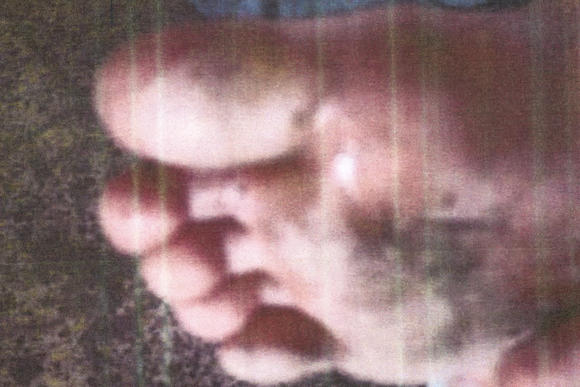 This photo relates to the case of a “high value” Iraqi detainee, who, according to a report by The Constitution Project, was Ibrahim Khalid Samir al-Ani, a Baathist intelligence officer wrongly accused of having met with 9/11 hijacker Mohammed Atta before the attacks. Al-Ani was captured by Joint Special Operations Command troops in July 2003. He told investigators that during his capture, he was forced to lie on his stomach in the back of a vehicle with his hands bound and head covered in a plastic bag. According to a letter al-Ani wrote, his captor “put his foot on my back and started screaming and cursing me in English, which I do understand. And after 15 minutes, I felt that one side of my belly and thigh started to burn due to the heated air that was coming out of the car. And the back of my feet started to burn. I asked the responsible to be careful but he did not care.”

Al-Ani was subsequently hospitalized for three months for extensive burn injuries, which required skin grafts and the amputation of one finger. While Army investigators determined there was “sufficient evidence to believe [al-Ani] was the victim of Assault and Cruelty and Maltreatment,” the investigation was ultimately dropped. 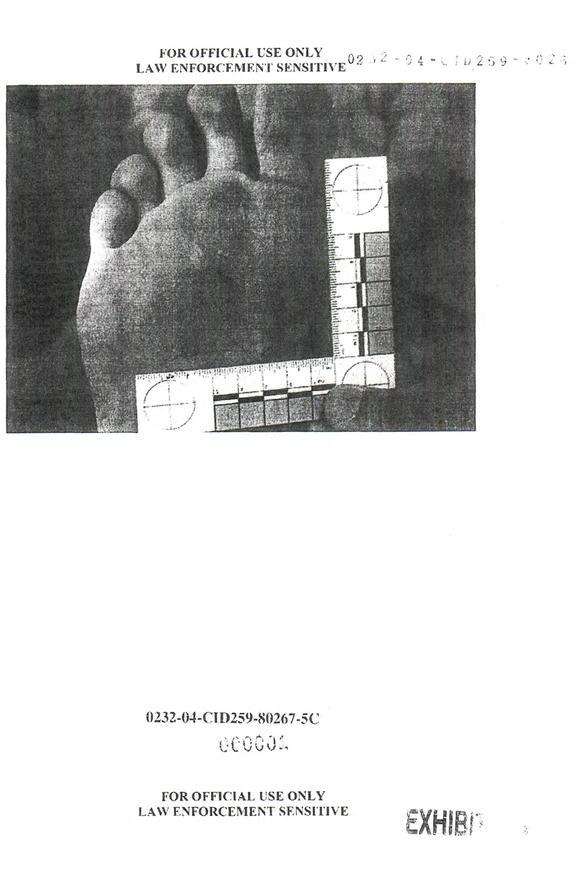 This photo shows the foot of an Iraqi detainee who alleged that during his capture by U.S. forces near Baghdad in June 2004 that he was “hooded, kicked several times in the body, and thrown into a barbwire fence.” He also alleged he was “forced to walk barefoot across hot pavement, which caused burns to the sole of his left foot” and beaten during his interrogation, resulting in the fracturing of several ribs. The detainee’s medical screening indicated he had blisters on the sole of his left foot but did not find any other injuries. The investigation was closed in October 2004, as officials determined there was “insufficient evidence to prove or disprove” the detainee’s allegations. 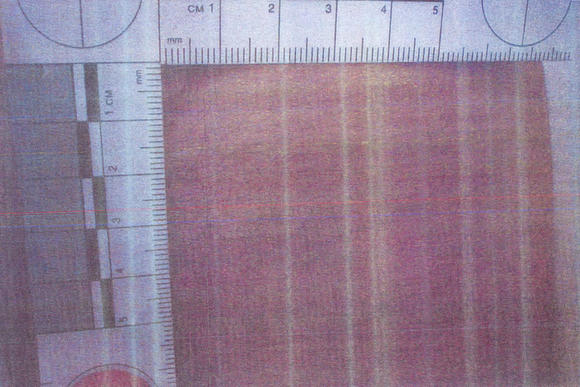 This photo is connected to the case of an Iraqi detainee captured in his home in Tikrit, Iraq, by U.S. forces in April 2004. The man told investigators that he was blindfolded, handcuffed, stripped naked, deprived of food and water, shocked with a Taser, and beaten repeatedly by five or six American soldiers and a Kurdish translator while detained at a military facility near Tikrit. At one point, the man said his face was covered in plaster so that he could no longer breathe, causing him to lose consciousness. In another instance of abuse, the detainee said his American interrogators hung him by his handcuffed arms to a hook, suspending him about three feet off of the ground. The investigation was closed in June 2005, as officials determined they lacked sufficient evidence to prove any of the detainee’s allegations. 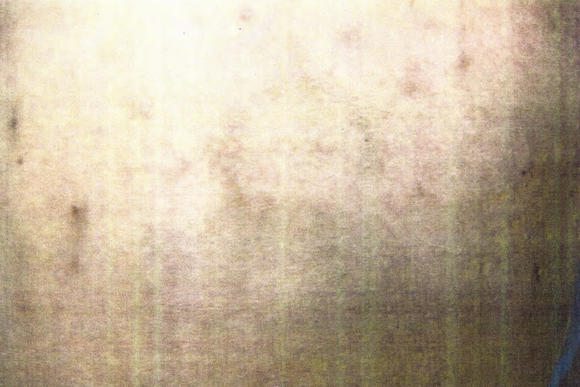 This photo relates to the case of a detainee who alleged that he was hooded, punched, and kicked by U.S. officials while detained at Muthenna Air Base near Baghdad in August 2004. The medical examiner, a translator, and two U.S. military guards corroborated the detainee’s allegations, which were disputed by the soldiers accused of committing the abuse. The accused were found not guilty after a court-martial proceedings. 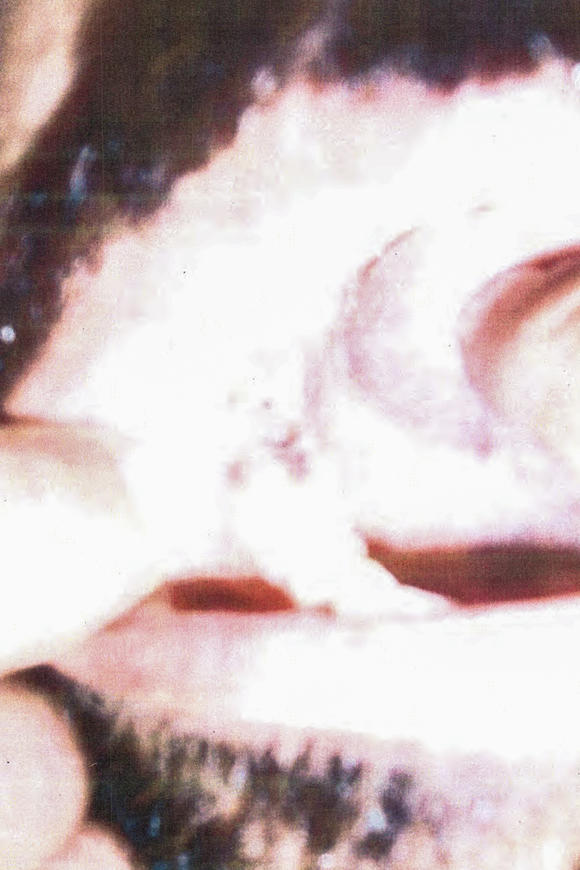 This photo relates to the case of a detainee held at a U.S. detention facility near Mosul, Iraq, known as the “Disco” in April and May of 2004. The detainee alleged that American interrogators tortured him by filling his jumpsuit with ice, then hosing him down and forcing him to stand for long periods of time, sometimes in front of an air conditioner; forcing him to lay down under bags of dirt so that he was immobile; hitting him with rocks; rubbing his face in urine on the floor; and breaking two of his molars. Army investigators determined that if the alleged offenses were committed, they were perpetrated by members of the U.S. Navy or Marine Corps, and turned the investigation over to the Navy Criminal Investigative Service (NCIS). We do not know what came of the NCIS investigation. 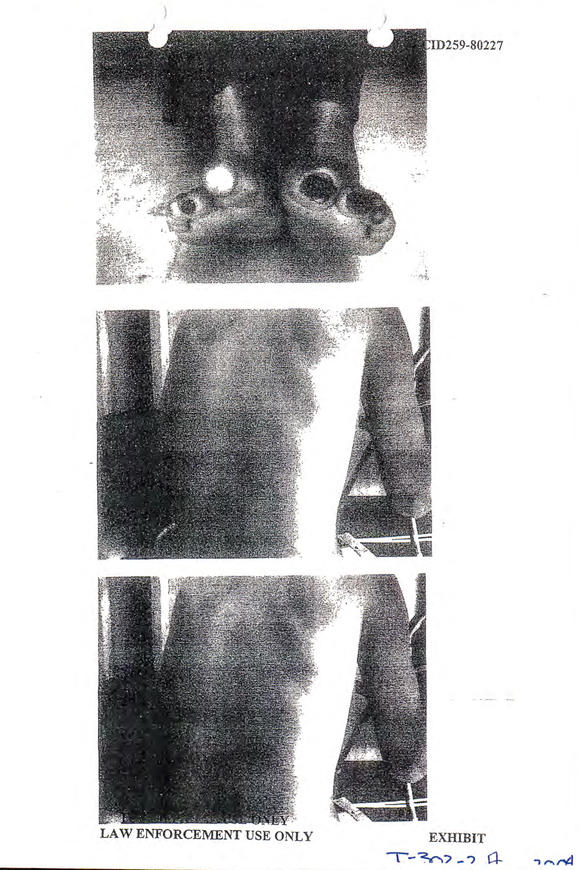 These photos are connected to the case of a 31-year-old Iraqi detainee who was captured by U.S. forces in March 2004 and detained near Mosul, Iraq. The detainee reported that he suffered a wide range of abuses at the hands of U.S. officials, among them being beaten, burned with hot water, deprived of sleep and food, dragged across stone, stripped, and doused in cold water. The detainee wrote in a statement that his interrogators “threatened me that they would bring my wife and my mother and that they would rape them if I did not confess.” The Army investigation found that “there was no wrongdoing by any of the persons involved in the apprehension and subsequent detainment” of the detainee.