A few years ago, one of our ACLU state affiliates received a request for help from a man who had set up a marijuana grow operation in his home. He was apparently quite proud of what he built, because he bragged about it not only to his friends, but also to his Facebook “Friends.” Unfortunately, one of his Friends was Friends with a police officer a thousand miles away in Florida. That police officer called up his colleagues in the man’s home town, and they raided his house.

It’s easy to write this guy off as stupid, and perhaps that’s true. But I think that it’s a textbook illustration of a point I’ve made a couple times before: the fact that social networks confuse our privacy intuitions.

The best breakdown of why this is so that I have seen is this 2010 slideshow by a Google user-experience expert named Paul Adams. Adams takes a prototypical user, “Debbie,” and traces how both her offline friends and her online Friends are drawn from different contexts in her life—from Los Angeles where she used to live, from San Diego where she lives now, from her family, and from her work training 10-year-old kids as a swim coach. Here is a slide Adams uses to visualize that: 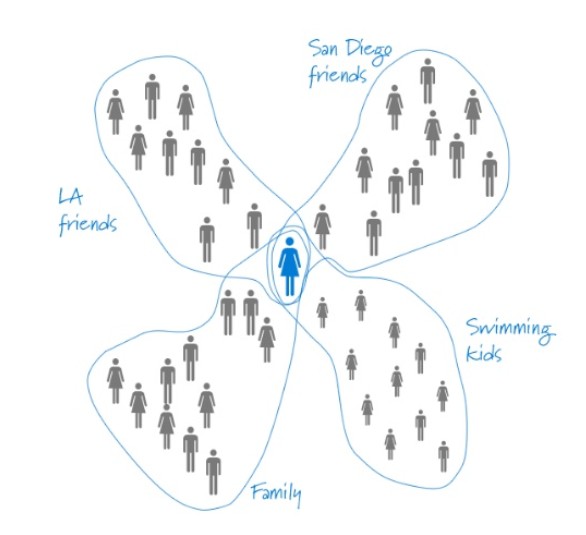 The problem comes when some of Debbie’s LA friends post pictures of their wild times at a gay bar, and Debbie comments on them—not realizing that this will make the photos visible to all her 10-year-old Friends from a different part of her life.

Adams’s analysis seems to have been reflected in the design of Google+, the “circles”-based architecture that I think matches our privacy intuitions much more than Facebook’s. (Facebook has retrofitted its network with the ability to create different groups—the equivalent of Google+ circles—but it has the feel of an add-on feature rather than core design, and my anecdotal sense is that few people make much use of it.)

What the story of “Debbie” illustrates is that social media can short-circuit the human skill at presenting different versions of ourselves in different situations—the ability to wear different “social masks.” There’s nothing phony about that—it’s a natural and normal part of what it means to be human. In an essay just last month in the New York Times Book Review, the writer Pico Iyer talks about how great writers are able to write in different voices, drawing different aspects of their complex inner selves into each “role.”

To some extent this is true of all of us. Look at your out-box: in the past hour you may have sent e-mails to mother, partner, boss and child, possibly even describing the same party. But each one is likely to have been written in a very different voice, and even to have treated the event quite differently—not to do so would be a form of insensitivity. “A man has as many social selves as there are individuals who recognize him,” as William James had it. It’s the man who doesn’t change his voice according to his audience who seems scary, locked inside his own assumptions.

This is a writer-focused way of expressing the same idea. When those delicate wires are crossed and we present the wrong self to one of our audiences—whether through our own mistakes or through invasions of our privacy—it can quickly become a source of humiliation. Even the most delicate difference in shades of meaning, presented to the wrong audience, can mean disaster.

But the problem is bigger than the fact that Facebook’s architecture encourages people to lump all their Friends together into one big group. What’s also at work here, I suspect, is the nature of online communication itself.

I think there’s a kind of bug in the human software that the digital age has brought to the surface. We are animals that are deeply programmed to adjust our behavior according to who is physically present. If we’re in a room with 40 people, and we’re only interacting with five of those people, we never forget the larger audience of lurkers in that conversation, and adjust our words to match. But if we’re in an electronic forum where 40 people are listening, and we’re only interacting with five of them, we are prone to forget about the other 35 people and come to feel that the five are our sole audience. When we have 1,000 Facebook Friends, which is not that uncommon, that dynamic is magnified. A thousand people is truly just a statistic, and all of the differences in how you would normally present yourself to all the sub-groups among those Friends fall by the wayside as specific people grab all your attention.

I’ve felt this personally, and I’ve seen it in action with colleagues, friends, and Friends. Most people, when they get on a stage in front of several hundred people or more, act in a very formal and circumspect way. That would probably be true even if the audience were entirely made up of various levels of friends, relatives and acquaintances. But on Facebook, many people say things to that large audience that they would never say in an auditorium.

And the same gaps in our intuition that make us prone to losing track of who our audience is, make us prone to forget that unlike in spoken conversation, virtually everything you say online generates a permanent written record—and one that is accessible not only by your Friends, but also by giant, international, advertising-based companies.

And that all holds true even for the minority of people who are on top of their privacy settings. It doesn’t even get to the fact that many people don’t understand the precise settings and defaults for who can see what of your online presence, and may not realize that what they say isn’t even limited to their Friends, but can be viewed by their Friends’ Friends, or even by the whole world if they really don’t have their privacy settings in line.

Perhaps somebody should create an app that takes the photographs of all your Facebook friends and assembles them together in a collage that you can print out and tape up next to your monitor while you share your exuberant opinions with your thousand Friends. That might close the gap between the reality of our online social interactions, and the way those interactions often feel to us.

Why Don’t We Have More Privacy When We Use A Credit Card?

Say No to the “Cashless Future” — and to Cashless Stores

Ruling Is a Warning to Companies Collecting Biometric Scans Without Permission