In December 2016, the Boston City Council held a hearing to discuss the Boston Police Department’s plan to spend $1.4 million on a social media surveillance system. Police Superintendent Paul Fitzgerald and Boston Regional Intelligence Center director David Carabin spoke of their commitment to transparency but did not provide any specific details about the software. After news of the plans became public, Boston Police Commissioner William Evans explained, “We’re not going after ordinary people. It’s a necessary tool of law enforcement and helps in keeping our neighborhoods safe from violence, as well as terrorism, human trafficking, and young kids who might be the victim of a pedophile.”

Ultimately, facing mounting public pressure and skeptical city council members, Mayor Marty Walsh and Commissioner Evans scrapped the costly proposal. But during the heated debate about the issue, and even in the city council meetings where the software proposal was discussed, Fitzgerald, Carabin, and Evans failed to mention an important fact that would have substantially informed the conversation: The $1.4 million plan to buy social media surveillance software wouldn’t have been the BPD’s first foray into social media surveillance. Indeed, since 2014 the BPD had spent $26,698 on a social media surveillance system called Geofeedia. During that time, the department secretly monitored the social media posts of thousands of ordinary Bostonians, including then–sitting City Councilor Tito Jackson — one of the critics of the BPD’s 2016 plan to buy the outrageously costly system.

Information about how BPD used Geofeedia would have been a welcome contribution to the debate, but now that we know more about how the department used the technology, it’s not so surprising that they failed to mention it. A report released today by the ACLU of Massachusetts details the BPD’s use of the social media monitoring software in 2014, 2015, and 2016, finding that troubling abuses occurred in secret. Based on records obtained through the Massachusetts Public Records Law, the report shows that employees at the Boston Regional Intelligence Center used the software to scan and collect thousands of posts containing specific terms on platforms like Facebook, Twitter, Instagram, YouTube, YikYak, and Flickr. The selected search terms targeted speech related to race, religion, and political activity, but they didn’t turn up any evidence of violence or terrorism. 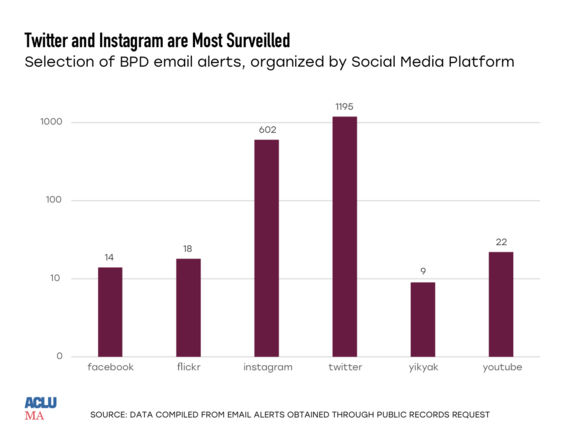 In 2014, during an initial trial of the software, the intelligence center monitored posts about the Black Lives Matter Movement by tracking words like “protest,” “#blacklivesmatter,” and “Ferguson.” Then-City Councilor Jackson came under surveillance during this time because of a Facebook post he made about racial inequality in Boston. After reviewing the ACLU’s report, former Councilor Jackson spoke to the AP: “I spoke out about [BPD’s] 2016 plan to spend $1.4 million on a social media surveillance system in part because I worried that the tool would be used to track people not because they did something wrong but because of their political views,” he said. “Little did I know that that had already happened.”

In 2016, the records show, BRIC targeted students involved in a walkout to protest budget cuts at Boston Public Schools. BRIC also targeted what its analysts called “Islamic Extremist Terminology” by searching for posts containing terms like “ISIS” as well as Arabic terms colloquially used by Muslims. The targeting of speech related to Muslim religious and cultural practice and the labeling of that speech as “extremist” raises serious civil liberties concerns. And according to the documents, casting Muslims as inherently suspicious served no public safety purpose; not a single of these posts appears to reference any violence or terrorism, apart from people talking or making jokes about political issues involving ISIS.

The BPD stopped using Geofeedia in 2016 after the ACLU of Northern California revealed that the company marketed itself to law enforcement as a tool to keep track of protesters. Even though the documents contain no evidence to suggest that Geofeedia helped the BPD prevent or solve serious crimes, the department nonetheless soon after requested $1.4 million for a new social media surveillance system.

In order to prevent something like this from happening again, the ACLU calls on the Boston City Council to create a standardized, public process for the BPD and other city agencies to adhere to before they acquire or use surveillance technology. The BPD, for its part, should change its policy to prohibit surveillance and intelligence collection on individuals based on their “race, religion, national origin, and protected political speech and association, except in cases where the Department has reasonable grounds to believe that a person has committed a crime and their protected activity or status is directly relevant to the investigation,” the report recommends. Additionally, the police should not collect or share the information of individuals “who are not suspected of specific articulable, criminal activity, with designated, enumerated exceptions for situations like missing persons investigations.”

Yesterday, three city councilors ordered a hearing on the city’s process for adopting new surveillance technology. The ACLU applauds the council’s leadership and looks forward to engaging in policy conversations to make sure Boston is a safe and free city for all of its people, no matter who they are, what they believe, or where they come from.

Why YouTube Shouldn’t Over-Rely on Artificial Intelligence to Police Its...