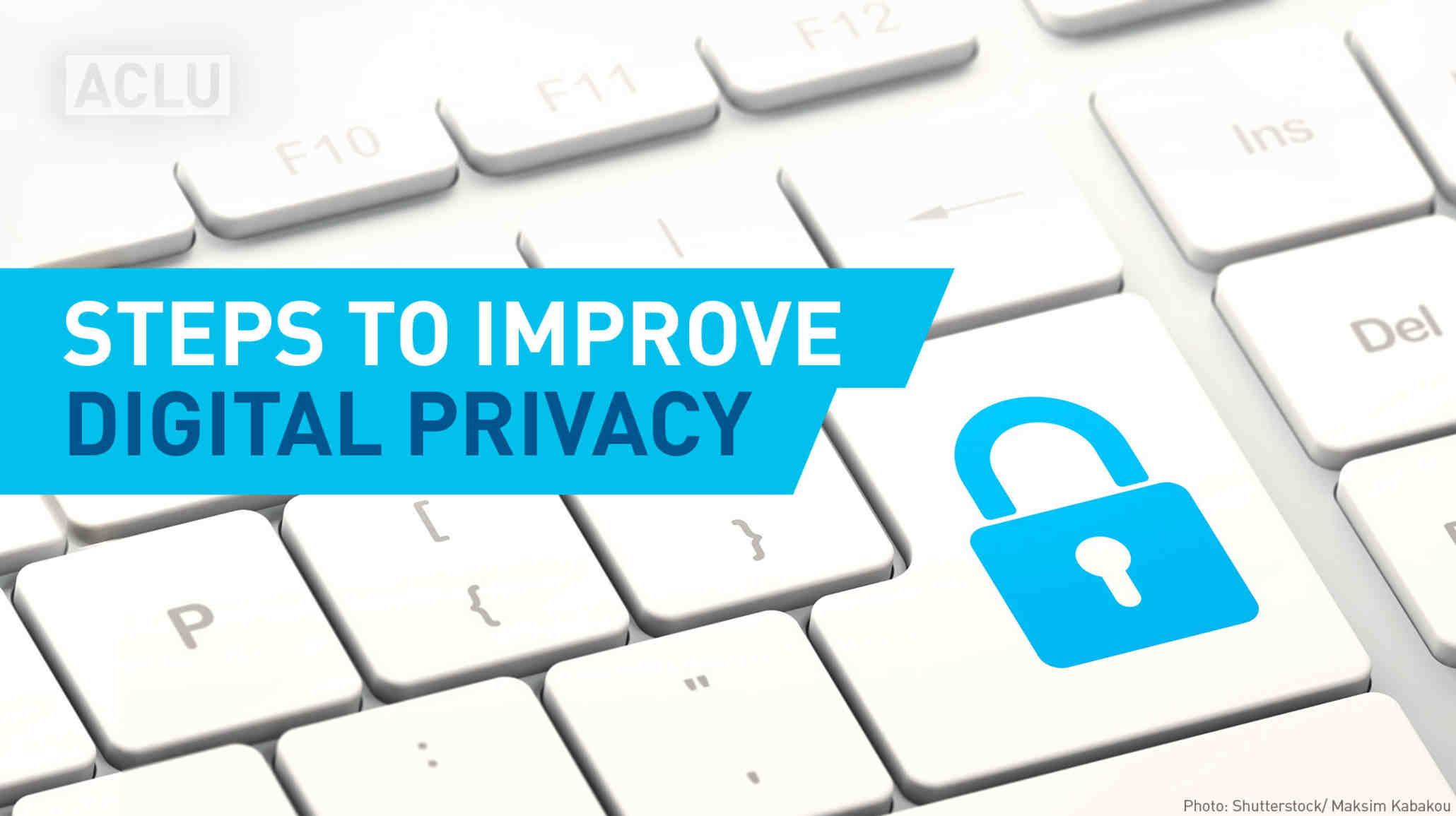 %3Ciframe%20thumb%3D%22https%3A%2F%2Fwww.aclu.org%2Fsites%2Fdefault%2Ffiles%2Fstyles%2Fvideo_thumbnail_1030x580%2Fpublic%2Ffield_image%2Fvid16-digitalprivacy-thumbnail-v01.jpg%3Fitok%3D66Z_uLln%22%20class%3D%22media-youtube-player%22%20width%3D%22576%22%20height%3D%22324%22%20title%3D%22Steps%20To%20Improve%20Digital%20Privacy%22%20src%3D%22%2F%2Fwww.youtube-nocookie.com%2Fembed%2FvSQQXS3q1k8%3Fwmode%3Dopaque%26amp%3Bmodestbranding%3D1%26amp%3Brel%3D0%26amp%3Bshowinfo%3D0%26amp%3Bcolor%3Dwhite%26autoplay%3D1%26version%3D3%22%20frameborder%3D%220%22%20allowfullscreen%3D%22%22%3EVideo%20of%20Steps%20To%20Improve%20Digital%20Privacy%3C%2Fiframe%3E
Privacy statement. This embed will serve content from youtube-nocookie.com.
Updated on November 14, 2016.
Much of the privacy protection we need in today’s world can’t happen without technological and legislative solutions, and the ACLU will continue leading the fight for digital security and privacy through our litigation and advocacy efforts. But there are simple steps that everyone can take to improve their digital privacy. While there are many advanced techniques that expert technologists can deploy for much greater security, below are some relatively basic and straightforward steps that will significantly increase your protection against privacy invasions and hacks.
Please note that although we mention a few services below, we don’t endorse any particular services or products as they can change rapidly.
Remember: You will never achieve absolute security from privacy invasions, but you can make great gains in fighting surveillance by government, companies, or hackers with steps such as the above.
Note: This blog will be updated regularly as technologies and circumstances change. If you think something is out-of-date, please let us know in comments.
View comments (17)
Read the Terms of Use

How about Microsofts recent shady activity by doing millions of forced upgrades (calling it update) to win 10. So many documented problems of not being able to revert back to orig OS without much problems. Losing non MS apps, and so much more. Why would they do this? Their goal to reach a certain amount of upgrades by a certain date & the fact that they just acquired linkedln may be the big reason. They had to have so much money on order to acquire the 2nd largest operating system company. Isn't this a monopoly? The government has put a stop to big co. monopolies in past. Why not now? This is a major abuse of their power/leverage so why is no one talking about it? Are they that scared that MS will fudge with their systems? I'm a disable homebound sr. and if my pc is messed up from this forced upgrade, I can't afford a new pc. What they are doing is soo soo wrong! To millions!

Please elaborate on your concern. I am not understanding the issue you are trying to explain.

Microsoft has not acquired the 2nd largest operating system company - LinkedIn is a social network, like Facebook or MySpace, not an operating system. It's a diversification, not a monopolisation.

They're pushing win10 upgrades because maintaining security upgrades is hard enough when they support thousands of combinations of hardware (unlike Apple, which supports very few), but doing it across multiple OS versions makes it harder still. Win10 is troubling for other reasons, some of which you've mentioned, but frequent updates are not one of them, in my opinion.

You don't need a new PC if the OS isn't to your liking or doesn't run well - there are plenty of open source alternatives which may suit (although it'll be a new set of applications to get used to). Ubuntu 16.04 is pretty good for privacy, or if your PC is older a remix like xubuntu might run a bit better.

Totally agree! I was hijacked.

why on earth would you use MS

Do not sell my information to any other site.

A clientless (aka: you don't have to download anything) software option that provides secure, anonymous and open access to the Internet and allows people globally to use on any device (even those that are not their own), is CGIProxy. CGIProxy is written and maintained by Berkeley Institute for Free Speech Online. It has to be installed on a server somewhere outside of the censoring filter; and one installation can then be used by many people. For more information visit freespeechonline.net/work/

No ad blocker? Seriously? Simplest way to drive down tracking with almost no inconvenience.

What about including adblocker to your list?
They protect from malware in advertising and can block ad-based tracking altogether.

I've been hacked, tracked, and had my privacy invaded by cops in my state for over 15 years, and since divorcing one of them.