“We have enormous computing power in the US government, but we need to be able to bring it to bear without the phone killing itself.”
- FBI Director James Comey, March 1, 2016.

In the FBI’s court order requesting Apple's assistance in unlocking the work iPhone 5c used by the San Bernardino shooter, the bureau's first and most urgent demand is that Apple disable the iPhone's “auto-erase” security feature. This feature (which is not enabled by default on most iPhones) protects user data on a device from would-be snoops by wiping the phone after 10 failed passcode attempts. This protects you and me from thieves trying to guess our passcodes and access our data for identify theft, for example.

But the truth is that even if this feature is enabled on the device in question, the FBI doesn't need to worry about it, because they can already bypass it by backing up part of the phone (called the “Effaceable Storage”) before attempting to guess the passcode. I'll go into the technical details (which the FBI surely already knows) below.

Let's look at how the FBI describes the situation. The court order's first and most urgently phrased request is to ask Apple to “bypass or disable the auto-erase function whether or not it has been enabled.”

To add urgency to their attempt to compel Apple to abuse their software signing keys, the FBI is painting a picture of “permanently inaccessible” data. But if its agents are doing their job, that's just not the case.

Here's where the technical details come in. The iPhone protects its user's data with a complex hierarchy of cryptographic keys. Some data is protected by multiple keys. Imagine a pile of letters and photos placed inside a locked box, with the box itself placed inside a locked filing cabinet. You'd have to have keys to the filing cabinet and the box to read any of the letters or see any of the photos. If either of these keys is destroyed, the letters and photos are lost forever.

When iOS decides to wipe out user data because the passcode guess limit has been reached (or for any other reason), it doesn’t actually erase all the data from its underlying storage; that would actually take several minutes. Instead, it just destroys one of the keys that protects the data, rendering that data permanently unreadable. The key that is erased in this case is called the “file system key”—and (unlike the hardwired “UID” key that we discussed in our previous blog post) it is not burned into the phone’s processor, but instead merely stored in what Apple calls “Effaceable Storage,” which is just a term for part of the flash memory of the phone designed to be easily erasable. Apple's iOS Security Guide explains:

Here's a picture of the front and back of main circuit board inside the iPhone 5c: 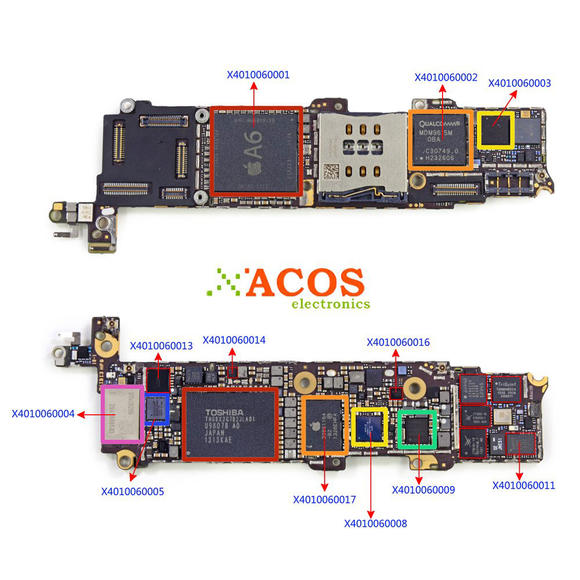 The large chip on the front marked A6 is the processor -- a custom chip designed by Apple specifically for its devices. It contains the CPU, BootROM, RAM, crypto engines, Apple's public signing key (used to verify software updates), and the UID key (see our previous blog post).

If the FBI doesn't have the equipment or expertise to do this, they can hire any one of dozens of data recovery firms that specialize in information extraction from digital devices.

NAND flash storage is an extremely common component. It's found in USB thumb drives, mobile phones, portable music players, low-end laptops—pretty much every portable device. Desoldering a chip from the circuitboard is straightforward enough that there are many clips on YouTube showing the practice, and reading and writing a bare NAND chip requires a minor investment in hardware and training that the FBI has probably already made.

If this generally useful security feature is actually no threat to the FBI, why is it painting it in such a scary light that some commentators have even called it a “doomsday mechanism”? The FBI wants us to think that this case is about a single phone, used by a terrorist. But it's a power grab: law enforcement has dozens of other cases where they would love to be able to compel software and hardware providers to build, provide, and vouch for deliberately weakened code. The FBI wants to weaken the ecosystem we all depend on for maintenance of our all-too-vulnerable devices. If they win, future software updates will present users with a troubling dilemma. When we're asked to install a software update, we won’t know whether it was compelled by a government agency (foreign or domestic), or whether it truly represents the best engineering our chosen platform has to offer.

In short, they're asking the public to grant them significant new powers that could put all of our communications infrastructure at risk, and to trust them to not misuse these powers. But they're deliberately misleading the public (and the judiciary) to try to gain these powers. This is not how a trustworthy agency operates. We should not be fooled.

Apple and Google Announced a Coronavirus Tracking System. How Worried Should...