We oppose stops by police when they are made because of the color of someone’s skin, or the way they dress, or because a police officer thinks a person doesn’t belong where they are. In the absence of illegal acts, these stops themselves are illegal. Rather than uphold the rule of law, they subvert it. They place the rights, freedoms, and lives of innocent people in jeopardy.

Anyone who tells you that we can make a community safer by stopping innocent people and harassing them is selling you a lie. But there is a way to combat warrantless stop and frisk: knowing your rights. And there are novel ways to spread this knowledge, including dance. 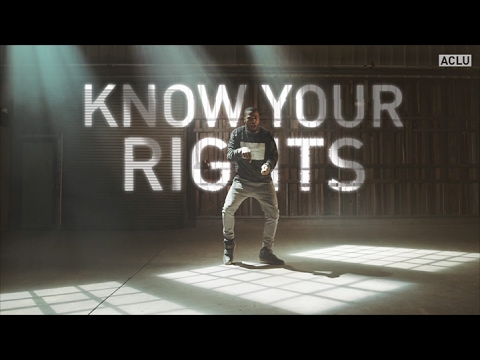 THE D.R.E.A.M. RING (DANCE RULES EVERYTHING AROUND ME), founded in 2011 by Reggie Gray and Jason Cust, is a community-oriented dance company rooted in a Brooklyn-born street dance style called flexing. These dancers tell the stories of their lives, their neighborhoods, the injustices they experience through moves like pauzin,’ connecting, get low, and bone breaking.

According to Reggie, “Flexing is a means of expression for people who feel like we don’t have a voice.” And one thing THE D.R.E.A.M. RING wanted to express was the pain and frustration of interacting with police.

Members of THE D.R.E.A.M. RING grew up in areas of Brooklyn where stops and frisks are a way of life. Knowing how to act and what rights they have during those stops was a critical step in preventing interactions they had with police from escalating.

Calvin Hunt, a D.R.E.A.M. RING dancer, knows this from experience.

One time he was in Brownsville, Brooklyn, getting off the subway when a police car rolled up to him. When the officers got out, Calvin immediately put up his hands and told them in a calm voice:

“You see both of my hands. You don't have to do anything unnecessarily. I'm not reaching for nothing. But, before you do ask me anything, and I tell you that I don't have to talk to you, my wallet, my ID, my work ID and everything is in my jacket pocket. If you need it, you can ask me to take it out and I'll take it out. No problem.”

Calvin believes if he didn’t act the way he did, the officers would have thrown him on the ground. “Knowing your rights saves your life,” he says.

As a way of empowering themselves and others, the company’s members impart what they’ve learned not only through this video but in high-profile performances around the world and in after school programs across New York City.

In this video, they teach the basics everyone should follow when confronted by an officer intent on stopping and frisking them:

Move slowly, with your hands always in sight, to give police less of a justification for physical abuse, which can neutralize the all-too-familiar police narrative that “it looked like he was reaching for something so I shot him.” Ask for a lawyer and assert your right to remain silent to help prevent police from twisting your words. Ask if you are free to leave. This may require an officer to admit that they have no reason to stop you at all. And, while refusing consent to search may not prevent an officer from searching you, it may raise serious questions about the legality of that search later on if you go to court.

Knowing and exercising your rights is not about confronting or physically resisting police officers. It is about surviving what could be a deadly confrontation. Sadly, acting intelligently and in accordance with the law during a police stop does not insure nothing bad will happen to you. Philando Castile had a permit for his gun, he told the officer he was armed, and he tried to produce his I.D. when he was ordered to do so. He was then shot and killed by police.

The reality of policing in America is grim, especially in communities of color. But against a backdrop of excessive force and racial profiling, knowing your rights still stands out as your best tool for protecting yourself. THE D.R.E.A.M RING knows this from their first-hand experiences, and they’re doing their part to spread the word. Join them and us.

The Trump Administration is Banning Talk about Race and Gender