These are the words that have been pre-filled on a cover sheet to the Madison County Sheriff’s Department Narcotics Unit’s case files. All other fields have been left blank. These words tell the story of racially biased policing in the county that begins before officers even go into the community.

The internal racism of the department represented in this form is just one piece of a larger body of compelling evidence that the sheriff’s department has a culture of racism that threatens Madison County’s Black community. 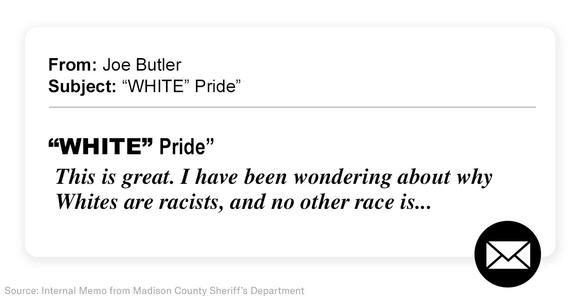 In June of, 2009, current Sheriff Randall Tucker, while a deputy under former Sheriff Toby Trowbridge, received and forwarded a racist email titled, “White Pride.” It contained the statements, “when I call you Nigger, Kike, Towel head, Sand-nigger, Camel Jockey, Beaner, Gook, or Chink . . . You call me a racist.” The email concludes by encouraging the reader to express support for its sentiments by forwarding it along, which Sheriff Tucker did. 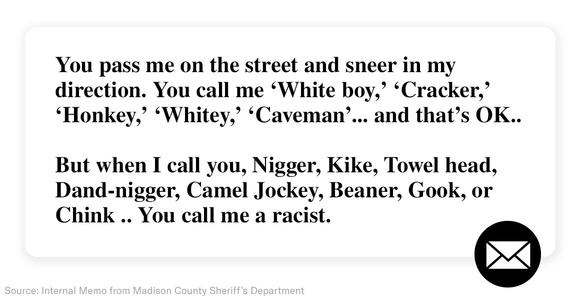 The ACLU of Mississippi, along with its co-counsel at Simpson Thacher & Bartlett LLP and the ACLU’s national office, uncovered these and other documents during six months of legal discovery before proceeding to file a motion for class certification on March 14, 2018, in Brown v. Madison County. In the case, we sued Madison County and its sheriff’s department for operating a policing program that targets Black people on the basis of race.

The problem, however, runs deeper — much deeper — than racist sheriff emails.

The Madison County Sheriff’s Department’s policy of racialized policing stretches back at least as far as the prior sheriff’s administration. In 2006, Black residents of Canton, Mississippi — a predominantly Black town in Madison County and the county seat — presented a petition bearing 664 signatures to the Madison County Board of Supervisors demanding an end to “frequent roadblocks in the predominantly black neighborhoods” and “racial profiling.”

The response? Former Sheriff Toby Trowbridge refused to even meet with the protestors.

Trowbridge denied using racial profiling and vowed to continue using roadblocks as a policing tactic, despite the evidence that they were disproportionately affecting Black people. His casual brushing aside of community outrage dovetails with the casual racism exhibited by the sheriff’s department. Tellingly, current Sheriff Tucker later pledged to “maintain the quality of law enforcement that we have under Sheriff Trowbridge,” and upon taking office in 2012, officially adopted all of Trowbridge’s policies.

The roadblocks and racial profiling continue to this day.

During his deposition in this case, former Sheriff Trowbridge testified about the use of racial slurs at the sheriff’s department by MCSD personnel, including by him, and a MCSD patrol supervisor testified that he has used racial slurs in the course of his duties and had not been disciplined. Far from being punished for racism, the department appears to have institutionalized it.

Other evidence and data collected during the discovery phase support the fact that MCSD has a longstanding policy of stopping and searching Black drivers and pedestrians who travel in Madison County on the basis of their race. For example, over 30 people, including the named plaintiffs, submitted declarations explaining their experiences with MCSD that reflect this racism — testimony that corroborates the existence of a racially biased policing program and the department’s abuse of authority.

Lawrence Blackmon, one of our named plaintiffs, was tackled, made to lay face down, and then handcuffed at gunpoint after he asked to see a warrant before allowing deputies to enter his home. He asked them to show the warrant. They did not. Instead, they searched his home, looking in drawers and cabinets for a full-grown man they claimed to have a warrant for.

The evidence of our plaintiff’s personal stories are supported by hard numbers.

Black individuals make up only 38 percent of Madison County’s population, but they accounted for 77 percent of all arrests made by the MCSD between 2012 and 2017. In addition, the per capita rate of roadblocks in substantially Black census tracts is nearly double that of predominantly white census tracts. 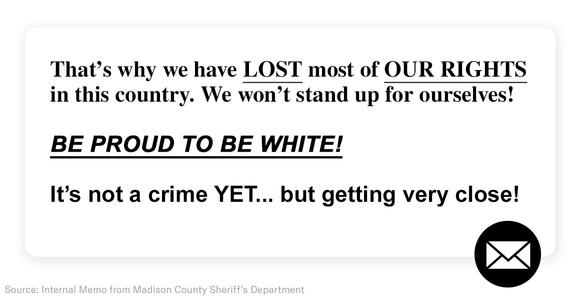 Sadly, our claim of racially biased policing in the county is not new.

MCSD’s racist and discriminatory culture has been felt in communities of color for years. The stories of our plaintiffs and the data analysis support this history of injustice. The eight named plaintiffs in our case against the county are Black men and women ages 28 to 63 who were unconstitutionally searched, detained, or arrested by the MCSD, sometimes violently. These incidents happened while our clients were going about their daily lives — walking to work, driving in their neighborhood, celebrating with family, or just spending time in their own homes.

The ACLU and Simpson Thatcher are asking the court to certify the lawsuit as a class action and put an end to MCSD’s policy and culture of racial discrimination. All residents of Madison County deserve to be treated equally regardless of their race. They deserve justice, and we intend to ensure they get it.

The War on Drugs Failed — Lawmakers Must Meet the Fentanyl Crisis With New...

If You Care About Freedom, You Should Be Asking Why We Don’t Fund Our Public...