And so today, I’ve decided to pursue legal action with the help of the ACLU and NAACP Legal Defense Fund. It’s not right for a school to take taxpayer dollars while singling out and shaming Black natural hair. On behalf of my son and other Black children in my community, I'm urging the Florida Department of Education to hold A Book's Christian Academy accountable. 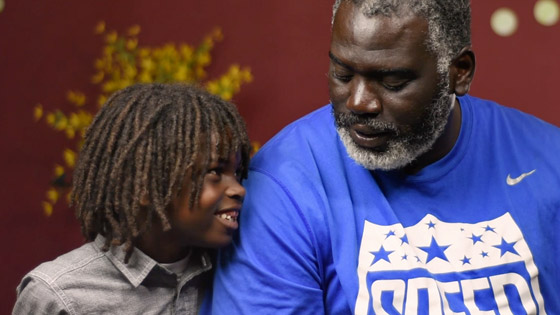 I told CJ that he could start growing locs on the condition that he first learn how to spell. I didn’t make it easy for him. I wrote four columns, 10 words each, on a piece of paper. Four-year-old CJ learned these words in less than a week. It turns out that I'd underestimated this boy's intellect and drive.

But pride turned to embarrassment on August 13, 2018. The day began on an exciting note, as CJ was starting first grade at a new school. His mother and I chose A Book's Christian Academy because it promised smaller classes and more individual attention for our talented son. His mother and I could only afford the hefty tuition with the help of Florida's state scholarship program. Most students rely on the program to attend A Book’s school, which Book himself has described as “95 percent Black.”

CJ stood outside the doorway. He absorbed what it meant to be rejected because he was considered a distraction. It's a piece of innocence that was lost too young.

It broke my heart to tell him that the school had refused even these compromises. Despite what they said, it was clear the problem wasn't the length. They wanted our scholarship money — but they also wanted the power to control, and muffle, a child’s Blackness, the Blackness so visibly expressed by CJ’s kinky hair.

I won’t stand by as schools like A Book's Christian Academy financially benefit from Black student enrollment while showing a disdain for Black students who bring their whole selves to class. There is something terribly wrong with grooming codes that don't respect the cultures of their student bodies. The problem is not my son's hair. The problem is a school policy that doesn’t accept my son, and others like him, for who they are.

Private School Vouchers? Thanks, But No Thanks