It’s been over half a century since the Supreme Court first ruled that public schools cannot impose prayer on students. But in the Webster Parish School District in Louisiana, it might as well be the 1950s because school officials at Lakeside Junior/Senior High School and other district schools start every morning with a prayer delivered over the school’s public-address system. Student “volunteers” may read Bible verses, or they may read the Lord’s Prayer, the text of which is conveniently taped near the microphone.

But the school district’s backward time travel doesn’t end there. School officials are imposing religion at every turn, even though the law has been clear for decades that promotion of religion by public schools is illegal and violates students’ rights under the First Amendment. Nearly every Lakeside school event features an official prayer. Graduation services are held in churches and often resemble religious services.

School officials have implied that students must take the Bible literally and have stated that evolution is a “fairy tale.” The “Daily Objectives,” posted in one teacher’s classroom, tell students to “Pray Daily!,” “Love God!,” “Study His Word,” and “Worship God.” Religious groups and performers, such as the Christian rapper Mynista, have been invited to appear at school assemblies to proselytize students. 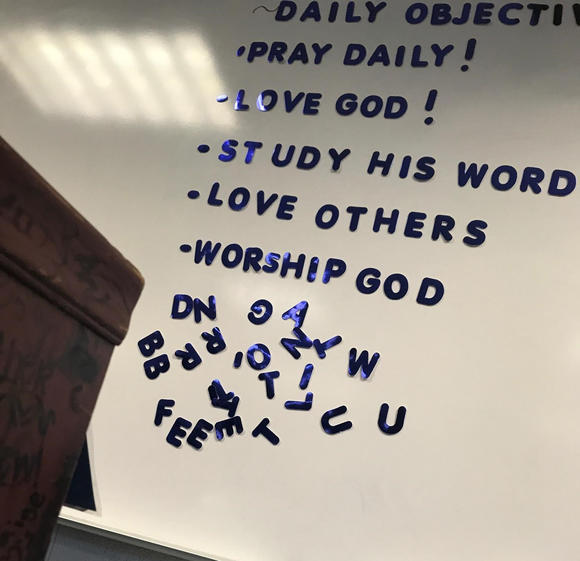 After years of enduring school officials’ unyielding promotion of Christianity, our clients, Christy Cole, and her daughter K.C., a Lakeside student, have had enough. Although Christy is Christian, K.C. is agnostic. And Christy raised K.C. to believe that it is a sin to pray in public. When K.C.’s father confronted Johnny Rowland, who was then the principal at Lakeside and has since been promoted to superintendent of the district, about the blatantly unlawful conduct he issued a challenge: “I’ll stop when someone makes me stop.”

School officials have implied that students  must take the Bible literally and have stated that evolution is a “fairy tale.”

Today, with our help, the Coles accepted Superintendent Rowland’s challenge and filed suit against him, the Webster Parish School Board, and the current Lakeside principal, Denny Finley. We are asking the court to issue an order prohibiting the school district from continuing these unlawful practices. School is not a church, and school officials have no right to impose their faith on students like K.C.

In 2017, our public schools are diverse and welcome students of all faiths and those of none. Welcome to the present and the future, Superintendent Rowland and Webster Parish. The responsibility for the religious education of children, if any, lies with families and faith communities — not with you.

Should Taxpayers Fund Schools Where Students Pledge Allegiance to the...

Paying the Price for Defending Religious Freedom in South Carolina