The Barrow County Sheriff’s Office is holding a “training course” on Thursday apparently approved by the Georgia Association of Chiefs of Police. The title, “Islam in America,” sounds educational and harmless. But the course description and instructor tell another story that raises questions about the goals of law enforcement in Georgia.

The course instructor, David Bores, has a documented history of making inaccurate and dangerous statements regarding Muslims and Islam, claiming that Muslims are not entitled to the same rights as other communities. A retired lieutenant general of the U.S. Army and former law enforcement officer, Bores has conducted several trainings over the years that appear to be in the same vein.

In 2013, he taught “Islamist Ideology: Does it Conflict with our Law Enforcement Mission” at the Dawson County Sheriff’s Office Law Enforcement Center in Nebraska. The course description implied that Muslims are not entitled to the religious liberty that all religious communities are afforded under the Constitution. “[M]any believe we must automatically grant to it [Islam] the rights and privileges offered to other expressions of worship,” the description stated, “lest we be accused of being politically incorrect, of being intolerant of multi-cultural beliefs, or worse, of being labeled Islamophobic.”

More recently, in 2016, Bores presented “The Current Threat of Islamism” to the Atlanta Vietnam Veterans Business Association. This presentation was riddled with misrepresentations of Muslims and Islam, unsubstantiated statistics, and images of non-white men, representing them as “rapists” or violent. One image included a photograph of people with a sign that says, “Rapists Welcome,” in reference to Muslims and refugees. 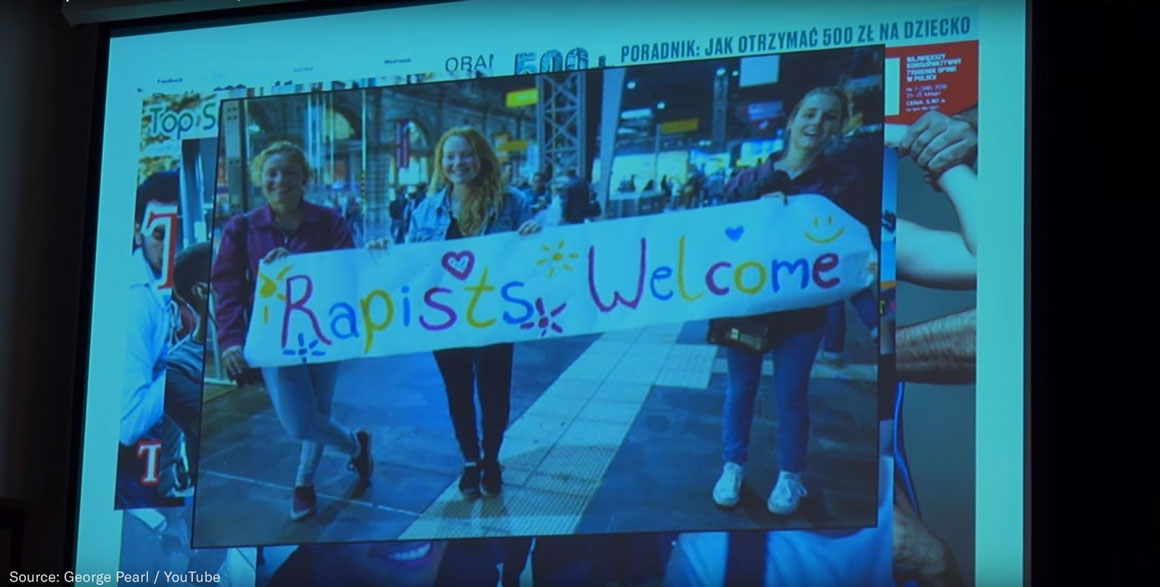 Another photograph, displayed by Bores, showed a woman whose hair and face are covered. “We have no idea who is underneath that,” he said. “We have no idea if they are carrying weapons or bombs. Nothing. It is a security issue. It has no religious significance.” With these words, Bores dismissed the religious beliefs and practices of those who choose to cover themselves in this way as well as the autonomy of women to dress as they choose. Simultaneously, he informed attendees that all Muslims who do make this choice are inherently suspect, dangerous, and violent.

For the Barrow County training this Thursday, Bores appears to go down the same path. The course description includes language that has long been used to create unfounded fear and suspicion of Muslims, such as “jihadist enemy,” “Grand Jihad,” and “Muslim Brotherhood.” It also references “Challenges to LE [Law Enforcement] and the Constitution.” This description likely references Bores’s repeated false claims that Muslims are trying to undermine the Constitution and impose Sharia—Islamic canonical law. Not only is this simply not happening, but the First Amendment already prohibits U.S. courts from imposing Sharia or any other religious law.

Bores clearly comes from a place of bias, making it harmful for him to train law enforcement officers who play an essential role in the safety of our communities. Police officers must operate from a place of objectivity and safety rather than stereotypes and distrust. Not only does the substance of his past courses indicate the inaccuracy of his knowledge, it also reveals his bigotry.

Bores’s influences and associations are also evidence of his anti-Muslim animus. He has aligned himself and his teachings with others who express this bigotry. For example, his 2016 training includes references to the actions of Pamela Gellar, who is well known for her promotion of anti-Muslim policies. He was also an adjunct instructor on “radical Islam” for the Center of Security Policy, an organization with a history of advocating anti-Muslim policies and conspiracy theories.

Local communities and advocacy organizations, including the ACLU of Georgia, are urging the Barrow County sheriff to cancel Bores’s training and the Georgia Association of Chiefs of Police to withdraw its approval. Inaccurate and biased training undermine law enforcement’s duty to serve and protect all communities equally. Sheriffs and chiefs of police have a responsibility to ensure their officers uphold the law and protect communities — rather than teaching them to discriminate against people based upon their faith.

CORRECTION: The article originally stated that the training was on Wednesday, March 7, 2018, when it is on Thursday, March 8, 2018. The text has been corrected.

A Mississippi City Blocked a Proposed Mosque Due to Anti-Muslim Prejudice, We...