On July 1, 2017, former ACLU President Norman Dorsen died due to complications from a stroke. Susan Herman, current president of the ACLU and a former student of Dorsen’s, remembers the impact the man had on her as well as the country’s understanding of what civil liberties and civil rights meant in the latter half of the 20th century.

Norman Dorsen was my role model as constitutional law professor, as ACLU general counsel, and as ACLU president.

I first met Professor Dorsen as a student in his constitutional law class at NYU Law School, where I observed some of his hallmark traits: an exquisite intellect; his keen pursuit of academic excellence (by himself and by his students); his steadfast dedication to civil liberties principles; his capacity to listen to and constructively engage people with different points of view; and his ability to inspire law students to want to take the baton.

When I became a member of the ACLU’s National Board, I saw President Dorsen in action and admired his ability to wrangle a large and often rambunctious group of civil libertarians at board meetings.

And after I was elected president of the ACLU, I got to know Norman, always interested in knowing what was happening at the ACLU these days, always eager to lend avuncular and sometimes uncannily perfect advice on both procedural and substantive issues. 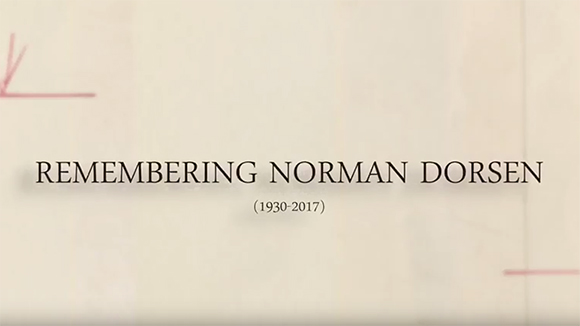 Early in my tenure, I co-wrote an article with Norman — about the ACLU as a federalist organization — and gained insight into his perfectionism as a writer. As we edited what we had written and received new proofs of each current version, I would check to see if our recent round of changes had been made accurately. Norman would reread the entire piece carefully and propose that we make additional refinements, like substituting a semi-colon for a comma here, or revising a phrase for greater clarity there. I lost count of how many rounds of corrections we went through, but Norman never lost his patience or his drive to have every one of his work products be the best it could be.

Over time, I learned that what I saw of Norman was just the tip of the iceberg. I learned that Norman attributed his lifelong passion for civil liberties to his early experience working on the Army-McCarthy hearings, where he observed first-hand the dangerous consequences of demagoguery, unfair process, and repression of speech.

As a prominent constitutional law scholar, Norman persuaded the Supreme Court to extend due process protections to juvenile proceedings (In re Gault, 1967) and to recognize equal protection rights for non-marital children (Levy v. Louisiana, 1968). After becoming ACLU general counsel, he successfully argued the first abortion case to reach the Supreme Court (In re Vuitch, 1971).

Unlike many brilliant individuals, Norman was also a devoted institution builder. In 1961, he founded NYU’s Arthur Garfield Hays Civil Liberties program, named for the ACLU’s esteemed co-founder and first general counsel. He directed and later co-directed that program for over 50 years, training and mentoring generations of civil liberties lawyers. Turning to the frontier of international human rights in his post-ACLU days, Norman led the Lawyers’ Committee for Human Rights and the U.S. Association of Constitutional Law. In 1995, he became founding director of the Hauser Global Law School program at NYU, one of the first programs of its kind.

In 1972, Norman offered a challenge grant that resulted in the formation of the Society of American Law Teachers (SALT), an association of law professors dedicated to promoting justice, equality, and academic freedom. Norman not only founded SALT but became its first president and continued to help steer the organization for many years.

Norman attributed his lifelong passion for civil liberties to his early experience working on the Army-McCarthy hearings.

And of course, there was the ACLU, where Norman served as general counsel from 1969-76 and as president from 1976-91. Under his leadership, the ACLU expanded its mission to include not only traditional issues of due process and free speech, but reproductive freedom, immigrants’ rights, and LGBT rights. Norman’s talents were key not only to the ACLU’s growth but to its very survival.

Norman Dorsen was president in 1977 when a young ACLU of Illinois lawyer, David Goldberger, represented Nazis challenging a town ordinance prohibiting them from marching in Skokie, a town whose residents included a number of Holocaust survivors. Norman staunchly supported this lawsuit. Responding to those who wanted to make an exception to free speech principles because this form of speech was so hateful, Norman said, “If we don’t belong in Skokie I don’t know where we belong.” And when the ACLU was rocked by the backlash against Skokie, Norman showed what reporter J. Anthony Lukas later described as a “magic touch for healing organizational wounds,” helping to put the organization back on course.

It is telling that the entities Norman built all honored his contributions highly. NYU Law School named a chair after him. The Norman Dorsen Civil Liberties Professorship is currently held by former ACLU Legal Director Burt Neuborne. SALT, still going strong, established a Norman Dorsen Fellowship. In 2007, the Association of American Law Schools gave Norman its Award for Lifetime Contributions to Legal Education. President Bill Clinton, on behalf of the country, conferred the Eleanor Roosevelt Human Rights Award on Norman in 2000.

And at the ACLU, we now confer a biennial Norman Dorsen Presidential Prize upon an academic who, like Norman, has made lifetime contributions to civil liberties. The first Dorsen Prize, in 2013, was awarded to David Cole, now the ACLU’s legal director. The 2015 Dorsen Prize went to Michelle Alexander, former ACLU lawyer, academic, and author of the galvanizing book, “The New Jim Crow.”

The last ACLU meeting Norman Dorsen attended, in May of this year, was as a member of the committee selecting this year’s award winners. I think it is uniquely fitting that the 2017 Norman Dorsen Prize, to be awarded at our Biennial Leadership Conference in September, will go to David Goldberger who, after his time at the ACLU of Illinois, has spent his career at Ohio State University teaching and writing about the First Amendment. David was Norman’s partner in meeting the challenges of Skokie and sent out a justifiably famous letter helping to rebuild the ACLU by eloquently explaining to the public why defending even the speech we hate is the right and principled thing to do.

The award ceremony will also be our occasion to commemorate Norman Dorsen himself. At a time when freedom of speech and so many of our other values are once again under assault, and at future times when new challenges appear, remembering Norman’s life and legacy will help us rise to those challenges.

Norman’s death, on July 1, 2017, was cushioned by his loving family and friends, especially his extraordinary daughters, Caroline, Annie, and Jennifer and his brother David. I know the entire ACLU family joins me in expressing our condolences to the Dorsen family. We also have lost someone very special to us.

Norman, we will miss you, but your life’s work continues. You will not be forgotten.