The Kentucky legislature had hardly been gaveled into session on January 3 when lawmakers rushed to pass the latest offensive abortion restriction into law. HB 2 forces doctors to describe an ultrasound to a women seeking an abortion in detail, even if she objects, even if the doctor believes that forcing the description on the woman would be harmful, and—most absurdly—even if the woman is covering her eyes and ears.

Lawmakers then took the extraordinary step of attaching an emergency clause to have the law take effect immediately. Just days after this insulting bill was introduced, Gov. Matt Bevin signed it into law.

That very day, the ACLU filed a lawsuit to block it from taking effect. The law unconstitutionally comes between a woman and her doctor by requiring that a doctor recite a state-mandated speech while providing an ultrasound — even if the woman is closing her eyes or asking the doctor to stop. It also violates medical ethics by forcing doctors to subject women to a medical procedure without their consent.

Shockingly, the law mandates that doctors put the ultrasound screen in a woman’s face and deliver the state’s antiabortion message even if the doctor thinks this will have a traumatic effect on the patient’s mental health.  As expert medical testimony in the case makes clear, this experience would be incredibly harmful to many women, including women who became pregnant as a result of rape or incest, among others.

On the facts, it’s not immediately clear which is more outrageous: The legislators’  attempt to shame women for exercising their constitutional rights or their claim that they are doing so to “protect the welfare” of the women they are forcing these unwanted procedures on. What is clear is that the American College of Obstetricians and Gynecologists and the American Medical Association both oppose mandated ultrasound laws and say that they serve no medical purpose.

HB 2 is at once both typical of the more than 340 state laws restricting abortion that have been passed since 2010 and a stark warning of things to come. While it is nearly identical to a North Carolina law that the ACLU had struck down in 2014, its “emergency” consideration at the top of the agenda of Kentucky’s new legislature likely signals an escalation of the assault on the right to abortion.

Gov. Matt Bevin fired back in response to the ACLU’s lawsuit. “They sue often," he said, "They try to find resolution for everything they don't like in the courts.”

So when Kentucky passes legislation that curbs a woman’s constitutionally protected right to make decisions about their lives, their health, and their bodies, then yes Gov. Bevin, you can expect to see us in court.

It seems to me that the people of Kentucky want a woman's right to an abortion to be stopped or they would not elect politicians who vote these laws.

The politicians who vote for these laws were not elected by everyone in the state. And those people who elected may not agree with everything the polititicans want to do.

Obviously the people trying to get abortions and the ones administering them don't agree with these politicians' views, and that's all that matters- it doesn't matter what the rest of Kentucky thinks because a woman's body is nobody's business but her own

Pregnancy is a medical condition that can risk a woman's life. Medical decisions are between a doctor and his or her patient. No one would think twice into shaming a patient into tumor removal.

ACLU arguments against mandatory ultrasound need to go to the sonochemistry science. Ultrasound causes countless chemical reactions which otherwise would not occur. There have been no long-term studies of how it affects the longevity of the "unborn" who are subjected to it.

I am a citizen of the Great Commonwealth of Kentucky. I fully support the decisions our honorable legislators and Governor Bevin have made thus far and many of the other measures forthcoming. We (that is the majority) voted for change both in our state and federal governments because we are tired of all the liberalism in this country. The ACLU is nothing more than a vehicle to push for the increase of the immoral and insane ideals of liberal America. They shout civil liberty for all while at the same time they stifle the rights of conservatives, particularly the Christian people. They treat us, and I include myself in this category, as though we are "deplorable" and "uneducated". In fact they will probably delete this comment because it expresses an idea they disagree with. Or perhaps they will take me to court and sue like they want to do to my state. How's that for freedom of speech? This country is ready for a conservative revolution to dismantle years of liberal policies that threaten the fabric of this nation. Kentucky is just the beginning and I for one look forward to the new federal regime which will begin in a few days. It's time to get this country back on the right track morally, financially, ethically, and spiritually. It's time to Make America Great Again and I applaude once again the fine lawmakers in Kentucky for the steps they have taken in getting this process started.

I am also from Kentucky. Your rights are NOT and have NEVER been stifled. You do not have to have an abortion if you don't want one. The only thing you have been prevented from doing is forcing your beliefs on someone else. You should not be allowed to vote on my right, the right my daughter and the right of all of the women of Kentucky to choose the medical care that they deem most appropriate. Your punitive and authoritarian ideas run counter to the loving message of Christ and to patriotic ideals of this country.

THANK YOU for fighting for women! I will continue to donate to support the ACLU and urge everyone else to do the same! They are fighting for us at a time when we so desperately need champions to defend reproductive choice. 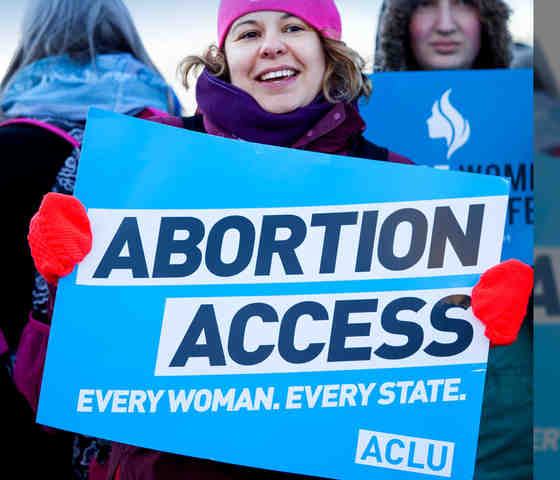