The War on Marijuana is a Failure

By The Gregory Brothers
Tags

On April 19th, a date suspiciously (and auspiciously) close to April 20th, The New York Times published our Op-Doc "The War on Drugs is a Failure." 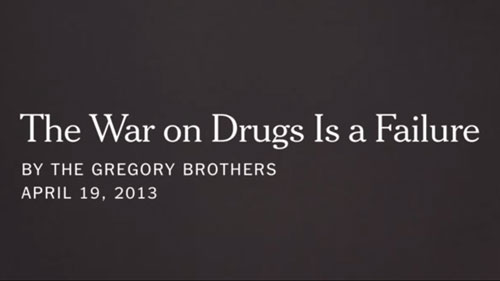 In writing about what motivated us to create this video, we commented that "the unjust rates of incarceration among blacks, Hispanics and the poor highlight why the war we have been fighting for decades should itself be considered illegal."

Over the last twenty years, much of the war of drugs has become a war on marijuana. According to new research from the ACLU, nearly half of all drug arrests in 2010 were for marijuana possession - with cops busting someone every 41 seconds just for having weed. And the bulk of those arrested were Black. Despite the fact that Blacks and whites use pot at roughly the same rates, the ACLU found that Blacks were nearly 4 times as likely to be busted for having marijuana. The expense is staggering: states are wasting about $3.6 billion a year enforcing marijuana laws - money that could be better invested.

If someone is arrested for having weed, they could lose money, time, their job, their immigration status, public benefits, or student aid.

It's not right. It's not making us any safer. It's time to declare the War on Marijuana a failure.

Click here for more on the ACLU's new report The War on Marijuana in Black and White: Billions of Dollars Wasted on Racially Biased Arrests.

Check out more from The Gregory Brothers here.

It/s been going on for decades and has allowed the police to trample on Constitutional rights. It's time to decriminalize and allow people to use it without arrest.

What's with the spam filter that won't allow real people to comment?

Governors Can Succeed in Criminal Justice Reform Where Legislatures Fail

Can You Think of a Better Way to Spend $7.2 Billion Than Unnecessarily...