For-Profit Companies Are Helping to Put People In Jail for Being Poor. I Should Know, I Was One of Them.

In December, I was jailed for five days simply because I couldn't afford to pay $838 in traffic fines and fees to DeKalb County and a private probation company called Judicial Correction Services, Inc.

It sounds unbelievable, but that's exactly what happened.

Last summer, I got a traffic ticket just after I pulled my car out of the driveway of my home in Decatur, Georgia. I had no idea that this ticket would eventually land me in the DeKalb County Jail for being poor.

That day, I also didn't know that my driver's license had been suspended. I later learned that it had been suspended because I forgot to submit a form to the Georgia Department of Driver Services after resolving charges related to a minor traffic violation (I missed a "no left turn" sign and appeared late to my court hearing). 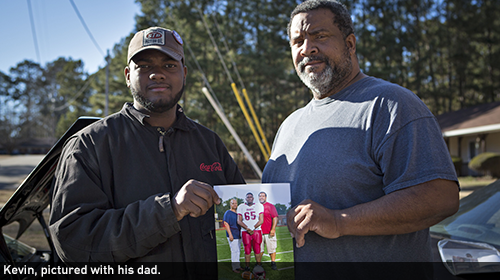 In October, the DeKalb County Recorders Court ordered me to pay $810 in fines related to the ticket. When I told the judge that I could not afford to pay $810 that day, she put me on "probation" with Judicial Correction Services (JCS) and told me that I had 30 days to pay. Like other people who couldn't afford to pay fines on sentencing day, I was on "pay-only" probation. My driver's license was also suspended for another six months.

I did everything I could to pay my court fines and the fees JCS charged me for "probation." Because my license was suspended, I could no longer earn money through paid tow truck driving training, which I had done before. I did odd jobs for an auto shop while looking for work and borrowed money from my mom, sister, and grandmother to pay what I could.

But it wasn't enough.

When my 30 days were almost up, I went to see my JCS officer. She charged me with violating probation for failure to pay court fines and JCS fees. She also failed to tell me that I had a right to request a court-appointed lawyer at my probation revocation hearing. Instead, she said I would have to pay $150 for a public defender, even though the fee is $50 and can be waived for poor people. I didn't have the money to pay, so I didn't request a lawyer.

I dressed in slacks and a dress shirt that I borrowed from my dad, since I didn't have my own, and I went to court with my mother for my probation revocation hearing. I hoped the judge might give me an extension of time to pay or community service because I was trying my best to pay. Instead, the judge immediately asked to hear from the JCS officer next to her, who recommended sentencing me to 10 days in jail if I couldn't pay my balance that day. I begged the judge to help me get a permit so that I could drive for work and to give me some more time to pay. Instead she sentenced me to nine days in jail.

I was stunned. I couldn't believe what happened.

All of a sudden, I realized that my mom was going to see me put in handcuffs and taken to jail. I could feel tears welling up in my eyes. I asked the judge if I could hug my mom. The judge said no. As I was handcuffed and taken to a cage behind the courtroom, I began to cry.

I spent five days in the DeKalb County Jail where it was cold and dirty, and I didn't get enough food. I felt ashamed, scared, and sad during those five days. It hurt to be separated from my family. And even after I was released, I felt scared that police might arrest me and jail me again for no good reason. After all DeKalb County and JCS essentially jailed me for being poor.

What happened to me – and others like me who try their best to pay fines and fees but fall short – is unfair and wrong, but I am standing up for my rights. The Constitution prohibits local governments and for-profit companies from doing what they did to me. I hope this lawsuit will help prevent other people from being jailed just because they are poor.

Kevin Thomson is a plaintiff in Thompson v. DeKalb County.