As early as tomorrow, the long-awaited Senate torture report will finally see the light of day. If all goes as planned, the Senate Intelligence Committee will release the roughly 500-page executive summary of its 6,000-page report concerning the CIA's "rendition, detention, and interrogation" program. The report is said to be highly critical of the program.

Former President Bush came out over the weekend to defend the CIA against the report's conclusions. That's not surprising, considering his own responsibility for the CIA's brutal policies.

Despite attempts to keep the program secret, details of it came out, bit by bit, in documents released over the years. Some, but not all, of the most shocking documents – including the memos comprising the legal infrastructure of the program – are listed below. Hopefully by tomorrow, the story they tell will be more complete.

One of those memos twisted the definition of torture, concluding that in order to violate the law prohibiting torture, the resulting pain "must be equivalent in intensity to the pain accompanying serious physical injury, such as organ failure, impairment of bodily function, or even death." It also concluded that prosecution under the law might be barred as an infringement on the president's war authority.

The other memo approved the CIA's use of torture techniques including waterboarding, cramped confinement, and sleep deprivation on Abu Zubaydah who was being held at a secret prison in Thailand. He would eventually be waterboarded 83 times.

Revelations of torture at Guantanamo Bay

In 2005, TIME magazine published a previously secret interrogation log describing brutal 20-hour interrogation sessions of Mohammed al-Qahtani at Guantánamo from November 23, 2002, to January 11, 2003. On December 2, 2002, Secretary of Defense Donald Rumsfeld approved the application of harsher interrogation techniques on Mr. al-Qahtani. Among other things, the log describes sleep deprivation, forced shaving, use of the "Invasion of Space by a Female" technique, and in one incident, interrogators forcing Mr. al-Qahtani to bark like a dog.

Rumsfeld okays the use of torture at Guantanamo

In this memo from 2002, Rumsfeld authorized the military to use harsh interrogation techniques including stress positions, nudity, forced grooming, use of phobias, pushing, and grabbing. He famously added a note next to his signature:

At the time, Navy General Counsel Alberto Mora raised concerns that some of the methods authorized in the memo could rise to the level of torture. Mora later documented his persistent attempts to get the Defense Department to change course in a 22-page memo written in July 2004.

Yoo backs use of torture by military interrogators

A 2003 memo, written by Justice Department attorney John Yoo, gave the Defense Department expansive authority to torture and abuse detainees. It was premised on the same flawed analysis that Yoo had adopted in the 2002 memos provided to the CIA.

In May 2004, CIA Inspector General John Helgerson issued a report of his internal investigation of possible illegal conduct in the CIA's secret prisons. The report detailed the use of torture techniques that were never authorized by the Justice Department, including mock executions, "racking" a gun near a detainee's head, revving a power drill while a detainee stood naked and hooded, and forcing detainees to inhale smoke until they vomited. The report also revealed that the CIA waterboarded Abu Zubaydah 83 times and Khalid Sheikh Mohammed 183 times. The report was released to the public in redacted form in 2009 as a result of the ACLU's FOIA lawsuit. 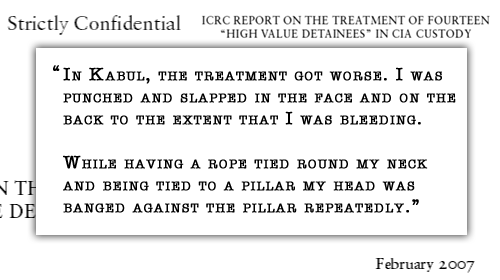 In a series of emails released in an ACLU FOIA, FBI agents detailed the abuses they witnessed at Guantanamo Bay. In the most notorious of these, from August 2004, an FBI agent described detainees chained to the floor and left without water or food for 24 hours or more, who had urinated or defecated on themselves. One detainee was described as:

…almost unconscious on the floor, with a pile of hair next to him. He had apparently been literally pulling his own hair out throughout the night.

In December 2004, the CIA provided a backgrounder to the Justice Department to use in drafting more legal memos authorizing torture. It describes step-by-step how the CIA carried out unlawful extraordinary renditions and interrogations. It also demonstrates that the CIA routinely applied a rapidly accelerating set of harsh interrogation techniques, including nudity, sleep deprivation, dietary manipulation, slaps, facial holds, and attention grasps to nearly every "high-value" detainees. Finally, it details other interrogations techniques in their arsenal including walling, water dousing, the use of stress positions, wall standing and cramped confinement. The "day-to-day look" at a sample interrogation starting on page 9 is particularly chilling.

On May 10, 2005, Justice Department attorney Steven Bradbury concluded in a pair of memos that the use of each of the methods described in the CIA's backgrounder – including waterboarding– did not violate the law against torture when used individually or in combination. He followed that up on May 30, 2005, with a legal opinion concluding that the CIA's program also did not violate the prohibition on cruel, inhuman or degrading treatment or punishment.

On September 6, 2006, the Bush administration announced that 14 so-called "high-value" detainees had been transferred from CIA detention to Guantánamo Bay. That was the first public acknowledgment that the CIA's secret detention program existed.

In October 2006, the International Committee of the Red Cross obtained access to the men for the first time. The ICRC's confidential report to the CIA was leaked and published by the New York Review of Books in 2009. The report contains detailed descriptions of abuses meted out by the CIA and concludes that the interrogation techniques and treatment the men were subjected to "singly or in combination . . . amounted to torture and/or cruel, inhuman or degrading treatment."