Americans Endorsed Voting Rights in 2018, but Some State Lawmakers Want to Sabotage These Victories

The 2018 election ushered in a wave of voting rights victories. Voters in Florida, Michigan, Maryland, and Nevada all made it easier to register and vote, showing that voters reject voter suppression efforts and bogus “voter fraud” myths. But politicians in several states are now trying to undercut these hard-fought wins.

Last month, Michigan voters passed a voter modernization package, Proposal 3, by a massive 67-33 percent margin. Proposal 3, championed by the Promote the Vote MI coalition and backed by the ACLU of Michigan, helped expand access to the ballot by enacting no-excuse absentee voting, automatic voter registration, and same-day voter registration for the two-week period prior to an election, including Election Day.

But some state lawmakers in Michigan want to undermine the voters’ clear choice during the lame duck session. There, politicians are trying to pass legislation restricting access to same-day voter registration in the final 14 days prior to an election before a voting-rights supporter is sworn in as governor.

They are not alone, as lawmakers in Wisconsin want to curtail the early voting period in their state and reduce the powers of newly elected state officials, and North Carolina legislators are using the lame duck session to add new barriers to the ballot box. In November, Florida voters approved a state constitutional amendment to restore voting eligibility to people with prior felony convictions with nearly two-thirds of the vote. But politicians are trying to slow-walk issuing guidance to county election supervisors on registering people with prior felony convictions to vote.

In Georgia, Secretary of State Brian Kemp used a wave of practices to make it harder for voters to retain their rights and access the ballot box, misusing his office to suppress the vote in the hotly contested gubernatorial contest, where he was the Republican nominee. In response, the new leadership of the U.S. House announced that they plan to look into voter disenfranchisement in Georgia and other states as part of a restored subcommittee on elections. 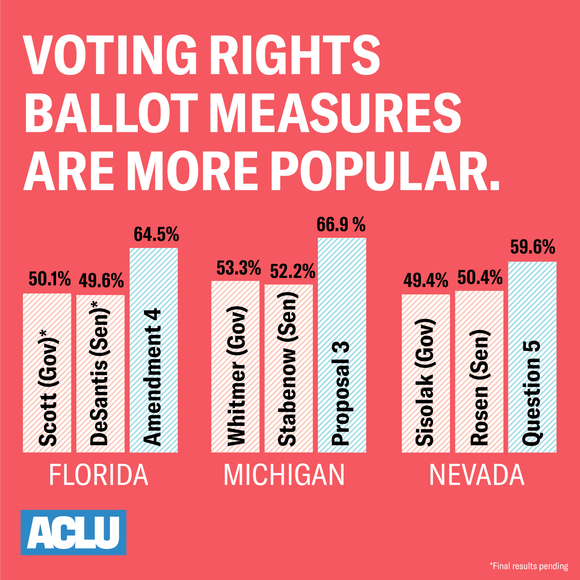 In Florida, Michigan, and Nevada, the votes cast in support of voting rights measures were larger than the vote totals for any one candidate for governor.

Yet despite these attempts to thwart the will of voters, there were other voting rights victories that didn’t receive the attention they deserve.

In Arizona, which had one of the most hotly contested secretary of state races in the country, a candidate who campaigned on taking voter suppression into overdrive, Steve Gaynor, went down in defeat. Gaynor said he opposed the printing of ballots and election materials in languages other than English, a direct attack on protections covered by the Voting Rights Act. If his agenda went into effect, close to one million voters in Arizona would be affected. But voters rejected Gaynor’s attacks on the right to vote and instead elected his opponent Katie Hobbs, who vocally opposed new voting restrictions, to the office.

Voters also showed that they are not willing to put up with politicians’ partisan gerrymandering schemes, which make elections less competitive and carve up communities into misshapen districts. While redistricting is a necessary process to make sure that members of Congress and state legislatures represent districts with proportional populations, oftentimes politicians use the process to make elections safer for incumbents or members of certain parties.

In Utah, voters passed the Better Boundaries initiative, a crucial victory by a bipartisan coalition who urged that redistricting be the responsibility of an independent commission rather than partisan politicians. The success of this effort in a traditionally conservative state shows that voting rights measures can find support among Americans of all political persuasions, and Utahns weren’t the only ones to approve redistricting reform this year.

And to top it all off, the country’s most prominent voter suppression crusader, Kris Kobach, was defeated in his campaign for governor of Kansas.

These voting rights victories should be a reminder to politicians that they need to listen to their own voters who want their right to the ballot protected, not diminished. As Kemp’s opponent Stacey Abrams said following the election, Americans must commit to defending the principle of free and fair elections even in the face of voter suppression because “the antidote to injustice is progress.”

At the Polls, Episode 6: Your Voting Questions, Answered

At the Polls, Episode 5: Why is Voting so Inaccessible to People with...