Since the last presidential election, states around the country have been trying to suppress voting. But the ACLU, along with our affiliates and partners across the country, have been hard at work defending your right to vote. Over the last four years, we have won 15 victories in 12 states that will safeguard the voting rights of millions of Americans this November.

Together these rulings directly affect more than 5.6 million voters in 12 states that collectively are home to 161 members of the House of Representatives and wield 185 votes in the Electoral College.

But we are not done yet. The ACLU will be doing everything we can to protect your right to vote in the days leading up to Election Day and on Election Day itself. And we’ll be back at work the next morning, preparing for the next election.

The Supreme Court is delusional if they think someone who has violated the law to cross the border and probably has stolen someone's identity to get a job is going to be honest when asked if they are a citizen of this country. These people are criminals and patently dishonest.

I think the delusion here is that people who cross the border illegally are going to show up at polling places to vote in American elections. If you've met some of these people or put yourself in their place you'd realize that the last thing they want is contact with government organizations.

The real crime here is that, in the name of protection against a few hypothetical illegitimate voters, Republican legislators are disenfranchising tens or hundreds of thousands of people (millions nationwide) who everyone knows are perfectly legitimate voters but belong to groups or live in neighborhoods where the majority of voters vote Democratic. This is election fraud on a massive scale.

It's just as delusional to think that someone who has violated the law, and is living under a false identity is going to waltz in to a government office to illegally cast a vote that will be counted in an electoral college.

Dont be fooled. The Aclu doesnt support Voter ID laws because they know that there really is voter fraud and that those committing it support liberal candidates.

Your conspiracy theories have no factual basis. Go troll somewhere that people actually don't think and reason because you are wasting your keystrokes here.

Did the ACLUbring the lawsuit in Michigan that stopped the deletion of straight party voting? I know that it is an option on the ballot this election (you fill in one oval and select everyone in say the Dems). I am trying to find out who helped with this.

Thank you to the ACLU for all you do fo we the people.

For several years now I have been the Minority Inspector at a township polling place. I have been concerned about the possibilities for corruption through sold votes possibly enabled by modern technology.

In days gone by the voter could go out of the booth and show proof as to which candidate he/she voted for and receive money, booze, whatever. Now one can just take a picture of one's completed ballot and show it as proof for drugs, etc.

I recently read that the ACLU was defending the right to take these pictures! How can this be?

This is why I support the ACLU they are encouraging the vote. They are the ones supporting Democracy. As far as those other comments too scared to put their names... get your heads out of the sand, it's OK. 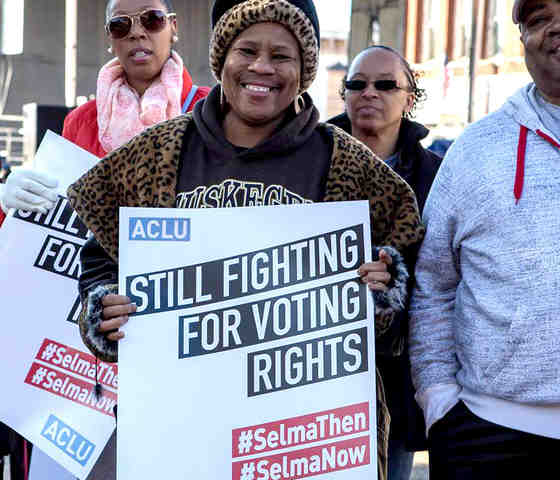