Ohio’s Voter Purge Goes to the Supreme Court: What You Need to Know

In November 2015, Larry Harmon went to vote on a ballot initiative, only to find that his name was not on the list at his usual polling location.

He had been purged. The reason? Larry had chosen not to vote in 2012, as he didn’t support either candidate and, he noted, “there isn’t a box on the ballot that says ‘none of the above.’” Larry also did not participate in the 2010 and 2014 midterm elections.

The right to vote includes the right to decide whether, when, and how to exercise that right. Yet Ohio has adopted a “use it or lose it” policy that violated Larry’s right to choose when to vote, and has disenfranchised thousands of registered, eligible Ohioans.

In April 2016, the ACLU of Ohio and Demos challenged Ohio’s purge process for violating the 1993 National Voter Registration Act, which prohibits removing voters from the rolls solely because they did not vote in an election. We succeeded in blocking the purge for the November 2016 election — a move that allowed more than 7,500 voters who would have been purged to vote by provisional ballot in the presidential election.

Now we are headed to the Supreme Court to defend our victory. The Supreme Court should send a message to Ohio and states across the country that it is unconstitutional to kick voters off the rolls simply for not voting. 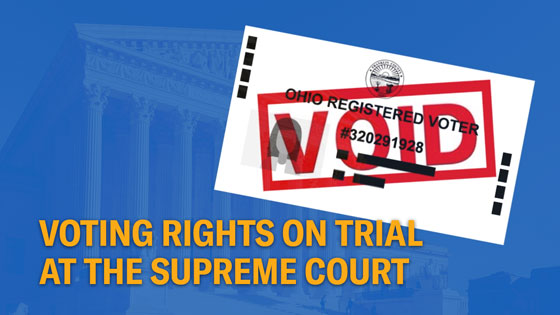 How does Ohio decide whom to purge?

Under Ohio’s purge rules, registered voters who do not participate in an election in a two-year period are sent a postcard, requesting them to confirm their address. If the voter doesn’t respond or vote in the next two consecutive federal general elections, they’re kicked off the rolls without further notice.

Voting in the United States is not a “use it or lose it” right. Ohio’s practice violates the National Voter Registration Act — sometimes called the Motor Voter law — which expressly prohibits removing voters solely because they did not vote in an election or return a piece of mail.

Who is most impacted?

A Reuters analysis concluded that Ohio’s purge program disproportionately affected voters of color, particularly Black voters. Since Ohio focuses on purging people who vote infrequently, it may be because voters of color or low-income voters, in particular, generally have lower turnout.

We believe, though, that you shouldn’t be disenfranchised just because you vote less frequently than your neighbors.

If the Supreme Court rules that states like Ohio can just kick people off the rolls for not voting, then the voting rights of millions of Americans could be at risk.