On Wednesday, the ACLU will be in the Supreme Court, defending a victory that preserved the voting rights of thousands of Ohio voters in the 2016 election.

Along with Dēmos and the ACLU of Ohio, we represent the Ohio A. Philip Randolph Institute, the Northeast Ohio Coalition for the Homeless, and Larry Harmon, an Ohio voter. Together, we’ve challenged a voter purge process in Ohio, under which registered voters who do not vote during a two-year period are targeted for removal from the rolls. Here’s how it works: If you don’t vote for two years, Ohio sends you a nondescript notice in the mail, and if you don’t return it or vote in the next two federal elections cycles, they kick you off the rolls. With respect to your right to vote, Ohio is essentially saying, “Use it or lose it.”

Ohio says this purge process is necessary to keep its voter rolls accurate and up-to-date. In Ohio, as in many states, if you move out of your county, you become ineligible to vote and must re-register. Ohio keeps track of many voters who move by checking with the Postal Service, something many states do. But Ohio does something else that only a handful of states do: The state assumes that a person who has not voted in two years may have moved across county lines and might need to be removed from the voter rolls.

That’s a pretty bizarre assumption. According to Census Bureau data, only about 3 percent of people in Ohio move across county lines each year. But more than half of Ohio voters typically do not vote in a federal midterm election. And when Ohio sends out mailings to voters asking them to confirm whether or not they’ve moved, about 80 percent of those who are sent these mailings never respond to them. It just can’t be the case that all of these people have moved. The inevitable result is that Ohio erroneously purges voters who haven’t moved, who remain eligible to vote, but who may end up being disenfranchised.

Over the years, thousands of Ohio voters showed up to the polls, only to learn that they had been purged when it was already too late, as the state requires voters to register at least 30 days before the election. That’s also exactly what happened to our client Larry Harmon during the 2015 Ohio state elections. 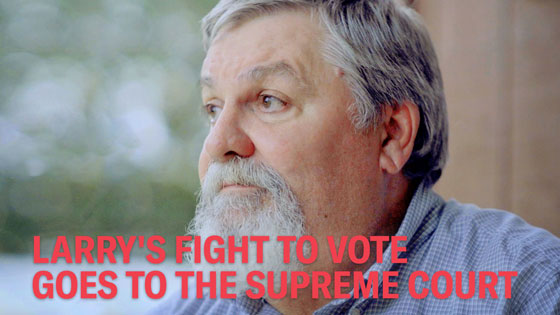 There is every reason to believe that these purges disproportionately affect low-income voters and voters of color, who tend to have lower-than-average turnout rates. And, in fact, a Reuters analysis last year found that, in Ohio’s five largest counties, residents of predominantly African-American neighborhoods were about twice as likely to be purged as were residents of predominantly white neighborhoods.

Federal law prohibits purging voters just because they don’t vote. One of the guiding principles of the National Voter Registration Act of 1993 (NVRA) is that, once a voter becomes registered, she can’t be removed from the rolls unless she becomes ineligible to vote. States aren’t supposed to be able to kick people off of the rolls for not voting or for not responding to a piece of mail. These kinds of purges were common before the NVRA was passed, with voters often learning that they had been purged after they arrived at the polls.

For decades, the Department of Justice, which enforces the NVRA, in both Republican and Democratic administrations, maintained that these kinds of purges are illegal. The department has enforced this rule repeatedly, compelling states and counties like Alaska, South Dakota, and Cibola County, New Mexico, to refrain from purging voters using a process like Ohio’s. And in the run-up to the 2016 election, the department filed a brief in this case, arguing that Ohio’s purge process violates federal law.

But a lot has changed since the 2016 election. Under Trump, the Justice Department has now flipped sides in this case, switching from arguing that Ohio’s purge is illegal to saying that it’s perfectly acceptable to target voters for removal from the rolls if they don’t vote in a two year period. On Wednesday, the Justice Department will be arguing in support of Ohio before the Supreme Court.

It’s just another example of the Trump administration trying to turn the clock back by reversing course on a civil rights issue. This pattern includes the Justice Department’s flip-flop on the Texas voter ID law in July (which was struck down after the department sued the state in 2013, but which the department now says is lawful) and its sweeping request to look into the practices of more than 40 states in maintaining voter lists. All of this suggests that the Justice Department under Trump is shifting away from its historic mission of protecting voters to paving the way for states to adopt restrictive voting laws and practices.

In this case, the Court of Appeals for the Sixth Circuit ruled that the Ohio purge procedure violated the federal law. That decision allowed more than 7,500 voters who had been purged to have their ballots counted in the 2016 election. Remarkably, Ohio does not argue that any of these voters had moved or were otherwise ineligible — the state simply wanted to reserve the right not to count their ballots. In fact, Ohio has at times seemed to make light of that 7,500 figure, suggesting that a purge can’t be a big deal if only a few thousand voters are affected.

We disagree. There’s no justification for tossing the ballot of a single eligible voter. Every vote should be counted because each and every American’s right to vote is sacred. That’s the basic principle at stake on Wednesday.

100 Years and Counting: The Fight for Women’s Suffrage Continues

Amendment 4 is Back in Court as Florida Fights Our Victory Over its Modern...

What the Caucuses Taught me About Inequities in our Electoral System