Ferguson, Missouri, has a long and ugly history of racial discrimination. Like many communities across the United States, a history of state-sanctioned housing discrimination has led Ferguson to be highly segregated by race. And the Ferguson-Florissant School District, in fact, was created in the 1970s as part of a federal order in the face of resistance to school desegregation during the 1970s. (Yes, this was two decades after Brown v. Board of Education.)

But discrimination doesn’t disappear overnight. While 80 percent of students in the school district are Black, there were zero Black school board members as recently as 2014. Today just two out of seven board members are Black.

The underrepresentation of the Black community in shaping the way the district is governed is undemocratic and has had real consequences for students.The board has taken no efforts to address a wide racial achievement gap in the district, and it has permitted severe racial disparities in school discipline to persist. Black students are suspended and referred to the police more often than white students, and, in recent years, have been the only students subjected to corporal punishment, which the school district was still practicing as recently as 2011.

The reason for this lack of representation is the school district’s at-large method for electing members of its school board, which deprives its Black residents of an equal opportunity to elect representatives of their choice in violation of the federal Voting Rights Act. The current school board lacks not only racial diversity but geographic diversity as well: All seven current board members hail from just two of the 11 municipalities that make up the school district.

That is why the ACLU is representing Black residents of Ferguson and the Missouri NAACP in court this week. Our clients are fighting for an electoral system that requires each board member to be elected from a different area of the school district, so that the citizens of each and every community in the school district have an equal chance to elect a candidate of their choice.

Watch the video below for more information, and for more on the case go here. 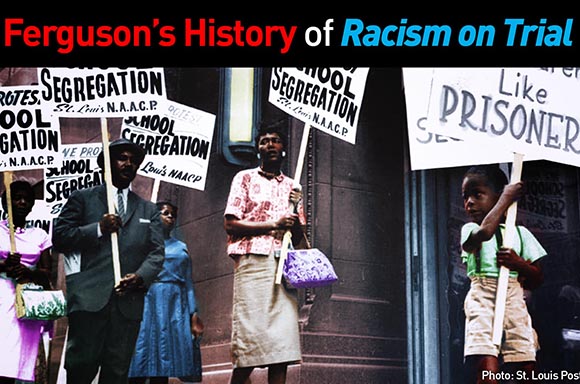 If the Biden Administration Is Serious About Protecting Voting Rights, Here's...