Last month, we challenged the Trump administration’s decision to add a citizenship question to the 2020 Census — essentially a door-to-door federal inquiry of the citizenship status of every member of every household in the country. On Thursday, we received welcome news from a federal judge that the lawsuit can continue. The judge’s decision, in part, was based on an explosive set of documents we obtained from the government. These documents reveal that the Trump administration’s public explanation as to why it needs this information is a sham to conceal its discriminatory, anti-immigrant agenda, and they also prove that a prominent member of President Trump’s cabinet lied under sworn oath to Congress.

Some background: Every 10 years, the federal government conducts a census to count all people in the United States. Everyone is counted without exception — adults and children, citizens and non-citizens alike. This total population count is used to allocate funding for various federal programs and to apportion representation in Congress, the Electoral College, and within state legislatures.

Earlier this year, the Trump administration announced that it will include a citizenship question in the census questionnaire being sent to every household in America for the first time in 70 years. The White House persists, despite unanimous opposition from experts warning that such a question will intimidate immigrants and deter participation in the census in communities of color, costing these communities critical resources and political representation.

Documents uncovered in our case have revealed that attacking immigrant communities is, in fact, the administration’s goal, spearheaded by two of President Trump’s most prominent anti-immigrant ideologues, and that Commerce Secretary Wilbur Ross lied to Congress in an attempt to cover up this fact.

Here’s the official story, according to the Trump administration, of how a citizenship question came to be added to the census, in three parts.

First, on December 12, 2017, Arthur Gary, a Trump appointee in the Department of Justice, wrote a letter to the acting head of the Census Bureau, Ron Jarmin, requesting that a question on citizenship be included in the 2020 Decennial Census. The ostensible reason was that such information “is critical to the Department’s enforcement of Section 2 of the Voting Rights Act and its important protections against racial discrimination in voting.” 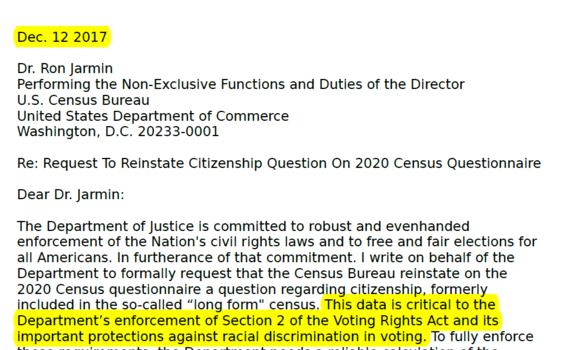 The Census Bureau is part of the Department of Commerce, which leads to the second step in the story. On March 22, 2018, Commerce Secretary Wilbur Ross testified before Congress under oath that this December 2017 request was the beginning of the process for considering the inclusion of a question on citizenship in the Decennial Census, stating that “[t]he Department of Justice, as you know, initiated the request.”

Third, on March 26, 2018, Secretary Ross issued a memo directing the Census Bureau to include a question on citizenship on the Census. In the memo, he reiterated the story that his decision was a response to the Justice Department’s December 2017 request, emphasizing that the process was initiated “[f]ollowing the receipt of the DOJ request.” 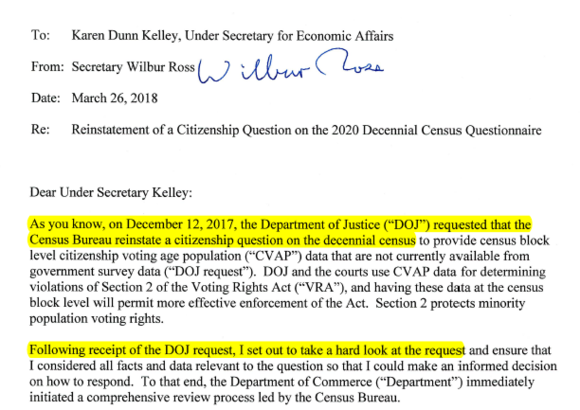 But that isn’t how things played out in the real world.

The reality, as revealed by documents we’ve obtained through our litigation against the Trump administration, is very different from the official version of events, and it suggests that Secretary Ross deliberately misled Congress about his decision-making process. In fact, discussions of citizenship and the census occurred many months before the December 2017 letter from the Justice Department — and for purposes that have nothing to do with protecting communities of color from voting discrimination.

First, on March 10, 2017 — nine months before the Justice Department request — a member of Secretary Ross’ staff sent him an email forwarding an article critical of the inclusion of undocumented immigrants in the census. In the email, the employee quoted a Census Bureau webpage making clear that “all people (citizens and noncitizens)…are to be included in the apportionment counts.” The staffer noted that “neither the 2000 nor the 2010 Census asked about citizenship.”

Next, about one month later, on April 5, 2017, Secretary Ross’s executive assistant emailed Secretary Ross’s wife to set up a call on behalf of Steve Bannon, who “asked that the Secretary talk to someone about the Census.” The “someone” went unnamed in the email (but stay tuned).

Less than one month after his Bannon-initiated conversation with an unnamed person about the Census, Secretary Ross was already exasperated that a citizenship question had not yet been added to the census. On May 2, 2017, Secretary Ross wrote an email to an aide stating that he was “mystified why nothing have [sic] been done in response to my months old request that we include the citizenship question.” [Emphasis mine]

The aide responded with an email that amounts to a smoking gun. He reassured Ross that they “will get that in place” and explained the plan: They would plant a request with the Justice Department: “We need to work with Justice to get them to request that citizenship be added…” [Emphasis mine]

Two months later, Secretary Ross received an email, solving the mystery of whom Steve Bannon sent to talk to Ross about the census. It was none other than the Kansas Secretary of State Kris Kobach, who has long pushed an anti-immigrant agenda.

On July 14, 2017, Kobach sent an email to Ross “following up on our telephone discussion from a few months ago… we talked about the fact the US census does not currently ask respondents about their citizenship.” 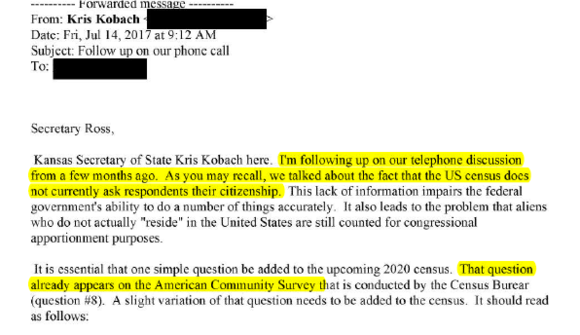 A week later, on July 21, 2017, Kobach forwarded the email to Commerce official Wendy Teramoto, confirming that he and Ross “had spoken briefly on the phone about this issue, at the direction of Steve Bannon, a few months earlier.”

Teramoto responded by setting up a meeting between Kobach and Ross for later that week:

By August 8, Ross was growing impatient and indicated in an email to an aide that he was prepared to call Attorney General Jeff Sessions directly:

The following day, the aide assured Ross that a memo on the citizenship question was coming his way:

A month later, the pressure appeared to have paid off. On September 18, a Justice Department aide wrote to Commerce official Wendy Teramoto stating that “we can do whatever you all need us to do…. The AG is eager to assist.” [Emphasis mine] Ross and Sessions then met. 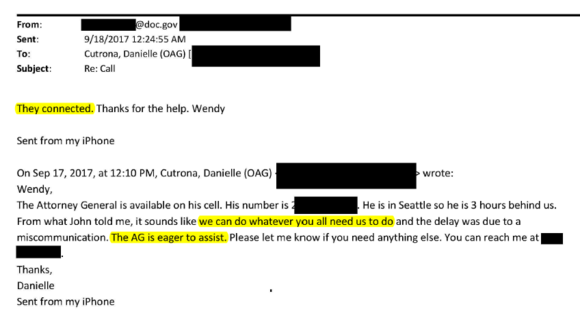 Two months later, DOJ still had not sent an official request, prompting Ross to write to an aide: “We are out of time. Please set up a call with…Justice. We must have this resolved.”

The following month, in December 2017, the Justice Department finally sent its request to the Commerce Department, which supposedly “initiated” the process of considering the addition of a citizenship question to the 2020 census.

Together, all of these documents reveal that the fix was in. To recap:

All of this took place months before the Justice Department requested that the Census Bureau add a question on citizenship to the 2020 Census — which appears to be nothing more than a cover-up for the Trump administration’s anti-immigrant agenda. And Secretary Ross appears to have personally participated in that cover-up when he misled Congress by testifying on March 22, 2018, that “[t]he Department of Justice, as you know, initiated the request.”

But thanks to the documents uncovered through our litigation, Secretary Ross has been forced to admit that the Trump Administration’s official narrative for how citizenship became part of the Census was false. In a June memo, he now admits that he started the process of adding the question “[s]oon after my appointment as Secretary of Commerce,” essentially admitting that he misled Congress. 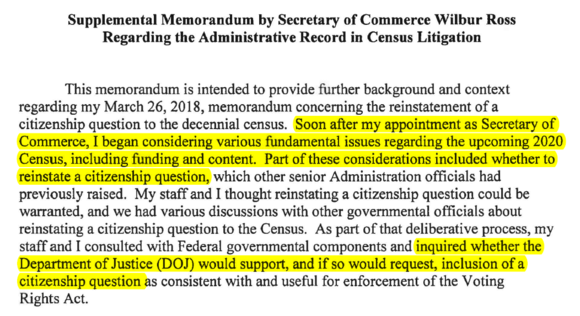 In denying the Trump administration’s motion to dismiss our lawsuit Thursday, U.S. District Court Judge Jesse Furman pointed to the documents that we obtained, noting that they cast serious doubt on the administration’s version of events. In fact, as Judge Furman found, they suggested that “that the sequence of events was exactly opposite”: 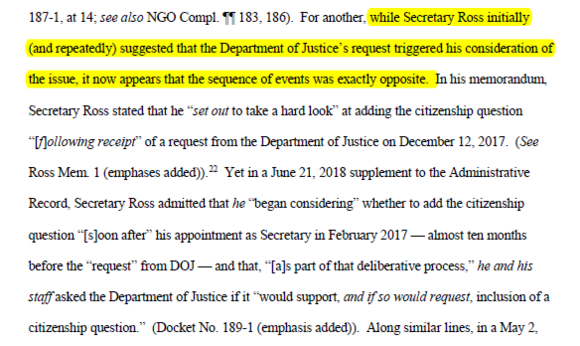 Based in part on this evidence, Judge Furman concluded that it is plausible that the Trump administration was motivated by discrimination against immigrants of color:

Our case will now proceed, with the trial likely in late October or early November — right before the midterm elections.

We’re not tired of winning. See you in court, again, President Trump.

* This case is being brought by the ACLU, NYCLU and the law firm Arnold & Porter, on behalf of the New York Immigration Coalition, Make the Road NY, CASA, and the American-Arab Anti-Discrimination Committee.

Here are the States We’re Watching as Redistricting Begins

10 Emerging Artists Share What Systemic Equality Means to Them