The January issue of Life with Archie will feature the marriage of hometown hero Kevin Keller, to his partner, an African-American, physical therapist, Clay Walker. Kevin is the first openly gay character to appear in the Archie Universe, and his upcoming nuptials have sparked a general round of applause in much of the blogosphere. The issue with their wedding, Life with Archie #16, debuts at comic book stores today and newsstands January 10.

This is by no means the first gay character or same-sex relationship featured in comics. The industry has long featured LGBT characters in both major and minor storylines. From Batwoman, an out and proud (and Jewish) DC Comic icon, to superhero boyfriends who fight crime together in the Young Avengers, to the more mundane married Doonesbury characters Chase Talbot III and Megaphone Mark (radio hosts on the opposite end of the political dial), comic book writers and illustrators have often embraced a diverse range of characters whose relationships reflect the wider world we live in. 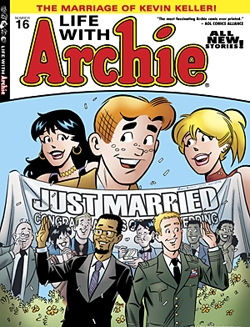 So what’s the big deal? And, as we are always asked by outraged Facebook fans when we write about pop culture, why does the ACLU care/don’t you have bigger fish to fry?

For this comic book fan, the big deal is seeing a same-sex, (interracial!) loving relationship portrayed in Riverdale. LGBT relationships in Gotham, or discussed in the politically liberal living rooms and offices of Doonesbury, sure that’s what you may expect. But Riverdale, and the wider Archie universe have long stood for the mega-wholesome ideal of the American Midwest of yesteryear — a place where writers and artists have long told us there is no room for diversity, regardless of what the truth may be.

Archie first appeared in 1941, and since then has served as the archetype for the typical, small-town American kid. In fact it wasn’t so long ago, 2003 to be exact, that Archie Comics was threatening to sue an Atlanta theater company for a piece they were set to perform depicting Archie coming out of the closet because they thought “if Archie was portrayed as being gay, that would dilute and tarnish his image.”

It’s exciting that the fictional denizens of Riverdale, like their real world Midwestern counterparts in Iowa, and in five other states (plus DC) in the US, recognize that the ability to marry and make a lifetime commitment to the person you love is totally normal. It shows what so many of us already know - what defines a marriage is love and commitment. That is a value the ACLU supports and we work hard to secure marriage for same-sex couples and win legal recognition for LGBT relationships.

In addition to the six states that allow same-sex couples to marry, three more respect marriages of same-sex couples validly performed in other states, nine provide civil unions or comprehensive domestic partnerships, and three more have more limited domestic partnership systems. That’s 20 states plus D.C. that provide some significant state-level relationship protections, and those states are home to 130 million people.

There is still more work to do. The ACLU is challenging Section 3 of the misleadingly named Defense of Marriage Act (DOMA) on behalf of our client Edie Windsor in Windsor v. United States, which is currently pending before the federal district court. We are also supporting the effort to repeal DOMA through Congressional action, in the form of the Respect for Marriage Act. Through litigation, advocacy and public education, the ACLU continues to work to expand marriage fairness at the state-level as well.

Kevin Keller, Archie, Betty, Veronica, Jughead and the whole gang, are simply characters in a made-up world, but in Kevin and Clay’s marriage and relationship we can see the potential for love, equality and fairness in the real world.

CORRECTION: A previous version of this post incorrectly state that Batgirl is a Jewish lesbian, when that honor is actually held by BatWOMAN or Kate Kane.

Repent ye and turn to the Lord. Believe in freedom of speech? Then publish this comment.