Just A Smack On The Ass: A Tale Of Sexual Assault, Vengeance And Nervous Swearing

Last month, the ACLU's Louise Melling blogged about how street harassment shames and humiliates women, and is underreported because of the stigma attached to it. While that blog was making the editing rounds here at the office, I shared my own story of how I dealt with a particularly obnoxious harasser, and my esteemed colleagues suggested I share it. Since April is Sexual Assault Awareness Month, after all, here it is. And there's gonna be swearing. I'm really sorry in advance (Mom).

I was walking to work last April, listening to a friend's CD and not thinking of much besides that I was a little late to work, and really ought to hustle to make my train. A dude passed me as I walked, and I didn't think much of that either.

All of a sudden...WHAM! Dude WALLOPED me on the backside and ran off.

No one saw it happen. But the gentle denizens of the Upper East Side sure knew something happened, because I let out an unholy yell and a good, throaty "FUCK YOU!!" I turned to see the dude hustling away in his blue and tan jacket and tan backpack.

I hesitated a moment. Did that really just happen? What should I do? Just go on with my day? I'm not sure I want to do that. And I'm pretty sure that if I just let this go, and act like it's no big deal, or it was "just a smack on the ass," I'm gonna feel pretty rotten about it for a long time to come. And my butt was really sore. He really went for it.

So I ran after the dude.

It's possible this guy was crazy. This was something I needed to determine, and also I wanted to get a description, since by this point I had decided that if I was going to be late to work pursuing this mofo, I was damn well gonna call the police. I caught up to him as he was going into the Citibank.

"You think that shit is funny? You like hitting women, huh? You think that's the correct way to act? Whatsamatterwityou?" All of a sudden, I was Joe Pesci. I swear a lot when I'm nervous. It's a terrible habit. Perhaps you've caught on.

"Ma'am I don't know what you're talking about."

"You know goddamn well what I'm talking about. YOU DON'T HIT WOMEN, ASSHOLE." At this point I was screaming into the bank. The whole lobby was looking at me.

Dude got in my face. And this is where it gets kind of hilarious. "How dare you disrespect me in public?" he said. Oh. My. God. He. Did. Not. "I mean, call the police or something, but don't embarrass me like that. Fuck you."

"Good idea, buddy. I WILL call the police." I called 911 and told them about the incident and the coordinates.

Me (to operator: "I'm sorry, ma'am it's just he's antagonizing me."

Him: "You calling the police?"

He started walking away after that. The 911 lady advised me to stay put. Good call. I figured I had enough of him without backup. The police came a few minutes later, and I told them the story. I told them I knew they dealt with bigger things than this. But if it doesn't get reported, it will keep happening. And maybe we can scare this dude enough that that will be one less guy hitting women in the street. The cops had me ride around in the car with them to see if we could find them. (Incidentally, those squad cars? Absolutely no legroom to speak of. In case you ever need extra incentive to not get arrested. Not comfy.)

We couldn't find him, but the cops (there were four of them by the end of this) took my statement and contact info. They commended me on my description. Which is good, as that validates a lot of Law and Order viewing.

I'm realistic. I knew they were never going to arrest this guy. But here's the thing, and the point to this whole long, profane story. I know there are a lot of people who think it wasn't that big a deal. But the truth of the matter is, what this guy did was sexual assault. "Forcible touching and harassment," if you want to get specific.

Sexual assault doesn't always necessarily mean something as horrible as rape. And too often street harassment is unreported, and douchebags like this think they can get away with it because the girl is gonna be too embarrassed or too meek to do anything about it. Or they think it's "just a slap on the ass." And that's not right, you guys. I don't know how other women feel about their posteriors, but you don't very well get to smack the hell out of it willy-nilly because you feel entitled to do so. There will be repercussions.

To the NYPD's credit, they did follow up, and the detective told me that if I really wanted to press charges, she would help me do that, even if it meant looking through a lot of surveillance tape and looking at lineups and all that stuff. I opted not to, figuring that they had this guy's description, and if he did it again, he'd be in a lot of trouble. But something tells me he's not going to. I think I scared him. Or as the detective said, "So you ran up and confronted him and screamed at him in a bank."

I know what happened to me could have been a lot, lot worse. But someone doesn't have to be raped to be humiliated, violated and hurt. Sometimes, all it takes is a smack on the ass.

(Cross-posted to Feministing and Daily Kos.) 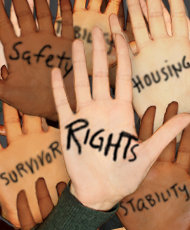 DeVos is Rolling Back Protections for Sexual Harassment and Assault Survivors...