I should really be studying for my upcoming final exams right now. Instead, I’m a bit distracted spending the final months of my junior year fighting the School District of Manatee County’s sexist attack on my body.

My life was completely different just a month ago. Over spring break, I was a normal teenager having a blast at the lazy river in Orlando. It was so much fun, and so hot, that I got sunburnt pretty badly, which made the car ride home uncomfortable.

Keeping in mind that I could barely handle a seatbelt against my skin, I picked out my outfit for the following school day: my most comfortable long-sleeve t-shirt, which I would wear without a bra. I figured this choice of attire would cause the least irritation to my skin. Little did I know of the firestorm that was on its way. 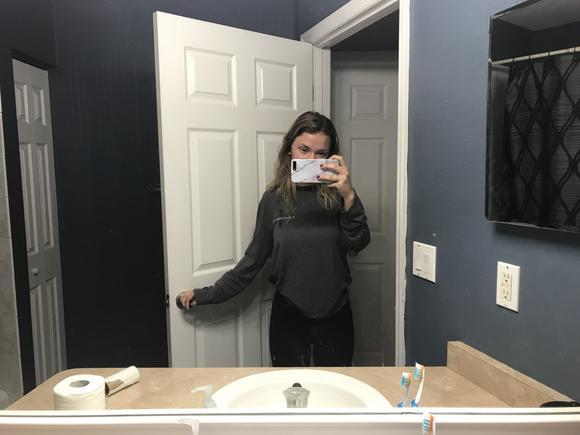 That morning at school went along as any other — until I got pulled out of class to go to student services. Apparently, the dean at my school wanted to speak to me. I sat in the office, nervously biting my nails, for what seemed to be forever. “Why does the dean want to see me?” I wondered. “What could I have done wrong?”

Roughly 15 minutes went by before the dean called me into her office. She was accompanied by the principal. She was shutting the door, she told me, because there were boys in the office, and she didn’t want me to get “embarrassed.” That’s when I knew what this whole ordeal was about. My cheeks began to flush.

A teacher had called the office because she had “concerns that I wasn’t wearing a bra,” and it was distracting boys in the classroom, the dean said. I looked her dead in the face and asked her if she was joking. “Unfortunately not, sweetie,” she replied. The principal intervened and backed her up. I sat there in shock that the principal and dean of my school were having a conversation about my nipples.

The dean eventually asked me to wear a shirt underneath the one I was wearing to constrict the movement of my breasts and conceal my nipples. But after I doubled up on t-shirts, she still seemed dissatisfied.

That’s when she asked me to “move around.” Weirded out, I asked her what she meant.

“You know,” she said, shaking her body. “Move around.”

After I begrudgingly paraded my body in front of her, the dean resumed brainstorming ways to “fix” my nipple situation. And then, eureka:  “Band-aids!” she said. I was disgusted.

The dean sent me to the clinic, where I was told to use band-aids to ‘X’ out my nipples in the restroom. I stared in the restroom mirror with hot tears running down my face, unable to pull myself together. I bemoaned that if I were a smaller girl, this wouldn’t have happened to me. And it definitely wouldn’t have happened if I were a boy. I typically don’t struggle with body image issues, but that day I surely did.

With my shirt pulled up and tears streaming down, I stared in the mirror. In that moment, I hated myself, my body, and everyone who made me feel shame about the flesh that I was born in. I wanted to speak up for myself, but I felt intimidated by their authority.

I was sent back to class, still in tears. My best friend rushed me to the bathroom. When I showed her my bandages, she shared my rage.

Unable to pull myself together, I sent my mom a text telling her I felt attacked because of my gender. She came to my rescue right away.

When I got home that day, I logged onto Twitter and vented about what I went through at school. I sent my school a tweet from the heart: “Stop sexualizing my body.” The school proceeded to block me.

When friends and I planned a “Bracott” to support the destigmatization of female bodies, our school threatened to discipline students who participated. We just wanted our school to recognize female students as equal to our male classmates, not as sexual objects that are “distractions” in the classroom.

It’s been four weeks since the incident, and it’s clear that my nipples have never been the real distraction. As a student, nothing is more distracting to my ability to learn than being pulled out of class and made to feel ashamed about my own chest. That’s why I’m demanding that my school stop enforcing a dress code in a matter that discriminates against teenagers based on their sex.

I’ve been forced to miss several days of school, but I won’t miss the chance to do what’s right. I hope that by speaking out, I’ll help ensure that more schools treat girls’ bodies with equal respect, rather than shaming them with bandages.

Read the demand letter sent by the American Civil Liberties Union and the ACLU of Florida to the School District of Manatee County.

The Absurd Attacks on the ACLU

DeVos is Rolling Back Protections for Sexual Harassment and Assault Survivors...