Lilly Ledbetter: Celebrating a Champion Still Fighting for Us

Five years ago today, I was honored to stand with Lilly Ledbetter at the White House as President Obama made the legislation bearing her name his first major bill signed into law. 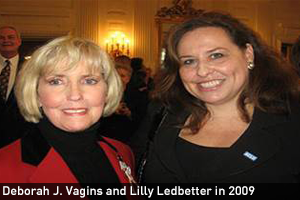 With the stroke of a pen — actually several pens, President Obama made today a good day for all employees, who — regardless of gender, race, national origin, age or disability — are illegally receiving smaller paychecks than their colleagues….

But even more, by signing the Lilly Ledbetter Fair Pay Act into law, with the stroke of his pen President Obama sent a clear message about our values as Americans. Today, we all took a step closer to ending workplace discrimination. Today, our commitment to equality and equal access to the American dream gleamed a little brighter. Today, we all got a little closer to building an America we can be proud of, once again.

But there is more to be done. The next stop for the fair pay fight: the Paycheck Fairness Act. The Lilly Ledbetter Fair Pay Act restored rights lost in the civil rights rollback of recent years. The next step is to amend the Equal Pay Act — to close, for once and for all, the pay gap between men and women and allow employees to finally bring home every dollar they rightfully earn.

While we continue to urge Congress to act, the Administration can take action now to help ensure pay equity. Last night in his State of the Union, the President said he would use his executive authority to expand opportunity for more American families, and that type of action is exactly what we need now to advance pay equality for all workers.

The President could issue an executive order banning retaliation against the employees of federal contractors for disclosing or inquiring about their wages. It's not everything that's in the Paycheck Fairness Act, but it is an important protection with which to start. 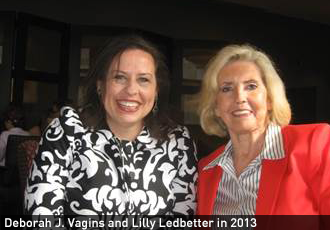 This doesn't mean the Lilly Ledbetter Fair Pay Act wasn't a major accomplishment. This legislation gave workers the chance to have their day in court to challenge pay discrimination and reminded our country that this type of discrimination continues today. But we need new tools like the Paycheck Fairness Act and a non-retaliation Executive Order to challenge the discrimination itself. We continue to celebrate – and stand with – Lilly in her courageous fight for all of us.

The Senate Is Voting on Monday to Destroy Obama’s Fair Pay and Safe Workplace...