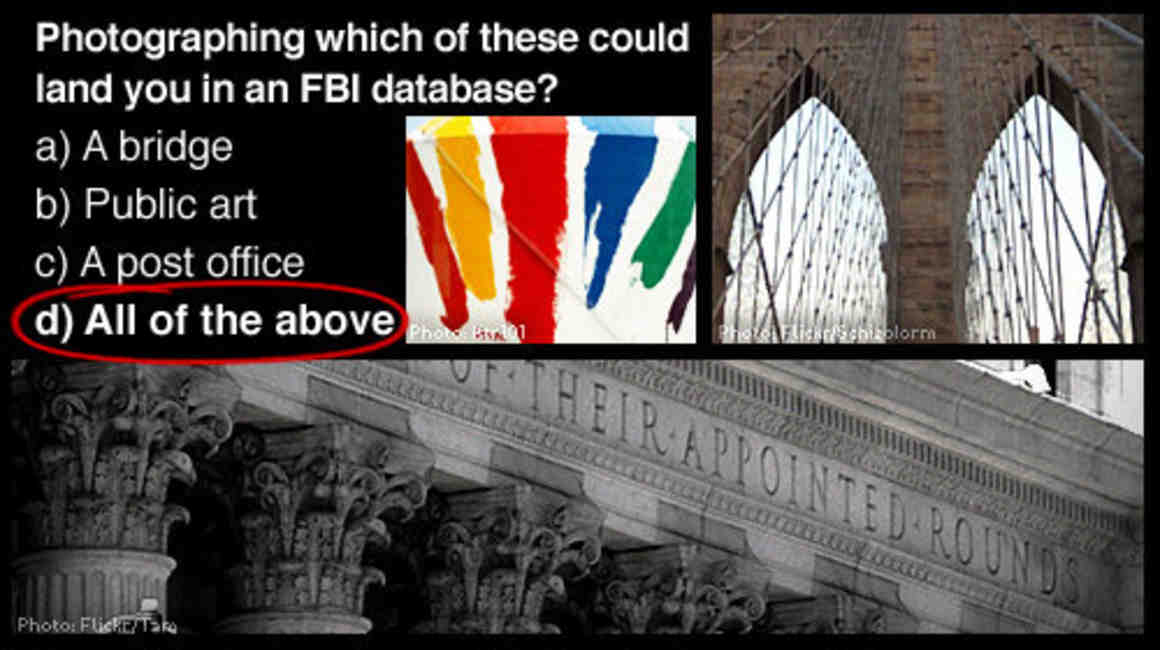 The ACLU of California, the ACLU, Asian Americans Advancing Justice - Asian Law Caucus, and the law firm Bingham McCutchen have filed a lawsuit challenging the federal government's Suspicious Activity Reporting program — a vast expansion of the federal government's domestic intelligence network. The SAR program supposedly facilitates the collection and sharing of information about activity that appears "suspicious," but in practice it targets First Amendment-protected activity, encourages racial and religious profiling, and violates federal law. The plaintiffs are five U.S. citizens whose information has been entered into counterterrorism databases for engaging in lawful conduct, and who have been subject to unwarranted law enforcement and scrutiny. The lawsuit was filed in July 2014 in the U.S. District Court for the Northern District of California. In March 2017, the District Court granted the government’s motion for summary judgment, upholding the SAR program’s standard for data collection. We are appealing that ruling to the Ninth Circuit Court of Appeals.

Since at least 2008, the federal government has encouraged state and local law enforcement agencies, as well as members of the general public, to collect and report information that appears "suspicious" and that might have a nexus to terrorism. These "Suspicious Activity Reports," or "SARs" are stored and shared through intelligence databases that make up the Nationwide Suspicious Activity Reporting Initiative.

Troublingly, the standards defining "suspicious activity" do not require any reasonable suspicion of criminal activity, and information about innocent activities by ordinary people ends up in counterterrorism databases to which local, state, and federal law enforcement agencies have access. Because these loose standards define practically anything and everything as "suspicious," the SAR program opens the door to racial, ethnic, and religious profiling, as we've repeatedly seen from actual SARs that have been revealed publicly. SARs can haunt people for decades, as they remain in federal databases for up to 30 years. An individual who is the subject of a SAR is automatically subjected to law enforcement scrutiny.

The five plaintiffs who were swept up by the SAR program or a precursor were all engaging in innocuous, lawful, and in some cases First Amendment-protected activity, such as photographing sites of aesthetic interest, playing video games, and waiting at a train station. Their experiences drive home that SARs often report activity that is anything but suspicious.

A Department of Justice regulation implemented in 1978 allows the collection, maintenance, and dissemination of "criminal intelligence information" about someone "only if there is reasonable suspicion that the individual is involved in criminal conduct or activity and the information is relevant to that criminal conduct or activity." The government, however, has violated this regulation by adopting and implementing standards for suspicious activity reporting that do not require reasonable suspicion of criminality. The SAR standards challenged in our lawsuit were issued by the Justice Department and the Program Manager for the Information Sharing Environment (PM-ISE), which was created in 2004 in an effort to facilitate the exchange of terrorism and homeland security information among law enforcement agencies.

DOJ and PM-ISE train state, local, and tribal law enforcement agencies as well as private entities to collect information based on the standard each agency has adopted, and to submit the information in the form of a SAR, either to a fusion center or the FBI. (Fusion centers are generally operated by state or local government agencies and are meant to collect and analyze threat-related information, including SARs.) If a Suspicious Activity Report has been deemed to meet DOJ or ISE's standards, it is uploaded to one or more national databases, such as the FBI's eGuardian system, where it can be accessed by the FBI and law enforcement agencies across the country. As a result, innocent people swept up by the program are subject to law enforcement scrutiny at both the local and federal levels, with information retained about them for as long as 30 years – even when the FBI determines the SAR has no connection to terrorism.

This program does not keep us safe, but it certainly makes us less free. The lawsuit challenges the government's standards for suspicious activity reporting as arbitrary and illegal because they conflict with the federal government's own requirement that criminal intelligence information only be shared where there is reasonable suspicion of criminal activity. It is also challenging the federal agencies' circumvention of the notice-and-comment process required by the federal Administrative Procedure Act. By holding the federal government accountable to its own rules and democratic processes, we seek to end the collection of information about innocent Americans engaged in lawful and constitutionally protected activity.

James Prigoff is an internationally renowned photographer of public art and a former business executive.

Tariq Razak is a U. S. citizen of Pakistani descent who graduated from UC Irvine in 2007 and now works in the biotech industry.

Wiley Gill is a custodian at California State University, Chico.

Khaled Ibrahim is a U.S. citizen of Egyptian descent who works for a computer network consulting and service company in Silicon Valley, California.

Suing to Defend Americans' Right to Take Pictures in Public