The American Civil Liberties Union and the ACLU of Louisiana have filed a federal lawsuit against a public school in Sabine Parish that harassed a non-Christian student and has a long history of proselytizing students and promoting religion. The lawsuit was filed on behalf of two parents, Scott and Sharon Lane, and their three children, including their son, C.C., who is a Buddhist of Thai heritage.

According to the complaint filed in the U.S. District Court for the Western District of Louisiana, C.C enrolled in Negreet High School, which serves students in kindergarten through twelfth grade, earlier this year as a sixth-grader and quickly became the target of harassment by school staff. His science teacher, Rita Roark, repeatedly taught students that the Earth was created by God 6,000 years ago, that evolution is “impossible,” and that the Bible is “100 percent true.”

When Plaintiffs objected, Sabine Parish Superintendent, Sara Ebarb, told them that “this is the Bible belt.” She suggested that C.C. should “change” his faith or transfer to another district school 25 miles away where, in her words, “there are more Asians.” Ultimately, C.L.’s parents did transfer him to another school to protect him, but school officials at that school also unconstitutionally promote religion.

Beyond Roark’s classroom, the school also regularly incorporates official Christian prayer into class and school events. School officials display religious iconography through hallways and classrooms, including a large portrait of Jesus Christ, and an electronic marquee in front of the school scrolls Bible verses as students enter the building.

The lawsuit asks the court to issue an order prohibiting the school district from continuing to promote religion or disparage Plaintiffs’ faith and to require the district to reimburse the Lanes for the cost of transporting C.C. to another school. 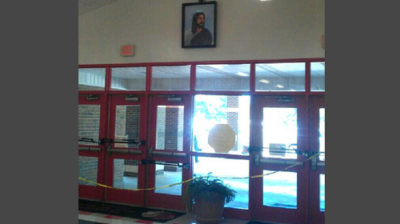