Challenging Gene Patents – What You Can Do 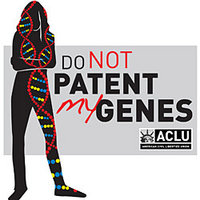 In March 2010, a federal district court ruled that the patents on two human genes relating to hereditary breast and ovarian cancer are invalid. While this was a significant victory for women's health and scientific freedom, the fight against gene patents is far from over. Myriad Genetics, a biotechnology company, filed an appeal with the Federal Circuit Court of Appeals in June, asserting that it has the right to patent the BRCA1 and BRCA2 genes.

We will continue to challenge these patents in court, but our lawsuit is not the only way we're fighting against gene patents. Join in our public education and outreach campaign to stop the patenting of human genes. Learn about it. Spread the word. And take action.

TAKE ACTION AND SPREAD THE WORD

Become a fan of our Facebook page
Don't Patent My Genes! Liberate the Beast Cancer Genes

Tell Congress your genes aren't for sale
Representative Xavier Becerra (D-CA) introduced H.R. 977, the "Genomic Research and Accessibility Act" during the 110th Congress to bar the issuance of gene patents. He would like to reintroduce a new version of the bill, but needs your help. Representative Becerra needs support from colleagues on both sides of the aisle if his bill has any chance of being enacted.
Send a message to lawmakers

Write Blogs and Letters to the Editor

A blogpost by Barbara Brenner, Executive Director of Breast Cancer Action, is one example

Tell us your story
If you have gotten the BRCA genetic test or seriously considered getting tested, please share your experience with us through this survey