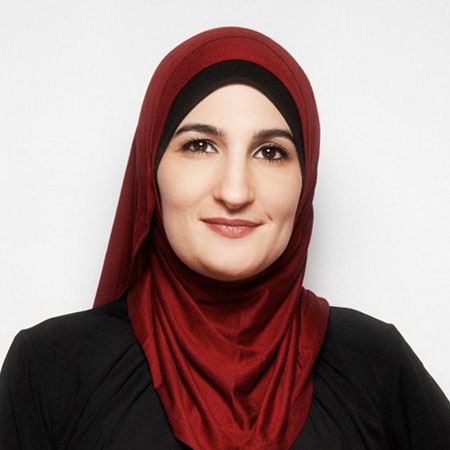 This has been a difficult year for so many communities. This Administration has kept their promises and unleashed racist inhumane policies targeting communities of color, making previously targeted communities increasingly vulnerable in this new environment. Amidst the chaos, I have held on to an image that fills my heart with hope - the thousands of people who showed up at airports across the country demanding that we let in Muslim immigrants and refugees from countries placed on a ban by Trump. As a Muslim American who has been working to defend the rights of Muslims in the post 9/11 era, this act of solidarity was especially important and meaningful.

As a Palestinian American, daughter of Palestinian immigrants who immigrated here from living under a brutal military occupation it was especially hurtful to see stateless Palestinians listed on the latest Muslim refugee ban. How can we deny a people who have suffered grave injustice from entering the United States, a country that welcomed my parents who wanted to raise their children in safety and security. Each Muslim ban has separated families, many of whom live in my community in Bay Ridge, Brooklyn. For example, Yemeni American fathers longing for their children who are in visa limbo in countries like Ethiopia, Malaysia and Djibouti. The hardest thing for me as a mother has been explaining to my beautiful, aware, Palestinian Muslim American children why the country they love is banning people who look like them from coming here. How do I explain to teenagers why this administration has such disdain for them and their faith. I am grateful for our allies and their acts of solidarity that are helping my children and I cope with this pain and trauma.

This administration has been relentless from putting forth four versions of Muslim bans to targeting undocumented immigrants in mass deportation sweeps to manipulative, hateful rhetoric against on our communities in response to terror attacks in order to pursue their white supremacist agenda. But Muslims did not need Donald Trump to remind them of the system-deep anti-Muslim sentiment that exists in our nation. Since the horrific attacks of 9/11, Muslim in America have been met with racial and religious profiling by all levels of law enforcement, unwarranted and blanket surveillance, deportations and registration programs, no-fly lists and an exponential rise in hate crimes against our communities or these perceived to share our faith. For so long, we were forgotten and our fellow Americans for the most part stood on the sidelines and our communities suffered in silence. But Muslim communities continued to organize and despite the fear-mongering we still managed to claim big victories including the passage of the Community Safety Act in New York City which created the first ever independent oversight over the New York Police Department and the incorporation of Muslim holidays in the New York City Public Schools calendar.

But over the last year, I feel a shift. This year was the first time we saw mass mobilization of allies standing up for Muslims and fighting back against the racism and bigotry directed at Muslims in such a public way. My visible participation in the Women’s March on Washington, the largest single day protest in US history was another attempt at mainstreaming the communities I love and centering their issues as priorities for the resistance. I am so proud of the Muslim American organizers who have been doing this work for years and building the foundation for the resistance and movement we find ourselves in. I ask my fellow Americans not to be distracted by this President or his administration and to keep the focus on building power and protecting the most marginalized amongst us. We know our history. We know that many horrific things have happened on the watches of the American people because a silent majority turned a blind eye to grave injustice - commit to never being part of the silent majority. We are in this together.