The ACLU Campaign to Expose and Stop Illegal Domestic Spying 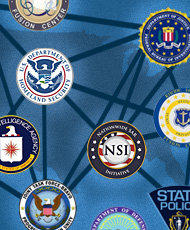 Today the government is spying on Americans in ways the founders of our country never could have imagined. The FBI, federal intelligence agencies, the military, state and local police, private companies, and even firemen and emergency medical technicians are gathering incredible amounts of personal information about ordinary Americans that can be used to construct vast dossiers that can be widely shared through new institutions like Joint Terrorism Task Forces, fusion centers, and public-private partnerships.  And this surveillance often takes place in secret, with little or no oversight by the courts, by legislatures, or by the public.  The ACLU is dedicated to uncovering this secret surveillance network so Americans can protect their rights and demand accountability from these law enforcement and intelligence agencies, and from their elected representatives.

The fear of terrorism has led to a new era of overzealous police intelligence activity directed, as so often in the past, against political activists, racial and religious minorities, and immigrants. This new surveillance activity is not directed solely at suspected terrorists and criminals. It's directed at all of us. Increasingly, the government is engaged in suspicionless surveillance that vacuums up and tracks sensitive information about innocent people. The erosion of reasonable restrictions on government's power to collect people's personal information is putting the privacy and free speech rights of all Americans at risk. The American Civil Liberties Union and its affiliates across the country have uncovered and reported on many aspects of this growing domestic surveillance activity over the last several years. Our updated Spy Files website combines the information we've collected from Freedom of Information Act requests, ACLU lawsuits and reports, and news accounts so that members of the public can begin to get a comprehensive view of how these networked intelligence activities threaten their civil liberties.

As the nation's predominant law enforcement agency, the Federal Bureau of Investigation (FBI) has robust powers to peer into the lives of American citizens. But the FBI claims even broader authorities when acting in the nebulous realm of  “domestic intelligence,” where its actions are largely hidden from public view and the procedural checks and balances that apply in criminal investigations are all but non-existent.   The ACLU has exposed FBI abuse of its investigative authorities, through Freedom of Information Act lawsuits against FBI Joint Terrorism Task Forces, the FBI “racial and ethnic mapping” program, and the FBI eGuardian suspicious activity reporting program.

Spying With No Direction

The Department of Homeland Security (DHS) was established in 2003 by combining 22 separate federal agencies, several with law enforcement powers and intelligence missions. As a relatively new member of the Intelligence Community, DHS has struggled to establish a clearly defined role for its intelligence activities, leading at times to error and overreach that implicates the rights of innocent persons. The ACLU is uncovering improper DHS  surveillance activities, like suspicion-less border searches, the production of flawed intelligence reports maligning political advocacy organizations, and the implementation of a dubious behavioral profiling program at airports. DHS is also a primary funder of state and local fusion centers and participates in suspicious activity reporting programs, each of which are, or have the potential to, infringe on civil liberties.

The U.S. military is funded by American taxpayers to protect our nation and its inhabitants from foreign enemies, not to spy on Americans.  The ACLU has been, and remains at the forefront of exposing U.S. military spying programs that target or otherwise sweep up Americans’ personal information in their wide intelligence-gathering programs.

More About Department Of Defense/NSA Spying

Turning Their Focus on the U.S.

As a covert intelligence agency, the CIA may use theft, blackmail, extortion and other dubious methods to collect information. The implications of such behavior on the civil rights and privacy of Americans are obvious if these tools are used domestically – as they may have been since the 9/11 attacks. Indeed the 2004 establishment of the Office of the Director of National Intelligence (DNI) and the Information Sharing Environment (ISE) all but erase the lines between foreign and domestic intelligence collection.

Spying in Your Hometown

Abuses of intelligence powers are not limited to federal authorities. In the past, state and local police forces were known to maintain political intelligence units (sometimes known as Anti-Subversive Squads, or Red Squads), which illegally spied upon and sabotaged numerous peaceful groups throughout the twentieth century. They often amassed detailed dossiers on political officials and engaged in "disruptive" activities targeting political activists, labor unions, and civil rights advocates, among others. The ACLU has gathered substantial evidence that state and local law enforcement agencies around the country are once again using their authorities to spy on or obstruct First Amendment-protected activities of Americans, often in cooperation with federally-sponsored intelligence programs, such as fusion centers and suspicious activity reporting programs.

Multiplier for Spying in Local Communities

The FBI conducts its counterterrorism intelligence operations primarily through Joint Terrorism Task Forces (JTTF). According to the FBI's website, over 600 state, local and federal agencies participate in JTTFs, including the U.S. military and, at one point at least, the Central Intelligence Agency (CIA).  In 2004 the ACLU engaged in a FOIA campaign that uncovered FBI JTTF spying on political advocacy organizations.  A follow-up Inspector General investigation proved the FBI lied to hide these improper activities from Congress and the American public.

Over the last few years, federal, state and local authorities have initiated “suspicious activity reporting” (SAR) programs to encourage law enforcement officers, intelligence and homeland security officials, emergency responders, and even the public to report the “suspicious” activities of their neighbors to law enforcement and intelligence agencies. The problem is that many of the behaviors these SAR programs identify as precursors to terrorism include innocuous and commonplace activities such as using binoculars, taking pictures, drawing diagrams and taking notes. SAR programs increase the probability that innocent people will be stopped by police and have their personal information collected for inclusion in law enforcement and intelligence data bases. They also open the door to racial profiling and other improper police practices by giving police unwarranted discretion to stop people who are not reasonably suspected of wrongdoing.