The FBI's Unchecked Abuse of Authority

On September 4, 2013, James B. Comey was sworn in as the 7th director of the Federal Bureau of Investigation. Mr. Comey is taking the helm of an agency that has been radically transformed during the 12-year term of Director Robert S. Mueller, III, into a domestic intelligence and law enforcement agency of unprecedented power and international reach.

The FBI remains widely admired on Capitol Hill and within the Obama administration, despite a record of extraordinary abuse—particularly targeting racial and religious minorities, immigrants, and protest groups under the guise of counterterrorism after 9/11.

The abuse, enabled by a roll-back of post-Watergate intelligence reforms and encouraged by long-standing Justice Department and FBI practices, has subverted internal and external oversight by squelching whistleblowers, imposing and enforcing unnecessary secrecy, and actively misleading Congress and the American people.

Unleashed and Unaccountable: The FBI's Unchecked Abuse of Authority documents this extraordinary expansion of FBI power over the last 12 years.

As Comey's tenure begins at the FBI, Congress and the president should take this opportunity to conduct a comprehensive examination of the FBI's policies and practices to identify and curtail any activities that are unnecessary, ineffective, or misused. Otherwise, FBI officials and certain members of Congress will undoubtedly demand that the new director stay the course, no matter how disastrous it may be for American civil liberties and privacy rights.

By exposing and documenting these errors and abuses in a comprehensive manner and offering recommendations to ensure the FBI respects civil liberties and civil rights, Unleashed and Unaccountable establishes a foundation for reform.

Read the Report: Unleashed and Unaccountable

On September 4, 2013, James Comey became the 7th director of the Federal Bureau of Investigation. The first change in leadership at the bureau since the 9/11 attacks provides Congress, the president, and the attorney general the opportunity to conduct a comprehensive evaluation of the FBI’s post-9/11 policies and programs. Over the last 12 years, the FBI has become a domestic intelligence agency with unprecedented power to peer into the lives of ordinary Americans and secretly amass data about people not suspected of any wrongdoing. That power has inevitably led to persistent and unconstitutional abuses of authority, some of which are highlighted below. For a comprehensive look at how the FBI once again became a domestic spying agency and its impact on civil liberties and privacy, read "Unleashed and Unaccountable: The FBI’s Unchecked Abuse of Authority." 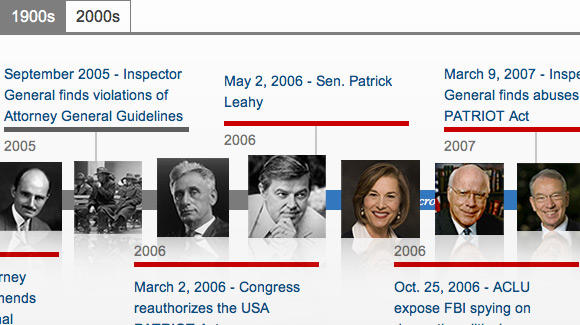 Read more about the FBI in our interactive timeline.

History of the FBI Timeline

Unleashed and Unaccountable: The FBI's Unchecked Abuse of Authority