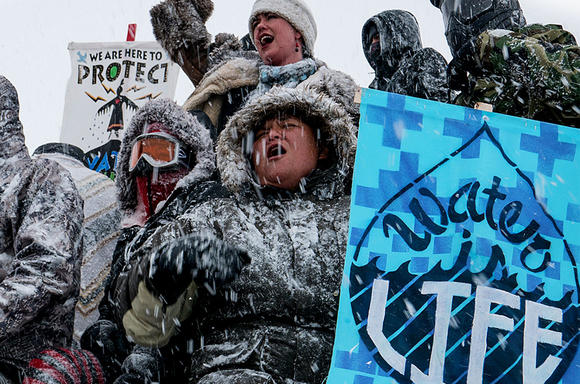 Make the call – enter your phone number (including area code):

Protect the right to protest in North Dakota by vetoing House Bill 1304 and House Bill 1426. Non-violent demonstrators shouldn’t face exorbitant fines and felony charges or be forced to suffer from tear gas. Veto bills that threaten the constitutional right to protest.

House Bill 1426 doubles criminal penalties and targets water protectors under so-called riot charges. “Instigating” a riot could face protesters with up to 10 years in prison and a $20,000 fine. “Engaging” in a riot could mean a year in prison and a $3,000 fine – compare this to current law which maxes at 30 days in jail and a $500 fine.

House Bill 1304 makes it a crime to wear a mask. If passed, police and courts could put protesters in prison and fine them $3,000 for wearing kerchiefs to protect themselves from teargas.

Call Governor Burgum and urge him to veto HB1426 and HB1304 and protect the right to protest in North Dakota.

Defiant as Ever, Water Protectors Vow to Continue the Fight Against the...

Police at Standing Rock Are Using Life-Threatening Crowd-Control Weapons to...