The Criminalization of Private Debt

An estimated 77 million Americans have a debt that has been turned over to a private collection agency. Thousands of these debtors are arrested and jailed each year because they owe money. Millions more are threatened with jail. The debts owed can be as small as a few dollars, and they can involve every kind of consumer debt, from car payments to utility bills to student loans to medical fees. These trends devastate communities across the country as unmanageable debt and household financial crisis become ubiquitous, and they impact Black and Latino communities most harshly due to longstanding racial and ethnic gaps in poverty and wealth. 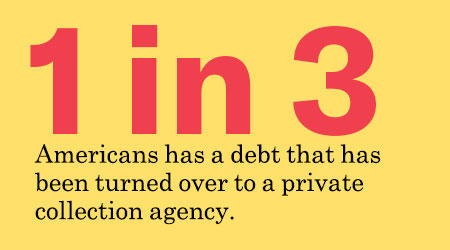 Debtors’ prisons were abolished by Congress in 1833 and are thought to be a relic of the Dickensian past. In reality, private debt collectors — empowered by the courts and prosecutors’ offices — are using the criminal justice system to punish debtors and terrorize them into paying, even when a debt is in dispute or when the debtor has no ability to pay.

The criminalization of private debt happens when judges, at the request of collection agencies, issue arrest warrants for people who failed to appear in court to deal with unpaid civil debt judgments. In many cases, the debtors were unaware they were sued or had not received notice to show up in court.

There are tens of thousands of these warrants issued annually, but the total number is unknown because states and local courts do not typically track these orders as a category of arrest warrants. In a review of court records, the ACLU examined more than 1,000 cases in which civil court judges issued arrest warrants for debtors, sometimes to collect amounts as small as $28. These cases took place in 26 states:

Even without arrest warrants, the mere threat of jail can be effective in extracting payment — even if that threat is legally unfounded. In the case of debts involving bounced checks, private collection companies now have contracts with more than 200 district attorneys’ offices that allow them to use the prosecutor’s seal and signature on repayment demand letters. It’s estimated that more than one million consumers each year receive such letters threatening criminal prosecution and jail time if they do not pay up. But review of company practices has documented that letters often falsely misrepresent the threat of prosecution as a means of coercing payments from unknowing consumers.

When Americans fail to repay a financial obligation, creditors usually hire debt collectors to go after the debtors or sell the debts to companies that specialize in collections. More than 6,000 debt collection firms operate in the United States, collecting billions of dollars each year.

These collectors flood small-claims and other state courts with lawsuits seeking repayment. Millions of collection lawsuits are filed each year in state and local courts that have effectively become collectors’ courts. The majority of cases on many state court dockets are debt collection suits, and in many state courts, debt-purchasers file more suits than any other type of plaintiff.

Debt collection lawyers can file hundreds of suits a day, often with little evidence that the alleged debt is actually owed. Once a lawsuit is filed, the process is stacked against defendants, the overwhelming majority of whom are not represented by an attorney. And collectors have a big advantage in small claims courts, which provide very limited due process protections to debtors.

Many courts churn through collection lawsuits with astonishing speed and little scrutiny.  Over 95 percent of debt collection suits end in favor of the collector, usually because alleged debtors do not mount a defense.  In many cases, defendants did not know they had been sued. And, of course, collectors have little incentive to give proper notice to the defendants. 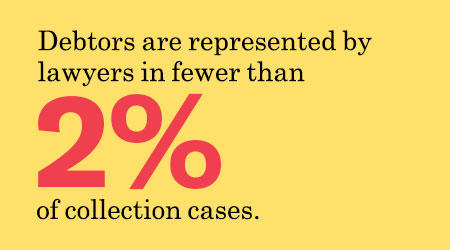 Once a collection company has won a judgment, it has multiple methods to collect the money owed.  It can seek to have a defendant’s paycheck or bank account garnished, seize their cars or other personal property, or record a lien against their property. Creditors can also ask courts to require defendants to be in court for post-judgment proceedings. At these proceedings, often called “judgment debtor examinations,” defendants are required to answer questions about their wages, bank account balances, property, and assets. Debt collectors use these responses to take other steps to collect on the judgment.

If the debtor does not appear in court for the judgment debtor exam, creditors can ask the judge to issue a civil warrant for the debtor’s arrest.  In the cases the ACLU documented, debtors failed to appear at hearings for various reasons, most often because they did not receive notification of the court date or even of the existence of the lawsuit. Some were unable to appear because of work, child care responsibilities, lack of transportation, physical disability, illness, or dementia.  We found two cases in which debtors missed hearings because they were terminally ill and died shortly after warrants were issued for their arrest.

The Role of Civil Court Judges

State court judges have the power to order the debtor’s employer to garnish the debtor’s wages and authorize a sheriff to seize the debtor’s property. In more than 30 states, judges — including district court civil judges, small-claims court judges, clerk-magistrates, and justices of the peace — are allowed to issue arrest warrants for failure to appear at post-judgment proceedings or for failure to provide information about finances. These warrants, usually called “body attachments” or “capias warrants,” are issued on the charge of contempt of court. In some cases, debtors are threatened with jail for contempt of court if they do not pay or agree to payment plans.

Once arrested, debtors may languish in jail for days until they can arrange to pay the bail. In some cases, people were jailed for as long as two weeks. Judges sometimes set bail at the exact amount of the judgment. And the bail money often is turned over to the debt collector or creditor as payment against the judgment. 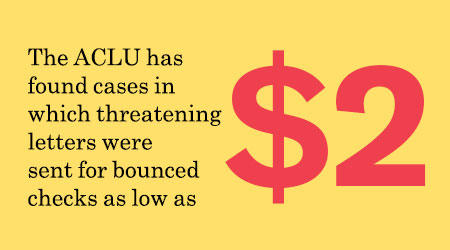 Many of those arrested said they had no idea a warrant had been issued for their arrest. They learned of the warrant only when police pulled them over for a broken taillight or traffic violation and the warrant showed up in computer records. Some were arrested at home in the middle of the night or at their workplace. In some cases, people were arrested when police officers came to their home because of an incident involving another family member or when they were witnesses to a crime and the police discovered the warrant after obtaining their identifying information. In other cases, debtors with warrants issued against them were arrested when law enforcement conducted a sweep of all residents of public housing who had outstanding warrants for any reason.

These arrests impose real costs on the courts and jails in time and resources. But the damage these arrests do to debtors — including those whose debts are disputed — in terms of lost wages, lost jobs, and psychological distress can be enormous. Arrest warrants, even if they don’t result in jailing, can cause long-lasting harm because such warrants may be entered into background check databases, with serious consequences for future employment, housing applications, education opportunities, and access to security clearances.

Local prosecutors have no role in civil debt collection lawsuits. But they have a central role when it comes to money owed due to bounced checks.

Every state has criminal laws dealing with bad or bounced checks, and prosecutors are required to review these cases to determine if they are subject to prosecution. Unfortunately, in many places, district attorneys seeking to get these cases off their desks and divert defendants from court have decided to hand over enforcement to private collection companies even when no crime has been committed. These companies face a conflict of interest when issuing repayment demand letters threatening criminal prosecution and jail time because they profit when an unwitting recipient pays up in response to a false threat of prosecution.

Private debt collectors have entered into hundreds of partnerships with local district attorneys’ offices to get people to pay on bounced check claims under threat of prosecution. Some collectors with these contracts send letters on the district attorney’s letterhead to threaten people with criminal prosecution, jail, and fines — even when the prosecutor hasn’t reviewed the case to see if a criminal violation occurred. 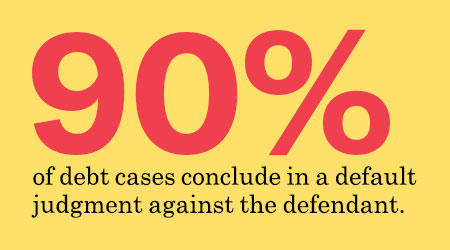 The companies collect not only restitution for the unpaid check. They nearly always tack on a variety of fees, including fees to attend a diversion program run by these same companies. Most of the time, the program amounts to a class on financial responsibility for which the check writers may have to pay more than $200 — often far more than the value of the bounced check. Some portion of these fees, depending on the contract, is then funneled to the district attorneys’ offices.

In the case of one of the largest check diversion companies, the Consumer Financial Protection Bureau (CFPB) found that less than one percent of cases were examined by a prosecutor for possible criminal prosecution. In practice, prosecutors merely review a monthly list of bounced checks and the check-writer’s name and address, without evaluating why the bank returned the check unpaid or the check writer’s intent.

A System That Breeds Coercion and Abuse

With little government oversight, debt collectors, backed by arrest warrants and wielding bounced check demand letters, can frighten people into paying money that may not even be owed. Few tools are as coercive or as effective as the threat of incarceration. One 75-year-old woman subsisting on $800 monthly Social Security checks, for example, went without her medications in order to pay the fees she believed were required to avoid jail time for bouncing a check. And as one lawyer in Texas, who has sought arrests of student loan borrowers who are in arrears, said, “It’s easier to settle when the debtor is under arrest.”

The people who are jailed or threatened with jail often are the most vulnerable Americans living paycheck to paycheck, one emergency away from financial catastrophe. In the more than 1,000 cases reviewed by the ACLU, many were struggling to recover after the loss of a job, mounting medical bills, the death of a family member, a divorce, or an illness. They included retirees or people with disabilities who are unable to work. Some were subsisting solely on Social Security, unemployment insurance, disability benefits, or veterans’ benefits — income that is legally protected from outstanding debt judgments.