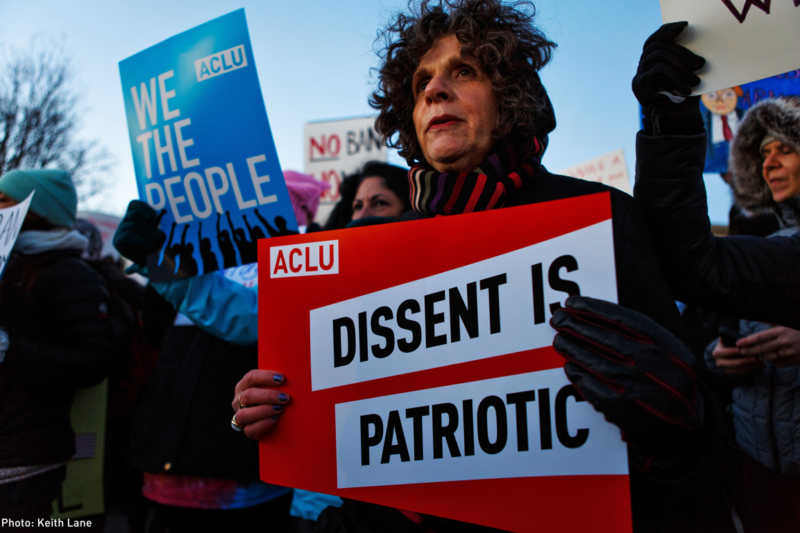 The last several weeks have been breathless and agonizing — but also exhilarating — for us at the ACLU.

Breathless because President Trump began actually putting his unconstitutional campaign promises into reality. Agonizing because his policies have begun impacting peoples’ lives. And exhilarating because of how the public has responded to our opposition to his policies.

Before President Trump took office, many believed that his proposed plans were simply campaign rhetoric and that he wouldn’t actually try to implement such blatantly un-American and unconstitutional policies. But if there is one thing we have learned since his inauguration, it’s that he is intent on making his promises a reality. He showed that with the executive orders to crack down on immigrants, with his pick for the Supreme Court, and with a Muslim ban, which we were able to stay in federal court the day after he imposed it.

In the coming days and weeks, President Trump will likely issue executive orders curtailing LGBT and reproductive rights. We anticipate that the Trump administration will ratchet up the detention and deportation machinery that will tear families apart. Communities will be profiled and targeted based on their skin color or perceived national origin. He may also move to defund Planned Parenthood. Taken together, Trump’s policies have the potential to affect the lives of millions of Americans in heartbreaking ways. And when this happens, we will go to court to defend the constitutional rights of immigrants and citizens alike — just like we have these past two weeks.

This is what we do. It’s why the ACLU was created.

The day Trump took the oath of office we filed a Freedom of Information Act request demanding any and all government documents that addressed conflicts of interest and violations of the Emoluments Clause of the U.S. Constitution. We did so because President Trump has refused to sell or place his businesses in a blind trust. We are now searching for a business competitor to Trump who would have standing to challenge the violation of the Emoluments Clause.

There is no limit to how big a resistance to Trump we can build at the ACLU.

During Trump’s first week in office, we filed a constitutional challenge to Trump’s Muslim ban. We now have several cases challenging its constitutionality — including in New York, Massachusetts, and Maryland. Just last week, 50 ACLU affiliates filed coordinated Freedom of Information Act requests seeking information from Customs and Border Protection field offices about how the Muslim ban was interpreted and implemented at airports across the country. And we have another lawsuit in the works to file the minute Trump tries to allow federal government employees and agencies the right to discriminate in the areas of LGBT and reproductive rights under the guise of religious freedom.

The protests across the country — in the streets and at airports and courthouses — have been truly exhilarating. I was stunned to come out of the courthouse in Brooklyn following our emergency hearing last week to stop the Muslim ban and find hundreds of people chanting, “A-C-L-U! We are here to stand with you.”

The public response to our opposition to the policies and orders of President Trump has been astonishing. Almost 1 million people have made online donations to the ACLU. Our membership has now more than doubled since the election. The spontaneous public support to our work has also swelled the list of our activists. More than 1 million have signed up to follow us on Facebook, and our Twitter following has tripled.

All in, we have received over $79 million in new contributions online since the election, with the average donation being $79, which for many is a significant chunk of money. This surge of contributions towards our annual $220 million budget will allow us to scale up in significant ways to build a war chest for future battles.

We plan to spend over $40 million to build up our state offices. Among advocacy groups, the ACLU is the only organization with boots on the ground in every state. Even as we fight at the federal level, the front lines may well be in Florida, Texas, Ohio, Pennsylvania, and Georgia — critical states with large populations that decide the trajectory of national politics. The second tier of priority states for growth is Arizona, Colorado, Kansas, Michigan, Missouri, North Carolina, and Virginia. Already, we see anti-reproductive rights laws, anti-immigrant bills, and anti-Muslim policies being introduced in state legislatures.

We are also taking a close look at those states where the politics are in flux — where our advocacy can be particularly impactful as people go to the polls to vote in the near future. This infusion of $40 million into our state offices will turn into 100 new ACLU staff positions in places where litigators and advocates can make a real difference.

We also plan to spend over $13 million to build a grassroots member-mobilization program. With the surge of new members, we now have a growing army of people who don’t just want to write a check. They want to join the fight. We will be asking our volunteers and members to join our team and partner with us to do grassroots calls-to-action, local town halls, lobby days, acts of protest, and engagement on our core priorities. Ultimately, we want to have our membership surpass that of the National Rifle Association. We are now half the size of the NRA, but with continued growth, mobilization, and activism, we can build an even bigger force across a broader range of issues.

We plan to spend over $21 million to hire new lawyers, advocates, and other staff in the headquarters of the ACLU to strengthen the core functioning of the headquarters. We are still the David to the government’s Goliath. We have 300 litigators on payroll nationwide — 100 of them in our headquarters. The government has over 19,000 lawyers on its payroll. 11,000 of them belong to Jeff Sessions’ Justice Department if he’s confirmed as the next attorney general.

I am confident that we will win many of our cases. Even in those that we might lose, our litigation will frame the controversies for the public to understand and engage with us in the advocacy. At the very least, if we carpet-bomb the Trump administration with lawsuits, we can rob it of momentum and gum up the machinery of its anti-civil liberties and anti-civil rights agenda. This litigation is expensive and time-consuming. The average case takes between two and three years, with some lasting a decade or more. As we ramp up our litigation and advocacy, we need to have the staying power to keep up after President Trump all four years and beyond.

Finally, we will spend $5 million in infrastructure, new office space, and expansion of operations to get this work done. This overhead pays for database systems to house our growing membership base and new office space to accommodate new staff. Rest assured that we will put the bulk of the money into real programs: Our program/management ratio is 86 percent program, 14 percent management, including fundraising.

We are poised to launch a full-throttle response to whatever lies ahead over the next four years. There is no limit to how big a resistance to Trump we can build at the ACLU. It has been our history for over 97 years to fight the worst assaults against justice, equality, and democracy. It is our mission — our mandate — to rise to that challenge again.

With your help, we will continue to do so.