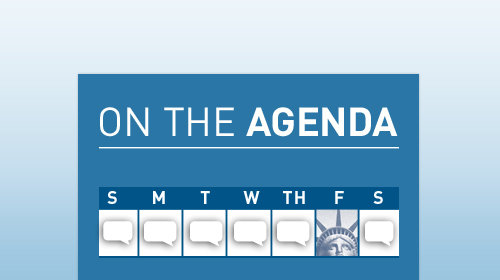 Whether you spent your weekend watching the Tony Awards, the Belmont Stakes, or the NBA finals, the important thing to keep in mind is that even though the weekend is over there is still plenty of excitement to be had in the days ahead.

Yes, the Heat and the Spurs will be facing off again on Tuesday, but we’ve got bigger things in mind. From DHS oversight to Sentencing Reform, there’s a lot happening in Washington this week. Here’s a quick look at what’s on the calendar:

Sentencing Reform
Senior Legislative Counsel Jesselyn McCurdy will testify before the U. S. Sentencing Commission on retroactive application of the recent amendment to the Drug Quality Table in the Sentencing Guidelines. The Amendment, which was agreed to by the Commission earlier in May, revises the guidelines applicable to drug trafficking offenses by lowering the base offense levels in the Drug Quantity Table.

Employment
The Subcommittee on Workforce Protections of the House Education and the Workforce Committee will hold a hearing titled “The Regulatory and Enforcement Priorities of the EEOC [Equal Employment Opportunity Commission]: Examining the Concerns of Stakeholders.”

Religion/Belief
The House Judiciary Subcommittee on the Constitution and Civil Justice will hold a hearing titled “The State of Religious Liberty in the United States.”

Border
The House Homeland Security Committee is expected to markup the Customs and Border Protection Authorization.

Immigration
The Senate Judiciary Committee will hold an oversight hearing on the Department of Homeland Security.

First Amendment
The Communications and Technology Subcommittee of House Energy and Commerce Committee will hold a hearing titled “Media Ownership in the 21st Century.”

FBI Oversight
The House Judiciary Committee will hold an oversight hearing of the Federal Bureau of Investigation.