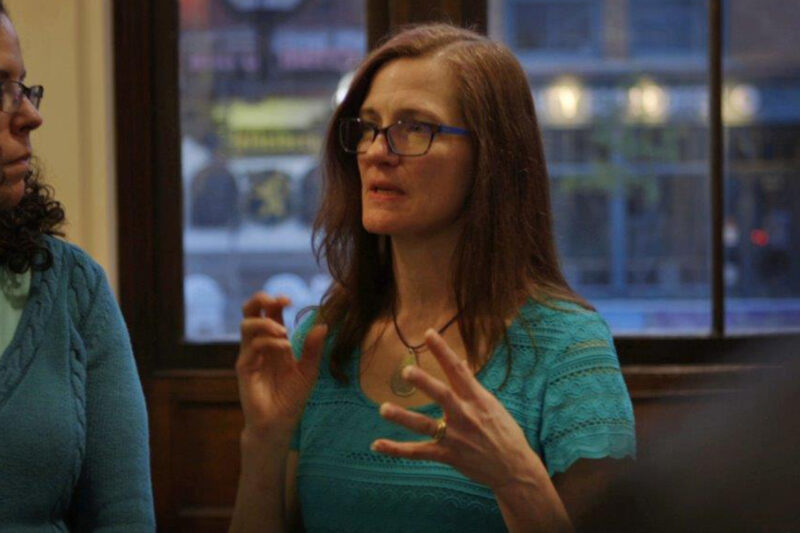 Four months ago, activists and volunteers all over the country came together to launch the People Power movement, seeking to bring meaningful policy change to their local communities and the nation.

Melissa Bruzzano of Ann Arbor, Michigan, was one of those volunteers, and she immediately joined People Power’s “Freedom Cities” campaign to help prevent the Trump administration’s immigration agents from tearing families apart. Melissa and the 1,200 People Power activists in the Ann Arbor area worked to persuade the City Council to adopt the ACLU “9 Model Rules” word-for-word. These rules, which govern the actions of local police, are designed to protect immigrant communities from discrimination, surveillance, and unjust deportations.

Melissa’s path to activism began at the Women’s March in January. She had “never been politically active,” she says. “My life was pretty good, and so I just sat on the proverbial couch watching it all go by.”

That changed at the march.

“A man and a friend hoisted me up a tree about 12 feet off the ground so I could get a look at the crowd,” Melissa said. “I didn’t know what to do once I got up there. Everyone was watching me so I started chanting, ‘This is what democracy looks like’ and ‘Hell no, we won’t go.’ When I got down, a lady in a hijab hugged me and said something like ‘Are you with the ACLU?’ . . . . And here I am.”

Washtenaw County is one of many places where change has taken root.

A few months later, Melissa and her fellow activists made change happen in Ann Arbor, and they didn’t stop at the city level. They also met with and attended hearings of the Washtenaw County Board of Commissioners, convincing the board to not only adopt similarly protective rules, but also to provide public funding for legal defense and other assistance for immigrants facing deportation.

So far, People Power volunteers have had nearly 1,000 meetings with local law enforcement officials — in addition to meetings with mayors, city council members, and county commissioners — to press for the adoption of immigrant-friendly, constitutionally sound policies.

Volunteers have also made their voices heard on other immigration-related issues.

Wendy Snyder, an activist in Pinellas County, Florida, has continued to protest Donald Trump’s Muslim ban because, she says, it “is hurting the people who need to emigrate the most. These are people who are trying to flee their war-torn country.” And Robert Coffey, from Mount Vernon, Washington, participated in May Day marches because immigrants “have earned the right for respect and civil treatment in our community.” Other volunteers have worked with ACLU state affiliates to support bills that would expand immigrant protections statewide — like SB 54 in California and the Safe Communities Act in Massachusetts. They’ve helped to kill anti-immigrant bills like LD 366 in Maine, and they are working to defeat SB 4 – the “show me your papers” bill in Texas.

Beyond leading the charge on immigration, People Power activists have fought relentlessly to stop health care bills that would eliminate coverage for millions of Americans, attending more than 150 events nationwide; worked to oppose the roll back of “net neutrality” protections by rallying against plans by the FCC to let cable companies control what we see on the Internet; canvassed in Washington State to prevent an anti-transgender “bathroom” ballot initiative from qualifying for the November ballot; and demanded that state lawmakers safeguard reproductive freedom by taking the fight to the Capitol in Jefferson City, Missouri.

Part of the work of safeguarding civil liberties is also strengthening communities, and People Power activists are carrying that baton as well. In Minneapolis and St. Paul, Minnesota, Lisa Burke and other volunteers attended naturalization ceremonies to ensure that new citizens understand how welcome they are. And in Allentown, Pennsylvania, a potluck dinner in June drew more than 100 people, following Nadia Hassani’s “Cooking-with-a-Hyphen” idea to bring together people of diverse political, racial and religious backgrounds.

It’s through these small steps and large ones that People Power volunteers are making communities more just, more humane, more American. In a few short months, thousands of citizen activists, joined together in a common commitment to freedom and fairness, have brought about real and lasting policy changes. Imagine how much more could be done as this movement grows.