Obama Promised Transparency on Drones, But We're Still in the Dark 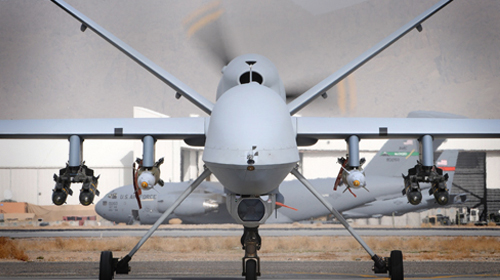 Targeted killings have been a central part of U.S. national security strategy for more than a decade, but the American public still knows scandalously little about who the government kills, and why. Today we’re filing a new lawsuit in our continuing fight to fix that.

The CIA and the military use drones to target suspected “militants,” “insurgents,” and “terrorists” in at least half a dozen countries. American drone strikes have killed thousands of people abroad, many of them children. The program has engendered pervasive fear and anger against the United States in countries where the attacks frequently occur.

Our government’s deliberative and premeditated killings – and the many more civilian deaths from the strikes – raise profound legal and ethical questions that ought to be the subject of public debate. The Obama administration has made numerous promises of greater transparency and oversight on drones. In his 2013 State of the Union address, President Obama pledged to make lethal targeting “more transparent to the American people and the world” because “in our democracy, no one should just take my word for it that we’re doing things the right way.”

But the administration has failed to follow through on these commitments to openness, and it is continuing to withhold basic information­. When it has released anything – or been compelled to by lawsuits – discussion of crucial aspects of the program have been omitted or redacted. This lack of transparency makes the public reliant on the government’s self-serving and sometimes false representations about the targeted-killing program.

That’s why today the ACLU filed a new lawsuit to enforce a Freedom of Information Act request asking for basic information on the program, including records on how the government picks targets, before-the-fact assessments of potential civilian casualties, and “after-action” investigations into who was actually killed.

The ACLU has made some headway for transparency. We are litigating two other FOIA lawsuits seeking information about targeted killings. One of them is about the strikes that killed three Americans in Yemen: Anwar al-Aulaqi, his 16-year old son Abdulrahman, and Samir Khan. Despite the public promises of openness, the government has continued to fight tooth-and-nail against releasing documents in those cases – or in some instances, even admitting that it has any documents at all.

In both cases we have won important rulings in federal appeals courts, forcing the government to release some documents, including a 41-page Justice Department Office of Legal Counsel memo addressing the legal theories that were the basis for the extrajudicial killing of Anwar al-Aualqi. The belated publication of the memo was an important victory for transparency, which led to a broad and long-overdue debate about the lawfulness of the government’s targeted-killing program and, in particular, of the lawfulness of the government’s deliberate and pre-meditated killing of a U.S. citizen. But the memo­ – almost a third of which was redacted – leaves many questions unanswered.

For example, the memo doesn’t explain the government’s definition of imminence, the circumstances that would make “capture infeasible” (and therefore, according to the government, lethal targeting permissible), or the reasons for the government’s targeting decisions. Worse, it point to a whole body of secret law that the administration continues to shield from the American public.

The administration’s subsequent gestures towards transparency are just as scant. The public summary of the secret Presidential Policy Guidance – which sets new standards for lethal targeting – relies on the same conclusory definitions as the Office of Legal Counsel memo. In a major speech at the National Defense University in 2013, the president asserted that “before any strike is taken, there must be near-certainty that no civilians will be killed or injured – the highest standard we can set.” But multiple investigative reports contradict this assurance. The government could dispute these findings, but instead it chooses to keep nearly all the details about how the program works hidden from view.

We aren’t giving up. One of the most important aspects of our new lawsuit is that it covers more recent documents, including the Presidential Policy Guidance under which the targeted killing program likely now operates.

The government’s drone program lives far too deep in the shadows. As long as the government continues its campaign of secret, unacknowledged lethal strikes across the globe, we will fight to subject this policy to the scrutiny and debate it deserves.