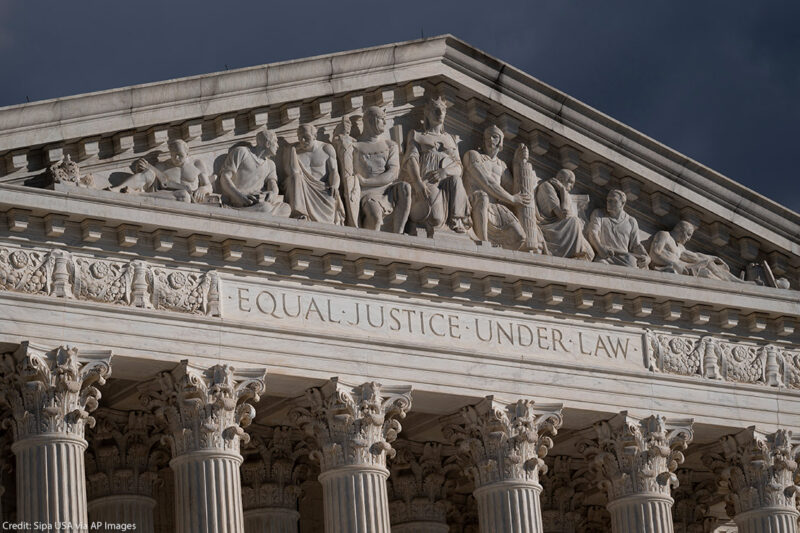 Why does the Biden administration's Department of Justice continue to rely on cases that presume people in the territories are “alien races” composing “savage tribes”?

Over 100 years ago, the U.S. Supreme Court issued a series of rulings known as the Insular Cases that still prevent millions of people — overwhelmingly, people of color — from accessing certain constitutional rights and protections. These rulings continue to uphold systemic racism today.

In the Insular Cases, the Supreme Court spoke to whether, and to what extent, the rights and protections guaranteed by the Constitution applied to residents in the then-new territories of Guam, Puerto Rico, and the Philippines. In this string of cases decided from 1901 to 1922, the court described the territories’ inhabitants as “alien races” and “savage tribes.” The court based its views squarely on the presumed racial inferiority of the non-white people who lived there. In doing so, the Supreme Court showed obvious contempt for the predominately Asian, Black, Indigenous, Latinx, and Pacific Islander residents of these territories.

The Insular Cases are unabashedly racist, firmly rooted in white supremacy, and still haunt the day-to-day lives of millions of people. This is why today, the ACLU, along with a coalition of civil rights groups, sent a letter to the Biden administration urging them to condemn these cases and stop relying on the precedent they set in present or future cases.

As usually understood, these decisions held that constitutional provisions and safeguards do not automatically apply to people living in the territories. The rationale for that view was explicitly race-based. In the leading Insular case, Downes v. Bidwell, the court considered whether the phrase “United States,” as used in a specific constitutional provision, included Puerto Rico. Informed by disdain for Puerto Rico residents, the court said it did not. The opposite result — acknowledging the Constitution fully applied in Puerto Rico — was too alarming to consider. As one justice put it, doing so would “inflict grave detriment to the United States,” indicating that affirming constitutional rights applied to people in a predominantly BIPOC-populated territory would be a threat to the broader country.

Since the United States’ founding, there was a long-held presumption that the Constitution’s protections would naturally apply in the nation’s territories. The court broke away from this practice with the Insular Cases to keep the new territories from enjoying full constitutional protections. When the U.S. acquired Florida in 1819, for example, few seriously questioned whether the Constitution applied there. Key differences between territories acquired before 1898 and those acquired later — particularly the people who lived there and their location — made all the difference to the court.

The later-acquired territories were, for the first time, populated mostly by people of color and so far from the U.S. mainland that they were unlikely to be settled by white people. To ensure the Constitution would not block U.S. expansion, the court made up a new doctrine — so-called “territorial incorporation” — that said some constitutional provisions and protections could be switched off in those islands and for those residents until Congress said otherwise.

Despite many justices criticizing this doctrine in the ensuing 120 years, the “territorial incorporation” doctrine still effectively allows federal courts to question, on a case-by-case basis, whether certain protections apply to the territories’ residents. In one 2016 case, a federal court wrongly cast doubt on the constitutional right of same-sex couples to marry in Puerto Rico. In another recent decision, a federal court of appeals held that U.S. agents did not need a warrant to search a person’s property as it arrived to the U.S. Virgin Islands from South Carolina. Because it was a so-called “unincorporated territory,” the court reasoned Congress could establish an “artificial customs border” between the U.S. Virgin Islands and the rest of the United States that would infringe on the rights of any person passing through.

Reliance on these racist cases must end. Unfortunately, the U.S. Department of Justice, a key voice federal courts regularly hear from, continues to depend on them. It hasn’t yet seen fit to renounce them, as it did with Korematsu v. United States, a case that rested on similarly odious racial assumptions. Instead, the DOJ relies on the Insular Cases even as it acknowledges, as it did recently at oral argument before the Supreme Court, that their reasoning and rhetoric are “obviously anathema,” alluding to the racist origin of the very doctrine the DOJ continues to rely on when convenient. This reliance on case law grounded in white supremacy contravenes the Biden administration’s stated goals of redressing systemic racism.

While dismantling systemic racism is a necessary but complicated goal, the Insular Cases give the Biden administration a perfect opportunity to back up words with action. The DOJ should publicly condemn the Insular Cases and stop relying on them in future court filings. The department’s refusal to disavow them when recently invited to do so by the Supreme Court perpetuates a painful legacy akin to Jim Crow, and risks undermining its credibility on issues of race. The presumed inferiority of territorial residents is archaic, offensive, and racist. It was wrong at the time of the Insular Cases, and cannot justify differential treatment today.