Who Invented Your Genes? 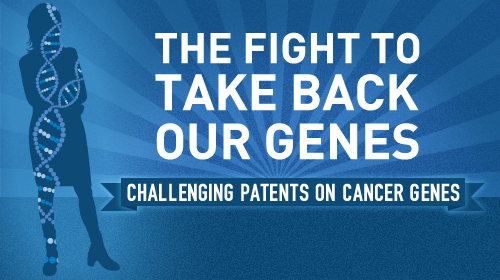 Who invented our genes? There are many possible answers to this question, but I’m pretty sure your answer wouldn’t be, “Myriad Genetics.”

But that question is at the heart of our ongoing challenge to patents Myriad controls on two human genes called BRCA1 and BRCA2, which are associated with inherited risk of breast and ovarian cancer. We all have these genes, but people with certain mutations are much more likely to experience cancer in their lifetimes.

Myriad argues that it invented the BRCA genes once it “isolated,” or removed, the genes from the rest of our genome. It then obtained patents on the “isolated” genes, which give them exclusive rights to stop all clinical testing and research done on the genes. As a result of its patents on the genes, Myriad has forced all other laboratories in the U.S. to stop sequencing these genes when providing patients with their own genetic information, even when those laboratories would use different, more comprehensive, or lower priced testing methods.

Myriad did make an important contribution to scientific knowledge. It identified these genes and found a number of the mutations that are related to breast cancer risk. But it was not alone.

A new film, Decoding Annie Parker, tells the story of Dr. Mary Claire-King, a geneticist who made the breakthrough discovery of the location of the BRCA1 gene and its connection to hereditary breast cancer, after years of research. It was Dr. King who named “BRCA1,” and it was her work that laid the foundation for Myriad’s sequencing of the gene. It also tells the story of Annie Parker, a Canadian breast cancer patient whose mother and sister died of the disease, and who searched for answers about why her family was so deeply impacted.

Yet despite the contributions of Dr. King and her team, other scientists from around the world, patients, and millions of dollars in federal funding, Myriad was allowed to obtain its exclusive rights to the BRCA genes.

The Supreme Court has said consistently that patents on products of nature and laws of nature are invalid, because allowing such patents stand in the way of scientific progress and innovation. If Einstein had patented the theory of relativity, or James Watson and Francis Crick had patented DNA’s double-helical structure, entire fields of knowledge and scientific and technological work would have been blocked. We are asking the Court to apply its precedents to our case, and rule once and for all that human genes cannot be patented simply because they have been removed from the body.

BRCA1 and BRCA2 are only two of the estimated 20 percent of human genes that have been patented. How the Supreme Court rules matters not only to patients like Annie Parker who have family histories of breast and ovarian cancer, but to all of us who want physicians and scientists to be free to offer the best options in medical care and pursue the most promising avenues of research.

Decoding Annie Parker will have its premiere screening in New York City on April 2, with proceeds benefitting the American Cancer Society, Facing Our Risk of Cancer Empowered, and other groups. Sandra will be participating in the Q&A that follows the screening. Tickets are available here.