A Tale of Two Countries: Racially Targeted Arrests in the Era of Marijuana Reform 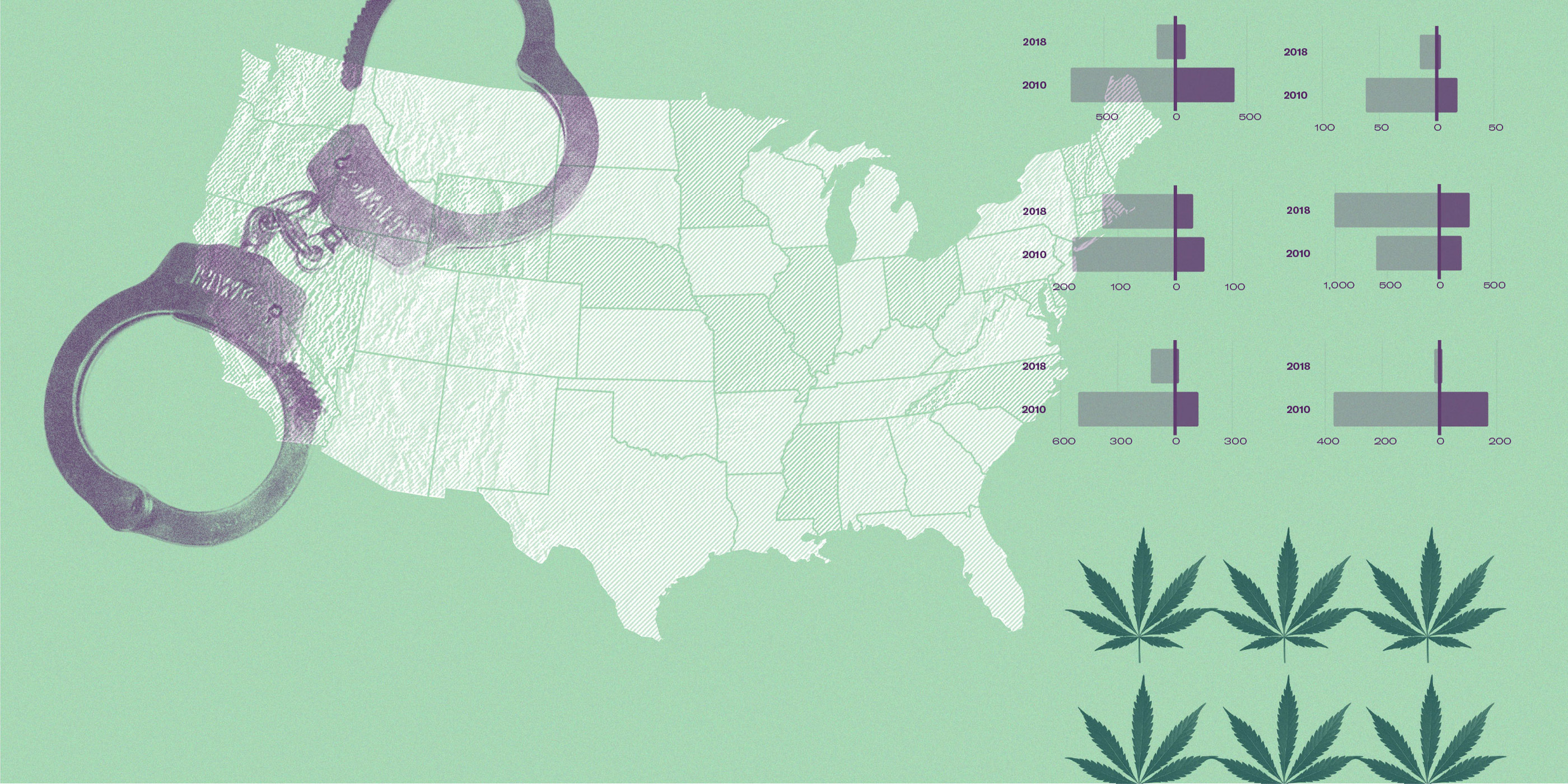 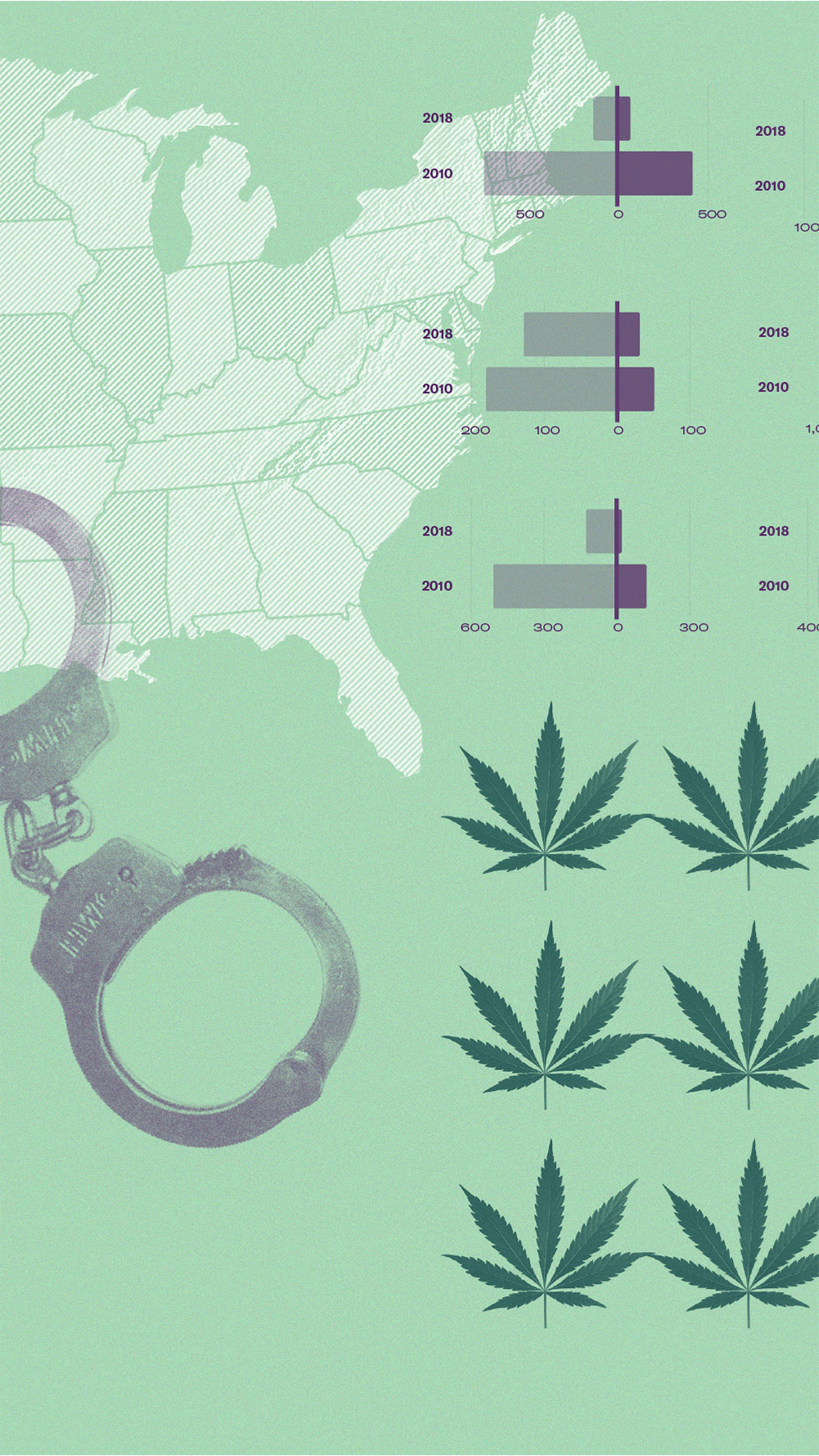 Marijuana arrests clog the criminal legal system with people who should not be there. This puts even more people in harm’s way as COVID-19 threatens to devastate jails and prisons, where the virus can spread rapidly. Officials must respond by reducing both arrests and the incarcerated population. Learn more.

For decades, marijuana laws have been used to criminalize Black and Brown people, waste taxpayer money, and fuel the mass incarceration crisis. However, states across the country are taking strides toward reforming these outdated and harmful policies. Eleven states and the District of Columbia have legalized marijuana, and 18 states have decriminalized, which means they’ve removed some of the criminal penalties for possession of small amounts. These reforms are driven in large part by the will of the people. Two out of three Americans — more than ever before — now support marijuana legalization.

Legalization is still the answer, but it isn’t enough. Racial disparities in arrests persist nationwide and have not improved in recent years, and overall marijuana arrests are still widespread. To investigate these trends, we break down the data in our new report, A Tale of Two Countries: Racially Targeted Arrests in the Era of Marijuana Reform, along with a new interactive data visualizer spotlighting statistics down to the state and county level.* Here’s what we found:

The nationwide war on marijuana rages on

While overall marijuana arrests have decreased at the national level since 2010, the rate of decline has stagnated and, in recent years, has even reversed upwards despite popular reform movements. Marijuana arrests are still widespread nationwide, making up 43 percent of all drug arrests — more than any other drug. The vast majority of these arrests — nine out of 10 — are for possession.

These are more than just numbers. The personal impact of marijuana arrests can be devastating. In many states, a marijuana arrest can carry life-altering collateral consequences: parents may lose their children in court proceedings; disabled and low-income recipients of public benefits may lose health care; immigrants can face deportation; families can be evicted from public housing; and finding a job can be difficult and outright impossible in some cases. Because of racism in our criminal justice system, Black and Brown communities disproportionately face these harmful repercussions.

There are fewer arrests in states that legalized or decriminalized marijuana

Overall, the relaxing of marijuana laws, whether by legalization or decriminalization, coincides with lower average arrest rates for both sales and possession. States that legalized or decriminalized marijuana saw fewer marijuana arrests from 2010 to 2018 (in legalized states, you can still be arrested for possessing over a certain amount of marijuana, selling marijuana, using marijuana in prohibited places, or possessing while underage). Meanwhile, states in which marijuana remains fully illegal have higher arrest rates.

Legalized states had the lowest arrest rates of all, but the impact varies depending on the jurisdiction. In some states, such as Maine, arrests clearly decreased after legalization. In others, like California, arrests did not change or simply followed a downward trend that began before legalization.

Extreme racial disparities in marijuana arrests persist, even in legalized or decriminalized states

War on Drugs policies disproportionately target people of color and particularly Black people, and marijuana laws are a prime example. The proof is in the data: Nationwide, Black people are 3.6 times more likely than white people to be arrested for marijuana, despite similar usage rates. That’s roughly the same rate of disparity that existed seven years ago, when we released the first iteration of this report, The War on Marijuana in Black and White. In fact, since 2010 racial disparities actually worsened in 31 states.

Police often target people based on race rather than reasonable suspicion of criminal activity.

Even though legalized and decriminalized states saw a decrease in arrests overall, this does not seem to affect racial disparities, which remain. Black people are still more likely to be arrested for possession than white people in states that have legalized or decriminalized marijuana. Clearly, legalization and decriminalization alone are not enough to reverse the disproportionate harm the War on Drugs has caused to Black people and other people of color.

Racial profiling among law enforcement is directly to blame for these disparities. Police often target people (for stop and frisk, search, and arrest) based on their actual or perceived race rather than reasonable suspicion of criminal activity. Minor offenses — including marijuana possession — are aggressively enforced in communities of color while these same offenses are rarely enforced in more affluent, predominantly white communities. The result is the disproportionate arrest and incarceration of people of color, and particularly young people of color, who can wind up entangled in the criminal legal system with lifelong implications because of a minor offense.

Legalization is not enough

The war on people who use marijuana is still wreaking havoc in much of the U.S., particularly against people of color. States that legalized or decriminalized marijuana have seen fewer arrests and lower racial disparities on average, even though trends in the data vary widely.

States must legalize marijuana, and do so as a matter of racial justice. This means not only legalizing marijuana with the specific goal of undoing some of the harms of decades of racist criminal legal policies, but pursuing broader reforms in the criminal legal system to ensure that the harms of the war on marijuana do not simply re-materialize in other ways after legalization.

Actual racial disparities could be even higher.

We must take on the war on marijuana as a whole. When states legalize, they must center legalization in racial justice by seeking to repair past harms wrought on communities of color by marijuana prohibition and ensure that people of color have opportunity and access to the burgeoning marijuana marketplace. Upon legalization, states should offer expungement and re-sentencing for past convictions, so that hundreds of thousands of people — disproportionately Black and Brown — do not remain marginalized for prior offenses. It’s also important that states not continue to use marijuana laws to over-police youth and instead decriminalize or de-penalize youth marijuana offenses to prevent funneling more young people into the criminal justice system. States also must not replace marijuana prohibition with a system of civil fines and fees.

We must include police reforms in legalization efforts. Law enforcement must take crucial steps toward ending racial profiling and harassment of Black communities, which has been a staple of the broken criminal legal system. That means ending “consent” searches that disproportionately target people of color. Police — and the federal government, which gives grants to state and local police — must also stop using raw numbers of stops, citations, summons, and arrests (including of marijuana) as a metric to measure productivity. States must divest from law enforcement as a way to solve problems and instead invest in non-punitive job, treatment, and public health programs and community-based services.

Prosecutors must also play a role in ending racially-biased marijuana enforcement. Just as police must end selective enforcement of criminal laws against Black and Brown people, prosecutors should refuse to move forward with marijuana arrests generally, and with any arrests that are targeted disproportionately at communities of color.

Finally, we need better data. In order to enact meaningful reform and conduct proper oversight, states need to develop systems for the routine collection of accurate data on policing. Unfortunately, the existing gaps in data do not paint a full picture of what’s going on.

There’s also significant variation in the quality of reporting across years, agencies, and places, which leaves gaps in the data that make it difficult to quantify racial disparities at the local level. Further, limitations in FBI data make it difficult to examine these disparities, particularly in regards to Latinx and multiracial people. The FBI does not count Latinx as a racial category and instead puts Latinx individuals in other racial categories — for example, Black or white. Data on white arrests thus might include many Latinx individuals, which would inflate the white arrest rate and mean that the actual racial disparities between arrests of white people and people of color is even higher.

While some states have made significant progress on marijuana reform, and the data shows that arrests are much lower in states that have legalized marijuana, marijuana prohibition is still the norm, resulting in almost 700,00 marijuana arrests in 2018 alone. Further, racial disparities in marijuana possession arrests persist everywhere, and legalization by itself is not enough to end such disparate treatment of people of color. Only by centering racial justice in marijuana legalization, enacting more comprehensive reforms, and getting better data, can we not only get an accurate picture of the state of marijuana enforcement, but forge a more effective path forward.

* The report excludes Florida and Washington, D.C. because state and district officials do not submit comprehensive data to the UCR and either refused to provide the ACLU with data or did not respond to our FOIA requests in a timely manner.