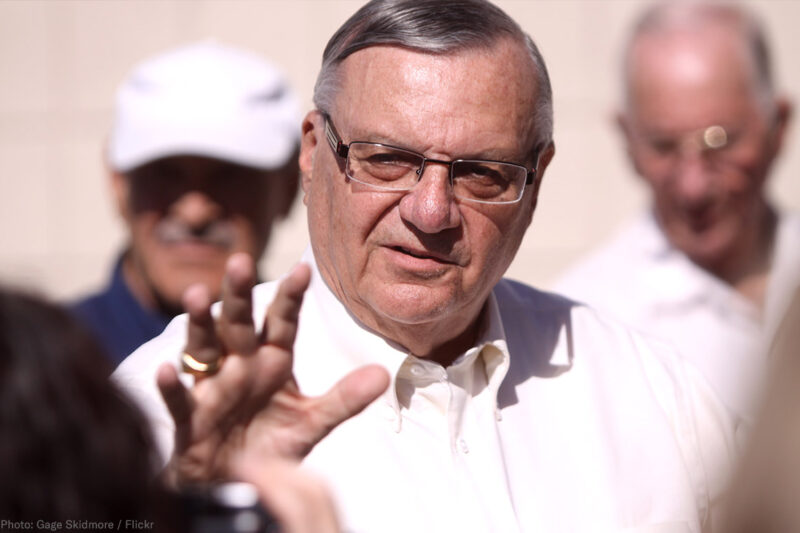 Last year, former sheriff Joe Arpaio was convicted of criminal contempt after he defied a federal judge’s order to stop racially profiling and unlawfully detaining Latino residents of Maricopa County, Arizona. Less than a month later, President Trump pardoned Arpaio, claiming that he is “loved in Arizona” and “was treated unbelievably unfairly.”

Fresh from his pardon, Arpaio decided to run for U.S. Senate following the retirement of Republican Sen. Jeff Flake. He is now a candidate in the Aug. 28 Republican primary.

The ACLU does not endorse or oppose candidates for office, but we are committed to informing voters about Arpaio’s stances on issues like immigrant rights, racial justice, and criminal justice reform. This summer, we plan to mobilize activists to take steps to educate voters about Arpaio’s political positions and his record as Maricopa County sheriff.

Get the facts about Joe Arpaio’s record

Arpaio’s candidacy has major implications for Arizona and the country, as the president attempts to take his harmful policies nationwide. Trump has not only tried to whitewash Arpaio’s record, but he has also championed the disgraced ex-sheriff’s horrific tactics: attacking immigrant communities, defending racial profiling, and encouraging brutality from law enforcement.

Long before the Trump administration erected a tent city detention camp for migrant children in Texas, Arpaio had his own “Tent City,” a brutal, outdoor holding pen that he once proudly referred to as a “concentration camp.” People who encountered Arpaio’s detention system faced gruesome conditions and humiliating practices, and they were denied basic necessities and health care. For instance, female inmates reported that officers made them sleep in their own menstrual blood and assaulted pregnant women.

For years, the ACLU fought Arpaio’s discriminatory conduct, including his office’s cruel and inhumane treatment of detainees and its practice of illegally detaining people based on their perceived immigration status and discriminating against Latinos in traffic stops. The ACLU won a preliminary injunction and then a trial ruling in its class-action lawsuit to stop Arpaio’s illegal traffic stop policies. A federal judge issued a civil contempt order against Arpaio in 2016 due to his repeated flouting of court orders in the ACLU case. And in a separate criminal proceeding before a different federal judge, Arpaio was convicted in 2017 of criminal contempt as well because his contempt of court was willful and deliberate.

Naturally, Arpaio is a vocal supporter of Trump’s anti-immigrant agenda, including the border wall, and an opponent of legal protections for undocumented people brought to the U.S. as children. DACA recipients, he said, should be deported. Arpaio’s Republican opponents hold similar views on immigrant justice issues. Former state Sen. Kelli Ward is a longtime opponent of immigration reform and DACA, while Rep. Martha McSally recently shifted to take positions hostile to immigrant rights.

No pardon or praise from the Trump will ever wash away Arpaio’s legacy of discrimination and abuse. We fully intend to make sure that Arizona voters learn about the record and stances of the real Joe Arpaio.