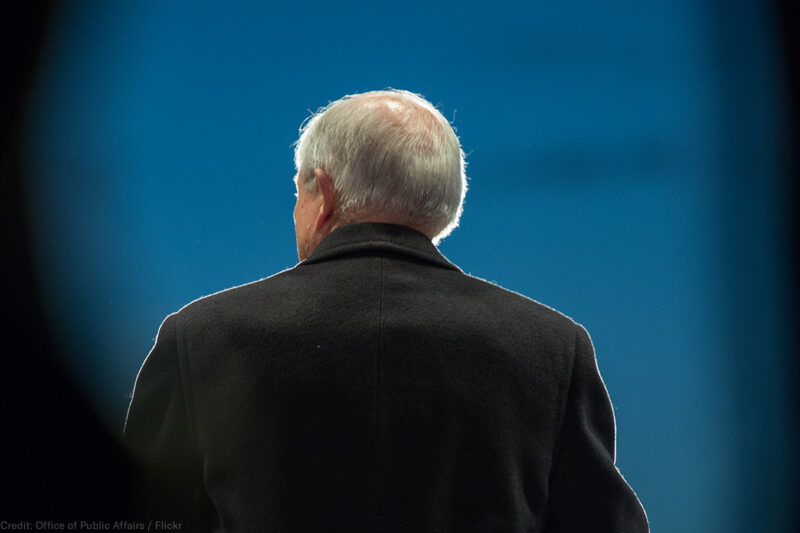 On Wednesday, the Trump administration bid farewell to one of its most infamous members: Attorney General Jeff Sessions. In his brief tenure, Sessions managed to dismantle and rescind an astounding range of efforts by prior administrations to protect civil rights and civil liberties and introduced new policies that endanger some of the most vulnerable citizens in the U.S.

From his draconian approach to immigration policy to his efforts to erase protections for transgender people to his many moves to dismantle his predecessors’ attempts to decrease the federal prison population, the list of Sessions’ offenses is long. We’ve rounded up some of the former attorney general’s most egregious actions below to showcase Sessions’ contempt for civil rights and liberties.

Sessions did everything in his power to speed up deportations and aid the separation of families, issuing a series of policies that trampled on due process. The Justice Department ended a program to notify immigrants of their rights during deportation cases, set arbitrary and unreasonable quotas for immigration judges, and repeatedly overruled immigration court and Board of Immigration Appeals’ decisions on his own initiative.

This summer, the former attorney general attracted criticism from U.S. District Judge Emmet Sullivan for requiring victims of domestic violence seeking asylum to meet a nearly impossible threshold during the asylum screening process. Following the summary deportation of two ACLU clients, a woman and her child who fled rape and other brutality in El Salvador, Judge Sullivan asked: “Somebody in pursuit of justice who has alleged a credible fear in her mind and is seeking justice in a United States court is just spirited away?” He went on to order the government to “turn the plane around” and return our clients to the U.S.

In September, the ACLU published a first-person account of a survivor of domestic violence from Mexico who was granted asylum prior to the introduction of Sessions’ new policy. “People like me come from countries where the police and justice system do not protect women and girls,” she wrote. “For the United States to deny us refuge says our lives mean nothing.”

Under Sessions, the Justice Department also made a series of increasingly desperate attempts to bully states and localities into colluding with its draconian detention and deportation agenda, in spite of being repeatedly blocked by the courts. And Sessions fully endorsed Trump’s decision to end the DACA program, which provides protection from deportation to hundreds of thousands of undocumented young people who came here through no fault of their own. Sessions maintained that the relief, granted by the Obama administration, was an “unconstitutional exercise of authority by the Executive Branch.”

Sessions’ efforts to dismantle civil rights and civil liberties protections gained during prior administrations are especially apparent when it comes to criminal justice. He rescinded multiple Obama-era memos, including one that directed federal resources away from enforcing federal drug laws in states that have legalized medical or recreational use of marijuana. The move was part of the former attorney general’s fear-driven agenda to reinvigorate the War on Drugs and to systematically dismantle his predecessors’ efforts to reduce federal imprisonment rates. Among those efforts was Sessions’ directive to prosecutors to bring the harshest possible cases against defendants — including people like Marion Hungerford, a mentally ill woman who was sentenced to 159 years in federal prison for helping to commit a string of armed robberies, even though she never touched the gun.

In May, Sessions falsely claimed that the settlement between the ACLU of Illinois and the Chicago Police Department was to blame for hundreds of deaths and shootings in the city. The landmark agreement followed the release of a groundbreaking report documenting officers’ unlawful use of stop and frisk. Sessions’ assertion that abiding by the Constitution increases crime is unsupported by the evidence and deeply flawed as a matter of principle.

Throughout his tenure, Sessions resisted efforts to make the work of prosecutors more transparent and fair. Just last month, the Justice Department opposed the release of an opinion by the Tennessee Board of Professional Responsibility that required federal prosecutors working in the state to disclose all information favorable to criminal defendants.

Sessions also sought to limit the work of the Justice Department’s Civil Rights Division. Efforts to seek justice for people killed during police encounters have been dismissed, such as when the Justice Department declined to pursue federal civil rights charges against the officers involved in Alton Sterling’s death, or have been stonewalled, as in the prolonged civil rights investigation into the killing of Eric Garner.

Under prior attorney generals, the Justice Department undertook numerous civil rights investigations into local police departments and entered into consent decrees seeking to end racially discriminatory police practices in places such as Seattle; Los Angeles County; New Orleans; Baltimore; Newark; East Haven, Connecticut; and Ferguson, Missouri. But with Sessions’ arrival, an era of systemic police reform in cooperation with the federal government came to an end. In a March 2017 memo, Sessions instructed Justice Department officials to stay out of local police officers’ business. He has also ended a critical community policing program formerly used to address racial profiling and other issues, such as excessive use of force. And just before Sessions tendered his resignation on Wednesday, he signed a memo making it harder for the Justice Department to enter into consent decrees with police departments accused of civil rights and liberties abuses.

Shortly after Trump was inaugurated, Sessions began systematically reversing hard-won legal protections for transgender people. In February 2017, the Justice Department revoked a guidance issued in 2016 by the U.S. Departments of Education and Justice on the rights of transgender students under Title IX.

In May 2018, the former attorney general took his efforts to dismantle protections for transgender people into the criminal justice system when he introduced a new policy mandating prison placements based on assigned sex at birth, except in rare cases. The policy, which endangers transgender people in prison, replaced a former rule, which required that gender identity — a person’s authentic, core understanding of their own gender — play a central role in whether a person is held in a male or female prison.

In October of this year, the Justice Department filed a brief with the Supreme Court attacking an appeals court decision in favor of our client Aimee Stephens. Aimee, a transgender woman, was fired from her job of six years at a funeral home after coming out to her employer. After Aimee sued the funeral home, the Court of Appeals for the Sixth Circuit ruled for her in March, stating that discrimination against transgender people is a form of sex discrimination that violates Title VII of the Civil Rights Act of 1964. “No one should be fired because of who they are,” Aimee wrote for us in October.

Sessions disagrees. The Justice Department’s critique of the appeals court reflects its ongoing attack on transgender people. And last year, Sessions declared that transgender people would no longer be protected from sex discrimination under Title VII, changing the rules for all federal programs. Attacks like these bolstered an October announcement that the Trump administration plans to eliminate nondiscrimination protections for trans people found in federal civil rights law by changing the definition of “sex.”

When career civil rights attorneys in the Justice Department refused to sign on to efforts by the administration to roll back voting rights, Sessions — who once called the Voting Rights Act “intrusive” — simply cherry-picked political appointees to work on those issues instead.

Following Sessions’ forced resignation, Trump quickly moved to place Matthew Whitaker as acting attorney general. Whitaker, a lawyer and former prosecutor, was Sessions’ chief of staff. There is little reason to believe that he will not follow in his predecessor’s footsteps on issues of civil rights and civil liberties. All those who care about civil liberties and civil rights will need to keep a close eye on the Justice Department. Sessions’ tenure was a disaster, and his replacement promises more of the same.