President Trump, Stop and Frisk Is Both Unconstitutional and Ineffective 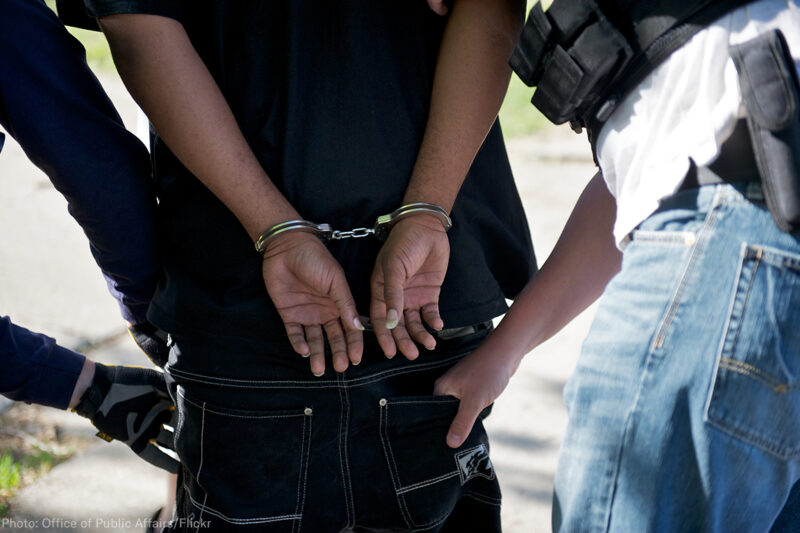 On Monday, President Trump gave a speech to the nation’s police chiefs. Like so many of his “law and order” speeches, it was fueled by bravado and falsehoods.

In the speech, Trump defended stop-and-frisk policies that have been ruled unconstitutional and rejected by communities in numerous cities. He also urged the city of Chicago to “try to change the terrible deal the city of Chicago entered into with ACLU” on tracking the use of stop and frisk. Trump railed against “efforts from politicians to shackle local police departments” by limiting their cooperation with ICE, and he touted his record of providing surplus military equipment to local police departments.

Trump’s distortions must be called out one by one. Here is a breakdown of the most dangerous falsehoods in his speech:

Trump claim: “Before I took office less than two years ago, our nation was experiencing a historic surge in violent crime.”

According to the Brennan Center for Justice, the U.S. violent crime rate peaked in 1991 and has remained stable at about half that rate for the past several years. In 2016 and 2017, the violent crime rate remained essentially stable at near the bottom of this three-decade downward trend, and preliminary indications are that these low crime rates are continuing to remain stable and low.

In other words, there was no historic surge in violent crime because crime was stable at historically low levels when Trump first took office.

Trump claim: Indiscriminate stop-and-frisk “works, and it was meant for problems like Chicago,” which is why he is asking Attorney General Sessions to “work with local authorities to try to change the terrible deal the city of Chicago entered into with ACLU, which ties law enforcement’s hands.”

Aside from being ineffective in limiting crime, indiscriminate stop-and-frisk is unconstitutional, results in enormous racial disparities, erodes community trust in the police, and makes people of color less likely to report crimes. A 2013 study by the Vera Institute of Justice found that each time a young person is stopped and frisked by police, it makes them 8 percent less likely to report a future violent crime against them to police. Nearly 60 percent of the young people surveyed by the Vera Institute stated that they would not feel comfortable asking a police officer for help if they were in trouble.

That’s why the ACLU has repeatedly sued to end indiscriminate stop-and-frisk policies. We’ve reached settlements that require police to abide by constitutional limits in their stop-and-frisk activities in Milwaukee, New York City, and Philadelphia. Meanwhile, our 2015 settlement in Chicago required data collection and oversight of stop and frisk, and we are pushing for adoption of a broader consent decree there.

Notably, none of these lawsuits seek to prohibit all police stops and frisks. They simply require that these actions be supported by the reasonable suspicion required by the Fourth Amendment and prohibit racially biased patterns of enforcement that are patently unconstitutional.

Trump claim: “[S]anctuary city policies force the release of criminal aliens and gang members right back onto our streets, putting innocent civilians at grave risk — many people being killed.”

So-called “sanctuary city” policies are not targeted at people who have committed crimes, quite the contrary. They are intended to safeguard immigrant victims of crime — particularly survivors of sexual assault, trafficking survivors, and domestic violence survivors — by ensuring that they trust police enough to report these crimes to local authorities without being turned over to Immigration and Customs Enforcement.

This claim is not a one-off, but, in fact, part of Trump’s long-running campaign to bully local communities to become extensions of the federal deportation system. While the Trump administration claims that its continued harassment of these jurisdictions is driven by public safety concerns, we know that’s just an excuse. In fact, pro-immigrant jurisdictions have lower rates of crime than jurisdictions that actively assist federal immigration agents.

Trump claim: His administration’s new policies providing surplus military equipment to local police departments is just “making sure you have the equipment you need to do the job.”

Trump is referring here to the 1033 program, which came under heavy criticism from the ACLU and others for providing weapons of war — including bayonets, grenade launchers, and armored vehicles — to local police departments. After the nation expressed horror at these weapons of war being turned on protesters at Ferguson, President Obama imposed much-needed controls on the 1033 program, including prohibiting certain military-grade weapons altogether and requiring police departments to account for how armored vehicles and other war gear were being used.

President Trump rescinded all of these rules last year, leaving no controls or limits in place. Trump’s policies are not providing necessary equipment. Instead, they are ensuring that local law enforcement agencies will have a free hand to treat their communities like war zones, with zero oversight or accountability.

Once again President Trump has the facts wrong. And along with his Attorney General Jeff Sessions, Trump is attempting to roll back recent reforms and promote the kind of race-based, unconstitutional police abuse that recently gave rise to the Black Lives Matter movement. Indiscriminate stop and frisk is just one of those practices, and it needs to end across the country, not get an endorsement from the White House.