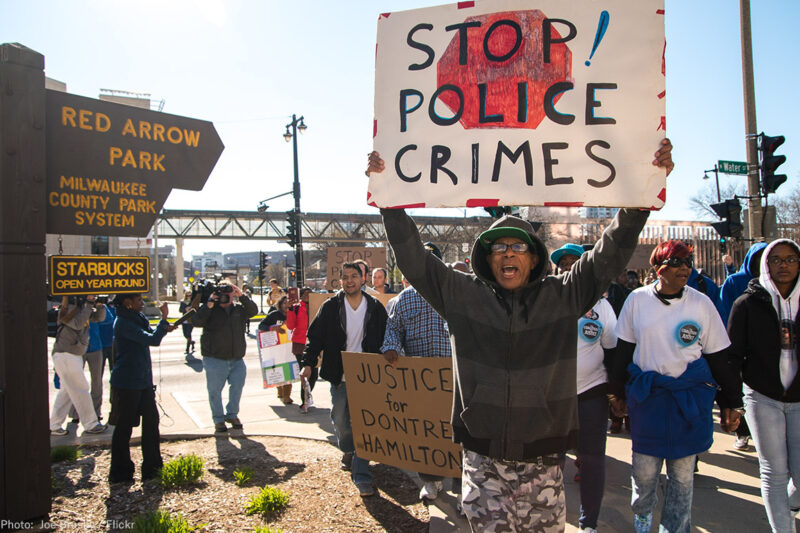 In a banner day for police reform, the city of Milwaukee has entered into a settlement agreement to end practices amounting to a decade-long stop-and-frisk program that resulted in hundreds of thousands of baseless stops as well as racial and ethnic profiling of Black and Latino people citywide. The agreement provides a roadmap for how the Milwaukee Police Department and Fire and Police Commission must reform to protect the constitutional rights of the people they serve.

The reforms are local, but the implications are national. This settlement sends a signal to police departments across the country about how to remedy stop-and-frisk practices that wrongfully criminalize people of color.

The reforms in Milwaukee are the result of the settlement of Collins v. City of Milwaukee, a 2017 lawsuit brought by the ACLU and the law firm of Covington & Burling LLP on behalf of Black and Latino people, including a military veteran, a grandmother, students, and a state legislator. Each of the plaintiffs was stopped or stopped and frisked by Milwaukee police when doing nothing wrong.

Our plaintiffs were not alone.

The ACLU has documented that Milwaukee police target Black and Latino people for baseless stops. Adding to this documentation, expert evidence in the Collins case showed that Milwaukee police conducted hundreds of thousands of pedestrian and traffic stops between 2010 and 2017 without the reasonable suspicion required by the Fourth Amendment. Another expert report in the case found that traffic and pedestrian stop rates in Milwaukee were more than six times higher for Black people than for white people, even after accounting for crime rates and additional factors other than race and ethnicity that could impact those stop rates.

After a year and a half of litigation, the plaintiffs have achieved a settlement that requires a decisive shift towards measures to promote evidence-based and bias-free policing. These changes are overdue in a city where Black and Latino people have long protested being singled out for unlawful police stops and frisks when going about their daily lives.

The settlement mandates reforms that are expansive and profound. It requires the overhaul of how police conduct and report stops and frisks in Milwaukee. The settlement also compels the city to take concrete steps to ensure that police stops and frisks are supervised and monitored and that officers who conduct unlawful encounters are counseled, retrained, or disciplined. And the City must sustain the Community Collaborative Committee, a group of community members who will meet regularly with Milwaukee police and the City’s Fire and Police Commission to provide input on policing strategies and their impact on the public.

Cities and towns across the United States should do what Milwaukee is now required by the settlement to do — conduct internal and external audits to ensure that stops and frisks are supported by the reasonable suspicion required by the Fourth Amendment. If stops and frisks do not meet this standard, officers must be disciplined for violating the Constitution. Only a true embrace of evidence-based policing and accountability measures can guard against policing based on bias in violation of the 14th Amendment’s basic guarantee of equal protection of the law. And to work for all of us, policing depends on law enforcement efforts based on evidence, not stereotypes or bias.

Milwaukee now joins other cities that have embarked on stop-and-frisk reform, either as a result of litigation or in response to calls by communities of color for evidence-based policing. These include Minneapolis, Philadelphia, Chicago, and New York, where community activism and multiple lawsuits have brought about significant reforms (see here, here and here). The wide-ranging reforms resulting from this case add to this wave of change and reflect a rightminded discrediting of the use of vast numbers of baseless stops and frisks as a law enforcement tool.

Enforcing the reforms in Collins v. Milwaukee in the coming years will require continued vigilance by the courageous plaintiffs in this case and the broader community of Black and Latino people impacted by stop and frisk, as has been true in New York and Chicago. But it is precisely this ongoing input and oversight of police by the communities they serve that can ensure the promise of police to serve and protect truly extends to all communities — no matter the color of their skin or their accent — in Milwaukee and beyond.