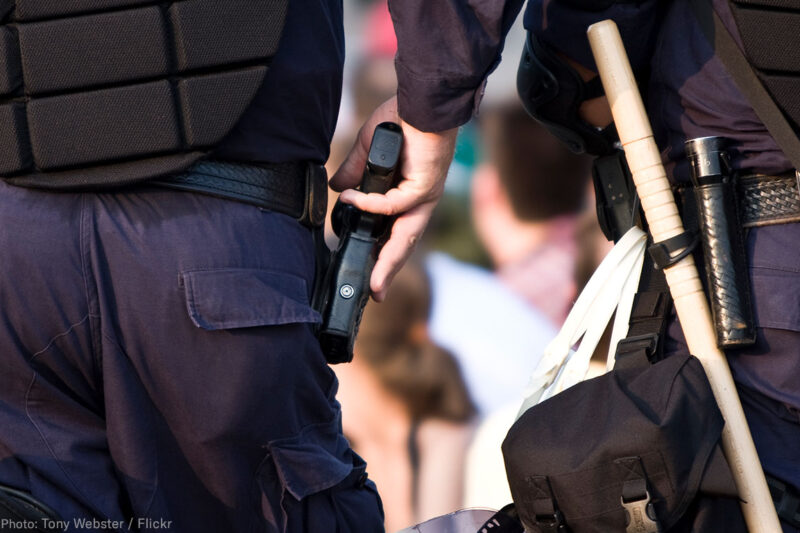 The Supreme Court just ruled that a police officer could not be sued for gunning down Amy Hughes. This has vast implications for law enforcement accountability. The details of the case are as damning as the decision. Hughes was not suspected of a crime. She was simply standing still, holding a kitchen knife at her side. The officer gave no warning that he was going to shoot her if she did not comply with his commands. Moments later, the officer shot her four times.

“Shoot first and think later,” according to Justice Sonia Sotomayor, is what the officer did.

As Sotomayor argued in dissent, the court’s decision in Kisela v. Hughes means that such “palpably unreason­able conduct will go unpunished.” According to seven of the nine Justices, Hughes’ Fourth Amendment right to not be shot four times in this situation is less protected than the officer’s interest in escaping accountability for his brazen abuse of authority. According to Justice Sotomayor, “If this account of [the officer’s] conduct sounds unreasonable, that is because it was. And yet, the Court … insulates that conduct from liability under the doctrine of qualified immunity.”

Worse yet, this decision wasn’t a surprise. And it certainly isn’t an aberration.

In fact, it is just the latest in a long line of cases in which the Supreme Court has decimated our ability to vindicate constitutional rights when government actors overstep. And when law enforcement oversteps, as was the case with Hughes, the consequences can be devastating.

As Professor William Baude explains, “[t]he doctrine of qualified immunity prevents government agents from being held personally liable for constitutional violations unless the violation was of ‘clearly established’ law.” If any reasonable judge might have deemed the action permissible, the law is not “clearly established.” Essentially, if you want to sue a police officer who you think violated your constitutional rights, you first have to convince the court that what happened to you was so outrageous that no reasonable person could have thought it was okay.

This makes excessive force cases a steep uphill battle. Such cases turn on the Fourth Amendment — a constitutional right that is notorious for its murky and context-specific contours. So proving a Fourth Amendment violation is hard enough on its own. When you have to prove a “clearly established” violation, the task becomes all but impossible because the Supreme Court keeps raising the bar. This further disempowers those injured or killed by police, and their surviving families.

Let’s examine the evolution of the term.

In 1982 it meant that “a reasonable person would have known” an action was unlawful. Fast forward to 2010 and “clearly established” meant that “every ‘reasonable official would have understood that what he is doing violates that right.’” The difference between “a” and “every” may seem technical, but, as Dean Chemerinsky and the late Judge Stephen Reinhardt explained, this change marks the difference between a measured fair notice standard under which it was possible to hold law enforcement accountable and what we have now: a system that “protects all but the plainly incompetent or those who knowingly violate the law.”

Qualified immunity has become a misnomer. It should be called what it is, as Justices Sotomayor and Ginsburg did in their dissent from last week’s opinion. It is an “absolute shield.”

This absolute shield subverts the basic principles of our legal system. It’s supposed to be harder to hold someone criminally liable than civilly liable, but is it? If you unknowingly commit a crime and the government wants to put you in prison for it, you can’t use your ignorance of the law as a defense. But if an officer makes “a mistake of law” by unreasonably gunning you down in your own backyard, that officer gets to use the defense of qualified immunity to avoid paying damages in a civil case.

It doesn’t take a law degree to know this is absurd.

Furthermore, it turns out the doctrine of qualified immunity has no legal basis in the first place — the courts simply made it up. So how can it possibly be justified?

The Supreme Court has told us that the doctrine “balances two important interests—the need to hold public officials accountable when they exercise power irresponsibly and the need to shield officials from harassment, distraction, and liability when they perform their duties reasonably.” That maybe sounds okay in theory, but Hughes’ case is just the latest to show us that in reality, there is no balance and there is no accountability.

The court’s qualified immunity doctrine contributes to the deep deficit in police accountability throughout our country, which disproportionately threatens and ends the lives of people of color, people with mental or physical disabilities, and members of LGBTQ communities. We are collectively holding law enforcement to the lowest standard of performance, when we should instead incentivize better, smarter, and more humane policing.

The result of the court’s decision is clear. Our right to not be unreasonably shot by the police is less protected, and therefore less important, than the court’s interest in shielding police officers from civil liability for their abuses of authority.