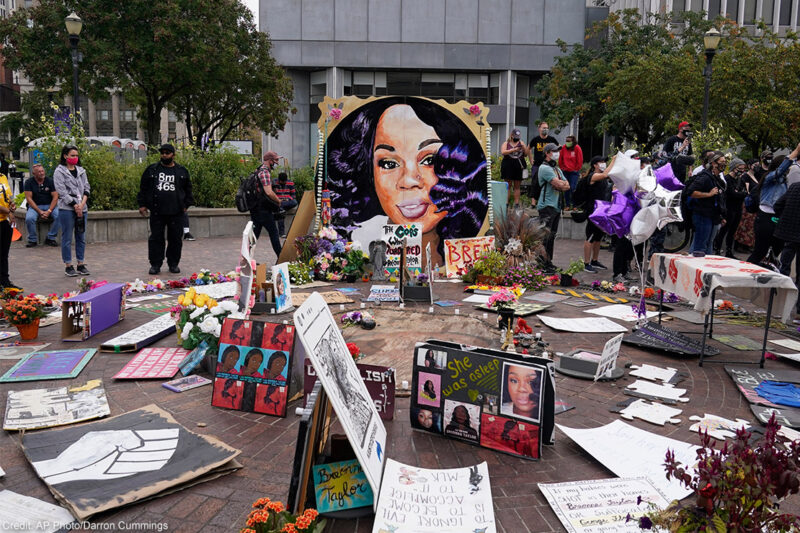 People are rightfully losing faith in the law’s ability to deliver justice. Here’s what prosecutors could do to fix that.

This OpEd was first published in Slate.

Americans have just completed another round of one of our grimmest national rituals: shaking our heads while cops who killed an unarmed Black person get away with murder. This time the victim is Breonna Taylor, whose name has galvanized nationwide protests for racial justice, but whose family will receive no justice themselves. Yesterday, Kentucky Attorney General Daniel Cameron announced a single charge from the grand jury against only one of the three officers involved in her shooting, and even that was for shooting a wall, not Breonna Taylor. The other two will walk. And a community that has already waited six months for closure will just keep waiting.

Many are rightly pointing out that these cops should not avoid charges based on self-defense when they created the danger in the first place. Accordingly, whether the grand jury result makes sense under the criminal law will be hotly debated in the coming days. But even when there is substantial evidence of wrongdoing, police officers are almost never prosecuted, let alone convicted. And with each press conference announcing that an officer’s actions were justified, the public’s faith in the law — and in the prosecutors tasked with enforcing the law — erodes just a little bit more. Prosecutors often claim they are simply hamstrung by the law, which does confer a great deal of protection on police. But there are many actions a prosecutor can take to create lasting, systemic police accountability—if they want to maintain any credibility with the people they’re supposed to serve.

Prosecutors—both the local elected versions and Attorneys General at the state level—can and must do so much more. The work starts well before an officer causes harm.  The everyday working relationship between police and prosecutors is inherently conflicted; prosecutors rely on police for case leads and in-court testimony, and police need prosecutors to win cases and boost clearance rates.  (Sadly, trial wins and not public health outcomes are still the coin of the criminal justice realm.)  Prosecutors must institutionally separate themselves enough from police to judge them objectively.  This means refusing police union donations during their own elections.  It means mandatory reporting of cops to ethics investigators when the cops screw up.  It means putting a hard stop on lobbying in lockstep with police unions to thwart reform, as prosecutor associations so often do.

Prosecutors who are serious about accountability should also lobby for efforts like civilian oversight of police, shrinking law enforcement—including their own offices—and reinvesting in communities.
Second, prosecutors till the ground for police violence when they ignore or actively cover up misconduct or corner-cutting in everyday cases. This happens all. The. Time. For example, right after a suspect is arrested, prosecutors have to decide whether to take the case forward or “screen” it out. A substantial number of those cases involve uncorroborated police testimony, manufactured defendant resistance, outright violence or coercion, or just plain uncertainty.  If prosecutors go along to get along, taking virtually all those cases forward (even if they drop them later), this validates predatory police tactics that ought to be discouraged. As that case moves forward, a prosecutor may also offer the defendant a deal to plead guilty to lesser charges, which then avoids judicial scrutiny of police misconduct. The prosecutor may also knowingly allow the officer to lie on the stand, a practice so common it’s got a nifty portmanteau: testilying. Don’t believe that these underhanded tactics occur? Consider that Louisville prosecutors offered Breonna’s ex-boyfriend, Jamarcus Glover, a supremely lenient plea deal if he would just implicate Breonna in an “organized crime syndicate.” This was a dirty trick to smear her name and bolster the cops’ story—and it only failed because Glover, heroically and against his own interest, turned down the deal.

These day-in, day-out violations of public trust are virtually impossible to catch, but help create the bond between police and prosecutor that makes independence so difficult. To stop it, elected prosecutors and legislators need to ratchet up the professional penalties for prosecutors who cover for their friends to the detriment of the community. And we need to create standalone legal proceedings—a sort of constitutional small claims court—for victims of police misconduct that don’t depend on the prosecutor to represent those victims.

Finally, when police do commit violence against the American people, prosecutors at the local, state, and federal levels must inflict far more fulsome, lasting accountability that is not limited to criminal prosecution.  Of course, the local prosecutor and maybe even the state AG, who all work directly with the offending cops, should be recused from any criminal investigation; this much is table stakes.  Any appointed, independent prosecutor should also consider foregoing a secret grand jury so the community can be confident that they made the strongest possible case.  (We are already seeing calls for AG Cameron to release the grand jury evidence in Breonna’s case.)

But then the state Attorney General or the US DOJ should open a mandatory civil rights investigation that results in both resignation and decertification of the individual officers plus systemic changes to the office. That settlement would also require the local prosecutors to put the officers on a standing, public list and commit not to call them to testify in any case going forward. Police chiefs and mayors often complain that union contracts and arbitration makes firing bad cops so hard. Prosecutors can and should do it for them. And they should do it regardless of whether a grand jury returns an indictment.

Of course, prosecutors won’t altruistically take on all these reforms voluntarily. These fundamental changes would make churning out convictions much more difficult, would strain their mutually beneficial relationship with the cops, and create more red tape. But that strain and that red tape is worth preventing the senseless loss of another Black life. The people marching in the streets can push both police and prosecutors to to conjure a vision of justice broader and deeper than criminal prosecution.  Breonna Taylor deserves it.  We all do.