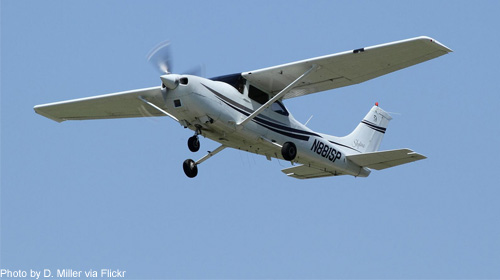 The ACLU is filing a Freedom of Information Act (FOIA) request today for information about a newly revealed Marshals Service program that uses aircraft to suck up location data from tens of thousands of people’s cell phones at a time.

The U.S. Marshals Service program, exposed last week by the Wall Street Journal, involves Cessna planes equipped with “cell site simulators” flying from at least five airports around the country. Cell site simulators, also called IMSI catchers, impersonate a wireless service provider’s cell tower, prompting cell phones and other wireless devices to communicate with them instead of the nearest tower. In doing do so, the simulators can learn all sorts of information that facilitates accurate location tracking, including the electronic serial numbers and other information about the phone and the direction and strength of the phone’s signal.

According to the Wall Street Journal, the dirtboxes are used in criminal investigations. The problem is that, during each flight, a dirtbox is able to collect data from tens of thousands of cell phones. And, inexplicably, that is pretty much all we know about this program. That is why we are filing a FOIA request on this technology.

The Marshals Service program has drawn widespread expressions of concern, for example prompting two U.S. Senators to demand information from the Attorney General about the extent of airborne cellphone interception and its effects on innocent bystanders. But the Marshals Service is not the only agency in the federal government deploying this technology on aircraft. For example, U.S. Immigration and Customs Enforcement puchased an “Airborne Flight Kit” for a Stingray II cell site simulator as early as 2010. And we know at least a dozen federal agencies use cell site simulators, as well as dozens of state and local police departments across the country (many of them are mapped here).

Despite the public interest and significant constitutional questions raised by IMSI catchers, law enforcement agencies continue to pretend the technology is a secret. The Department of Justice would neither confirm nor deny that the U.S. Marshal Service dirtbox program exists. The FBI is trying to keep local and state law enforcement agencies from disclosing their use of Stingrays by forcing the agencies to sign nondisclosure agreements.

This is unacceptable — law enforcement must not purchase and deploy such powerful new technologies without the public’s knowledge and input. Americans can only debate the merits and legality of new surveillance programs if we know they exist. Resistance against the government’s secret, overzealous use of cell site simulators is spreading, and will surely grow as we learn more about these programs. The press has responded with major front page stories. Judges are pushing back in the courtroom. State and federal legislators are asking questions and considering regulation. It is time for the government to stop trying to suppress this debate, and recognize the public’s right to information.