Calls For a Constitutional Convention Heating Up in the States 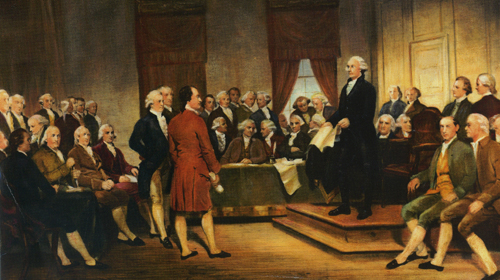 Many of the proposals are centered on attempts to alter the Constitution to require a federal balanced budget amendment, and in some cases to impose term limits on federal officeholders. So far we’ve heard of such proposals in Arkansas, Idaho, Nebraska, Virginia, and West Virginia. Apparently, these bills are based on a common model bill circulated by ALEC, the conservative-leaning American Legislative Exchange Council. From the other side of the political spectrum, legislatures in several states including California, Illinois, and Vermont have already called for a constitutional convention to address campaign finance issues.

As someone who works on new technology and the lightning-fast succession of issues that it raises, I sometimes fantasize about going hog-wild at a constitutional convention to clarify our right of privacy and other fundamental protections that have not kept up in the digital age. The Fourth Amendment is a fine expression of the basic need for privacy in a democracy, but the courts move slowly in adapting it to modern conditions. It took more than 40 years, for example, for the Supreme Court to apply it to the technology of the telephone — and its extension to email and other digital-age mediums is proceeding painfully slowly.

After all, our Founders probably never imagined that we would still be relying so heavily on their original document over 200 years later. While some, like Madison, favored caution, others — Thomas Jefferson in particular — scorned excessive reverence for the things we inherit from prior generations. Jefferson, for example, wrote that “A little rebellion, now and then, is a good thing, and as necessary in the political world as in the physical.” He suggested it would be a bad sign for liberty if there weren’t a rebellion every twenty years or so, even though such rebellions might be misguided. Furthermore, he argued in 1789, “No society can make a perpetual constitution, or even a perpetual law. The earth belongs always to the living generation.” After his presidency he wrote,

Some men look at constitutions with sanctimonious reverence, and deem them like the arc of the covenant, too sacred to be touched; who ascribe to the men of the preceding age a wisdom more than human, and suppose what they did to be beyond amendment…. Let us follow no such examples, nor weakly believe that one generation is not as capable as another of taking care of itself, and of ordering its own affairs…. Each generation is as independent as the one preceding, as that was of all which had gone before.

And there is too much evidence that contemporary policymakers have forgotten the wisdom of the Founders, particularly when it comes to the need for checks and balances on government power. Congress, for example, has allowed the NSA and other national security agencies to balloon to giant size while failing to create oversight mechanisms anything close to proportional to those agencies’ powers. It has allowed executive branch secrecy to spiral out of control and be used repeatedly to protect abuses of power. And our lawmakers have enacted civil asset forfeiture laws that fail obvious tests of attention to incentive structures and institutional counterbalances. Where our Founders had a sophisticated and healthy distrust of power — extending as we’ve seen in Jefferson’s case even to the power of “reverence” — such distrust is today too often forgotten by supporters of our giant security state, and ironically we must rely on just such reverence to obtain what protections we can.

These are some of the reasons why the ACLU as an organization has a formal policy opposing the calling of a constitutional convention. Jefferson warned of “lethargy, the forerunner of death to the public liberty,” and thought it was healthy that rulers be “warned from time to time that their people preserve the spirit of resistance.” As frightening a prospect as a convention gathered to monkey around with our Constitution is, part of me does like the feisty “spirit of liberty” that such calls represent. But I want that spirit of liberty to find outlet through efforts in Congress and our courts to rein in the national security state.

The Washington Post has published an article on this trend, reporting that three states have actually passed resolutions calling for the convention: Alaska, Georgia, and Florida, and that seventeen others are considering legislation.